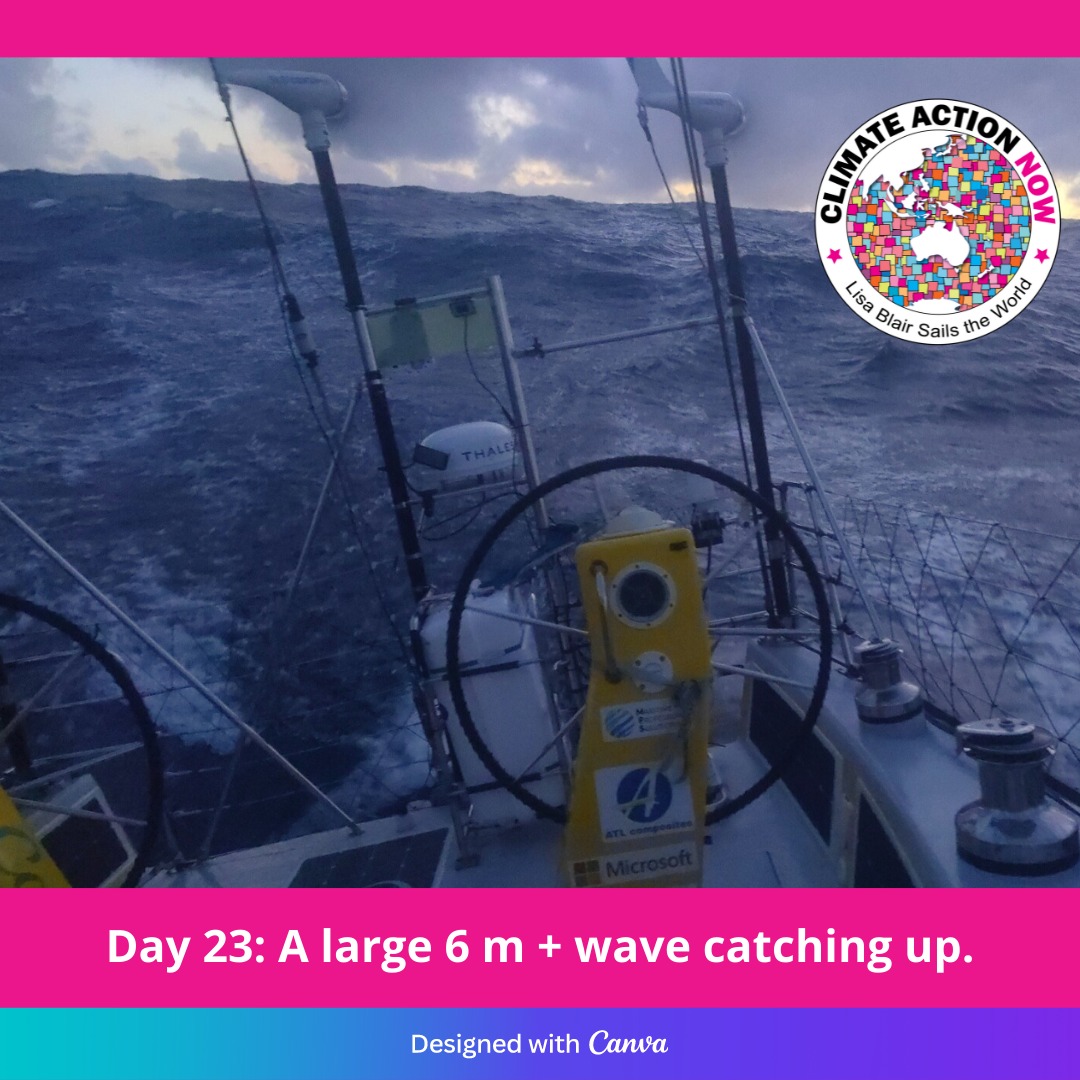 In her latest blog post, Blair tries to catch up on some much needed rest and Climate Action Now records its top boat speed so far.

Well last night thankfully didn’t turn out to be quite as bad as expected but it was still a very roily night.  I wrapped up my computer updates and it was nearly 3am by the new time zone that I am working on which is UTC-11 and I was finally ready for bed.  The winds had by now started to build from the west, so it was time to look at putting the no 2 jib away and putting in the third reef in the mainsail.

The winds were mostly a lovely 25 knots but then a squall would arrive, and we would be then getting bullets of wind up to 37 knots.  The benefit of it being during squalls is that it wasn’t sustained at those high number for long so the sea state, while impressively large, never deteriorated to the point of becoming dangerous.  By the time I had shortened the sails and actually made it to bed the winds were averaging 30 knots but I felt like the wind to sail ratio was nicely balanced aboard Climate Action Now and so I was quite comfortable in climbing into my sleeping bag.

It was now the early morning, and I could just see the first tinges of light as the sun started to rise coming in through the hatch. While I was very tired, and so ready for sleep, it was hard to come by.  Mostly because every time I was drifting off, we would cop a knock down from one of those building waves and Climate Action Now would be suddenly on her side, the alarms off the B & G Auto pilot system beeping at me and I would no longer be in my bed but laying in the lee cloth that was stopping me from flying out.

Climate Action Now would shudder as she shook off the impact and then suddenly, we would be careening off the next wave and surfing along at 15 knots again like nothing had happened. I really have become so desensitized to these types of conditions, or maybe I just trust my amazing boat impeccably, because afterwards I would settle back on my bunk and keep attempting to sleep.

These knock downs were occurring in different severity almost every 20 minutes and while it didn’t feel dangerous, it was rough.  I opted to spend most of the day in bed trying to nap and make up for the many days of little sleep.  I find in these conditions once I have done the sail changes, and everything is bedded down, there is actually very little I can do except to try and keep myself in a protected corner of the boat and brace for the knock downs.

Being inside the boat you can’t see the wave coming, but you do get use to the feeling of weightlessness that hits just before impact as you are lifted up on the peak of a seven or eight metre wave.  The thing is, the ocean is by its very nature unpredictable, so as a safety precaution I will limit my time in open areas of the boat while the seas are this large.

If we were struck by a rogue wave in these conditions it would be a 10-15 metre wave and would carry enough force to roll the boat. So I limit my potential of risk of injury by either hanging out in my bunk with the lee cloth up or in the navigation station which is a small confined area of the boat so you can’t get thrown far.

I laid in bed until close to 3 pm napping or reading my book on my kindle until it was time to change the micro plastic filter over again.  This requires me to climb into the sail locker and while the conditions had eased a little by then it did require a lot of holding on to get the job done.

I climbed on deck at sunset to take stock and saw a few beauties of waves coming through that looked to be close to eight metres in height at times but again Climate Action Now was handling it all quite well.  The skies were still mostly clear, with an array of fair-weather cumulus and some localized squalls in the distance. After watching the conditions for a time and taking a look around the decks everything seemed in order, so I went back below.

We have been surfing a lot of these waves and making a great run of it with the boat speed, so I decided to take a look at the trip counted on the B & G display.  I was amazed to see a new boat record had been set. Sometime in the last 24 hours we had surfed a wave at 29.4 knots.  The most I have ever seen crewed or solo on Climate Action Now was 27.5 knots, so 29.4 knots is an impressive leap in the record. Amazing to think that I likely slept right through it. Maybe I am just getting so use to going fast…

The swell is forecast to peak tomorrow afternoon at around six metres on average so that can bring peak waves of 10 metres-plus coming through. But the winds are mostly 25 knots and the waves are not throwing over and breaking, so it shouldn’t be too much of a problem. The winds are due to ease a little further tomorrow so some sail changes will be needed then.  For now it is still blowing in from the w or SW direction and when I reach close to 49 South line then I will be gybing and going on a SE course again.

And so apart from the excitement of the large swell there isn’t too much to report, so I would like to take a moment to thank todays degree sponsor.

164 West – d’Albora Marinas Horizon Shores Gold Coast QLD –  Thank you to d’Albora Marinas for your ongoing support and commitment to ocean health.  This marina has a great and very large dry storage facility giving you easy access to the Gold Coast waterways.