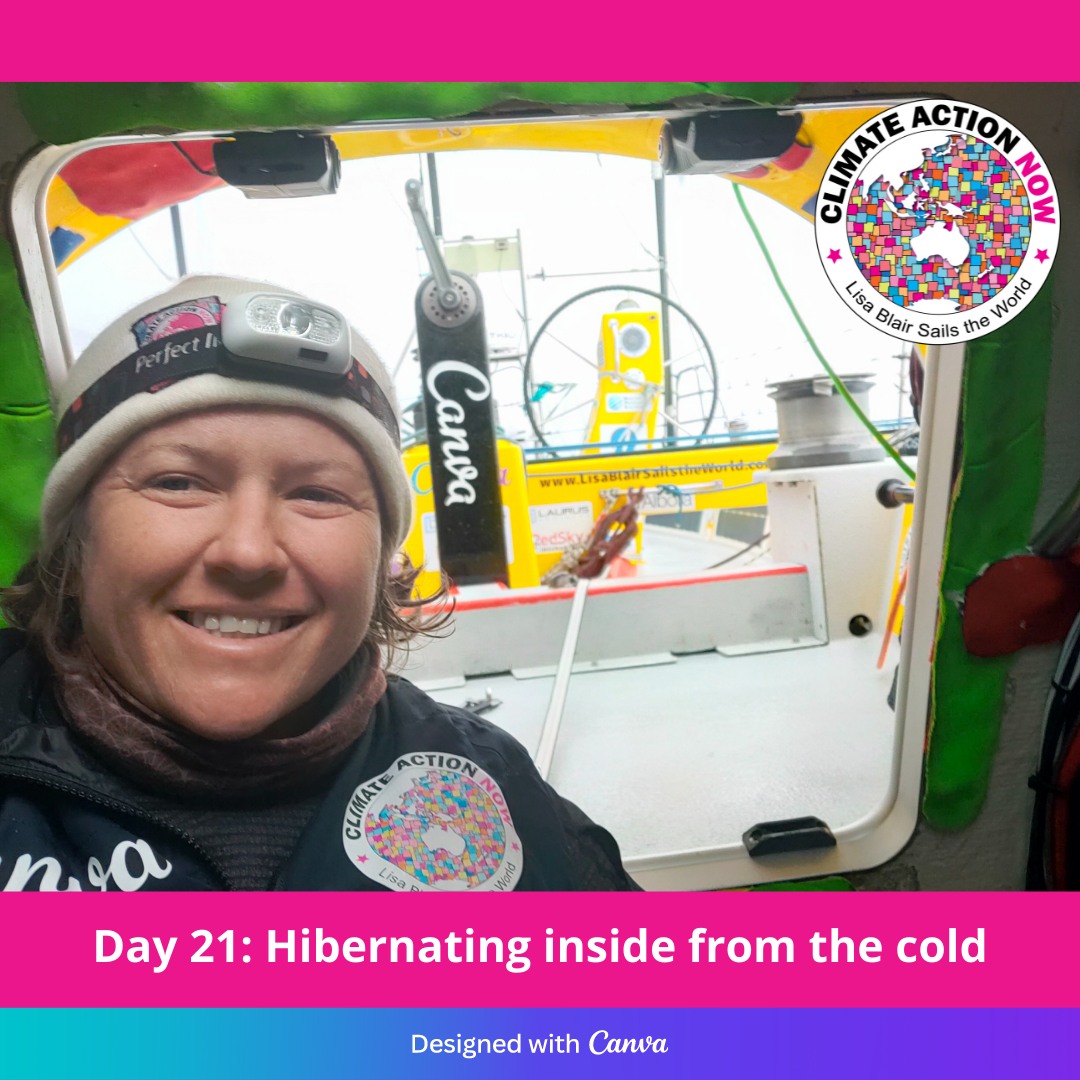 In her latest blog post, Blair attempts to catch up on sleep and Climate Action Now experiences multiple knockdowns.

With all the time zone changes and the sleepless nights my body clock completely out of sorts so I didn’t end up going to bed until nearly 4am yesterday on the local time zone and didn’t surface until lunchtime.

The conditions were quite rough through the night with poor Climate Action Now getting regular knock downs from the waves.  This is where a wave strikes the beam or middle of the boat or back corner with enough force to literally knock you on your side… As I am sailing and moving forward when this happens the whole boat lays over, the boom goes in the water and all the boats alarms go off to tell me that I am off course, and that the maximum rudder has been reached.

It all looks very dramatic with the noise and all the water rushing over the decks but apart from being a nuisance it’s not the end of the world, at least with my boat as I know how strong we made her. Any weakness in the hull was corrected with the support of ATL composites and Wright Marine so while its uncomfortable it’s not too dangerous yet.

The danger occurs when you are getting knock downs that are aggressive enough to knock you down and keep on rolling you over and that very quickly becomes a bad day at sea. The conditions last night were more of the love tap variety.  But almost every time I was about to fall asleep the alarms would trip, and we would be laid over on our side and I would be dangling in the lee cloth in my bunk.

On ocean going yachts we have something called lee cloths.  These are built into the bunks and are basically a wall of fabric that you tie up. Its sole purpose is to keep you in your bed when things like these knock downs occur.  I have been using mine every day at sea.

Needless to say, I woke feeling just as tired as when I went to bed and decided to try and get a few more hours of sleep in.  Sleep remained elusive so I eventually got up for lunch. The winds were still blowing in at 25-30 knots but there is a marked difference from last night’s conditions.

The sea state felt a little calmer, the gusts were peaking at 30 knots instead of 37 knots and in the lulls the winds were dropping right out to 20 knots. I was expecting the winds to ease a touch and again a little more through the night, but not quite yet. I decided to wait and watch the weather for an hour and monitor the situation.

Conditions like this can be very frustrating because I am set with three reefs (a reef is shorting the sail by tying it down at measured points) in the main sail and the storm jib (a special reinforced head sail for the stronger storm winds) which is perfect for the higher range of the winds. But when the lulls occur I am going frustratingly slow and I get so tempted every time to increase the sails but I have to employ my cup of tea rule.

When conditions are unstable like this, I wait the time it would take to boil the kettle, brew a cup of tea and drink the tea and if I haven’t seen anything alarming in that time period than it is usually a safe option to increase my sail area.  So, I waited my allocated 30 mins for my cup of tea rule and just as I was thinking about going on deck to increase the sail area I got a gust of 30 knots and needed to wait a little longer.

I went and did the micro plastic sample change over and made a snack, all the while watching the winds. Finally at sunset I went on deck and shook out the reef three to reef two and increased my sail area. I also decided to add half of the jib sail out to fly on the bow alongside the storm jib.  When the job was done, I set about making a freeze-dried meal. Feeling a little flat I decided that I needed a protein packed dinner, so I heated up the scrambled tofu meal option. I also added a mini can of black beans to it and then made breakfast burrito’s out of it with some melted cheese and felt a whole lot better for the hot meal.

The winds are still holding from the NW but I am expecting them to ‘back’ (move anticlockwise) to the WSW and then ‘veer’ (move clockwise) early tomorrow morning along with a little lull, so there are some gybes in my near future.

The winds are now back up to the 25-30 knot range, so I ducked up on deck a second ago and furled away the half jib that I had put out earlier today.  I am also still climbing NE as we try to position the boat to be above the worst of the swell coming through from the passing storm in two days’ time.  Bob (metbob) tells me that its currently forecast to produce eight-metre seas as high as 55 South, so we are pushing north to get above all of that.

A five-story building as a wave really is no joke and the period and information of that wave really changes the viability of going through those conditions or not. A short period or space between the waves generally indicates that they are close together, so they are forming a steeper wave.  This storm is generating a swell with a period of 10 seconds.  So, 10 seconds between the peaks of the waves.  Last time I was down here we were getting periods of 15-18 seconds at the same size meaning the wave is fatter and more rolling and a whole lot less aggressive.  So north it is for now.

So without further ado I would like to take the opportunity to thank the following degree sponsors.

177 West – d’Albora Marinas – Pier 35 Port Melbourne VIC – Thank you as always for being an incredible partner for this project.  d’Alboras jumped on when they heard I was struggling with funds for this project and sponsored a full 30 degrees of my record to help me facilitate the science and deliver the project safely so a huge round of applause to them.

175 West – North Manly Physiotherapy – Thank you to Sarah Ross for your support.  Sarah chose this longitude because it marks the beginning of the Ross Ice Shelf in Antarctica.  Thanks Sarah

And that’s it from me for tonight so goodnight all.