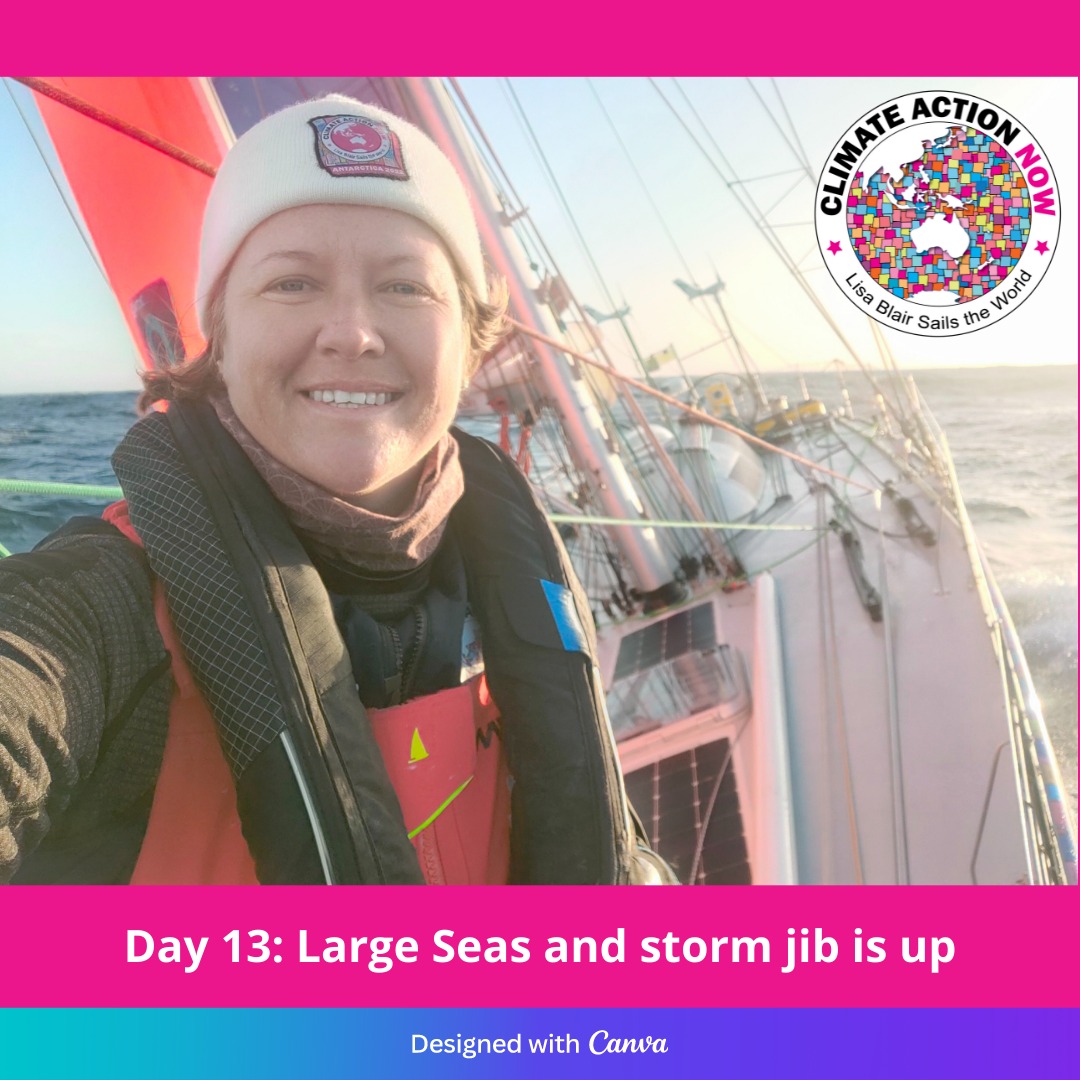 Just under two weeks ago, on Monday February 21, Australian sailor Lisa Blair set sail from Albany, WA in a second attempt to sail solo, non-stop, around Antarctica in record time aboard her yacht ‘Climate Action Now’.

In her latest blog post, Blair struggles to decide on how much sail area to have up in the oscillating wind conditions. On a positive note, she has successfully deployed the first weather drifter buoy on behalf of the Bureau of Meteorology.

Well I was really hoping for some sleep last night, but the weather gods had other ideas. If it wasn’t the radar alarm going off, then it was a particularly large wave side swiping us or it was the fact that I was getting really shifty squally weather, so the winds were going from 13 knots to 33 knots at any time making it really hard to choose a sail plan.

Squalls are these little baby storm cells that will give you a jump in the winds to 30 knots for about 30 minutes before moving off and you are back to light winds again. So just before sunset I assessed the conditions and at that time the winds were mostly peaking at 27 knots and so I was still able to hold the full mainsail and the smaller of my two jibs the J2 through those conditions, so I kept them for the night. I assumed that I may need to reef or shorten my sail area at some point through the night.

The swell is also building, and the forecast was saying three to four meters but there were some extra-large ones coming through so with the full mainsail up it made for some perfect surfing conditions and given that I am still behind Fedor I decided to push it a little. It’s a fine line between racing and surviving out here but Climate Action Now was feeling good in the conditions and I was able to hold the full mainsail up all night regularly giving me speeds of 10-12 knots, eating away at Fedors lead.

But the downside of this was that for every gust over 27 knots we were getting overpowered and rounding up (the bow of the boat rounding up towards the wind) So this morning I woke up feeling a little lacklustre and before I could even get out of bed we were hit with a large squall that was giving me steady 30-35 knots of wind.  I wasn’t too worried at first but after a few minutes I realised I would need to drop those reefs in the sail now.

I got geared up and as I was putting on my Musto Salopettes MPX we were overpowered by the wind on a 35 knot gust and pinned on our side, I scrambled out the hatch after clipping on to the boat and instead of putting just one reef in the mainsail I opted to put two in right away, the forecast was for building winds today so I figured I would get a jump on it.

It took a while to lower the mainsail and ‘tie’ it down with the reefing lines but finally everything was set and ship shape again and what a difference this made to the comfort of the boat.  I was no longer getting tossed from side to side in the pitching swell and Climate Action Now felt comfortable, if a little slower with boat speeds around the 8-9 knots now.

I also noticed that at some time in the night we must have rolled on our side so far that the boom was dragged in the water, normally this isn’t too much of an issue as I have learnt to leave a little slack in the preventer line in these conditions so I don’t break something but yesterday the conditions were calm so I had the preventer line tight and now I was paying for it.

The preventer line is a line that is attached to the back of the boom and runs all the way to the bow of the boat where it passes through a turning block before returning to the clutch bank in the cockpit. This morning I noticed that the block that the rope runs through on the bow was completely missing and was likely shattered on a knockdown.  I mentally added it to my jobs list for today and went below for some porridge.

It was cold on deck this morning and I almost couldn’t move my hands when I returned below so having the stove going was wonderful to warm up next too. After some food and my normal chores like sending my shore team a position update and filling in the log and the sleep study journal etc I returned to the deck.

I have just sailed over the 2000 nm line for this trip so there is roughly another 14000 left to sail  It also marks the day that I am to deploy the first weather drifter buoy on behalf of the Bureau of Meteorology.  These buoys take air pressure and surface temperature readings and ping these back via a satellite connection to a data base where it is used to assist in greater weather forecasting. As the buoys drift, they can also work out the ocean currents.

They each weigh around 37 kg so for one person can be difficult to manage. I have eight on board stowed in my Lazarette compartment that I will be deploying as I progress around Antarctica. It was quite the mission to get it out of the locker in the pitching rolling swell, but I finally managed and was able to complete a successful deployment.

After that I replaced the broken block, topped up my fuel tank and just when I was about to go below, who should I see but another set three dolphins having the time of their life riding the bow of Climate Action Now and jumping out of the five metre waves that were around. Just as the sunset I finally made it below to thaw out from the cold.  Currently as I write this the air temperature on deck is a brisk six degrees Celsius.

In the end it was quite a busy day. I am very ready for some shut eye but before I do, I would like to take a moment to thank the following degree sponsors for their support: