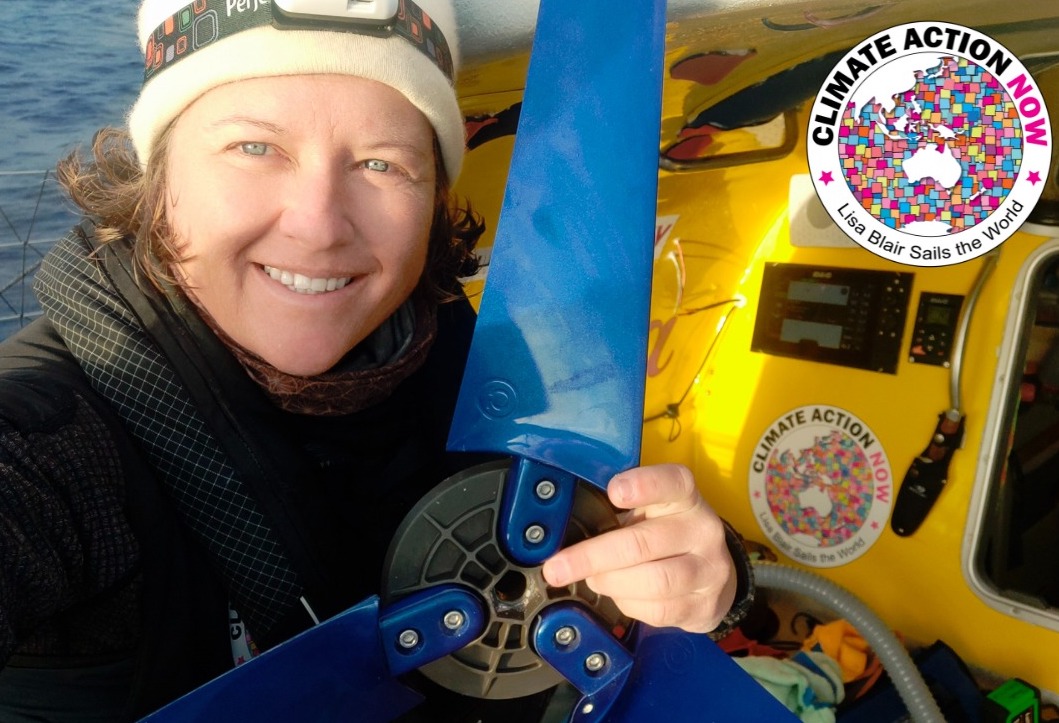 In her latest blog post, Blair catches up on some well-deserved sleep and starts on some small but important tasks around the boat.

Well today I have been a very busy little bee, getting loads of jobs done around the boat.  I ended up shaking out to the first reef in the mainsail just before I went to bed, and I unfurled the No 2 Headsail on the bow as the winds had eased right off to 22 knots and I hadn’t seen anything over 25 knots in a while. I finally got to bed around 4am. I woke at 7am to check on things and again at 10am before finally getting up at 12 noon. I was hoping to wake up a bit earlier to get on with these jobs on my list but I was still feeling rather tired, so I took the extra time.

When I finally surfaced I had absolutely no pep in my step, I felt like I was closer to a walking zombie than anything else, but the sun was trying to make an appearance and the winds had now dropped off to 10-15 knots, so I needed to drag myself on deck and change the sails. I thought that I would do the sail change and then look at the possibility of another sleep. The winds were due to remain light into the night and I knew I would be able to keep getting jobs done after dark but it is just so much easier to be able to see everything and it would be nice to be on deck and not get soaked for a change.

I shook out the mainsail to the full main and then changed over the headsails so that I had my larger No 1 jib out on the bow and our speed shot up to 9 knots in the 12 knot WSW Winds. I still wasn’t feeling any better, so I ended up going below and while I made breakfast, I decided to also have a Fizz Stick. These are made from a company called Arbonne and have only natural ingredients. It is a great replacement for coffee when I am not drinking any, as you don’t get the crash or the jitters from it. Thirty minutes later and I was fuelled up and had a great pep in my step, so I decided to start tackling some of these jobs on my list.

The first one is the reefing lines. Where they are tied to the boom have been not quite in the right place. I can still reef the sail (shorten it by lowering the main sail a little and tying it off with the reefing line) but it was a struggle to get the boom to raise enough to meet each reefing point as the angle wasn’t quite right. The benefit of getting this right means that the boom goes in the water less as it would be on a slightly sharper angle.

It wasn’t a big job, but it was one that I have been putting off until I had calm enough conditions to winch the boom to the centre of the boat and work on it.  It was a little bit of a struggle, as we still have a four-metre swell around, so even though the winds are light poor Climate Action Now was rolling all around the place making it hard to balance and tie lines etc.

I finally got that job sorted. The next one on my list was the wind generator blades, I am carrying three spare sets of wind gen blades and I now have two broken wind generators, so, with effort and great care I was able to take the nose cone off and unscrew the blades from the unit.  The risk is that there is a nut in the centre that attaches the whole thing together and it isn’t captive, meaning that if I wasn’t careful it could go for a very long swim in the 5000m deep water I was sailing over at the time.

I managed to get the starboard side blades down first and got to work replacing these, it is quite a simple task as it is just a bunch of nuts and bolts to undo, change out the new blade and then tighten. The trick here is that the tips of each blade need to be the same distance apart.

This was really hard to get right as the boat would lurch right as I was trying to measure or tighten up a bolt and mess it all up again but after an hour I had it finished and re-installed on the wind generator before completing the port side unit.  This is the one where I actually snapped the blade all the way off, the other two blades were also cracked.

So now I had two jobs down and the next on the list was to get the water out of the aft void compartment and rudder compartment before looking at the repair for the lazarette bilge pump. I was surprised when I investigated the aft void. This is a compartment at the very back of the boat that is left empty as a collision void and is simply there so that the rudder compartment isn’t too large. I did store my rubbish in it on the last Antarctica record but with all the movement in a storm the rubbish pulled a hose off and flooded the compartment.

I now just keep it empty.  Its roughly 1m x 1m x 4 m and can hold lots of water. I was expecting when I checked it today that there would be some water. Hatches leak and I have some electrical cables running through the deck into this compartment that are almost impossible to seal, but I didn’t expect about 12 buckets of water to be in there. This is not an alarming amount and it had been a while since I had checked, but still, more than I would have liked. I mentally added more regular checks to this compartment to my list and set about bailing it out.

Then I jumped into the small hatch that sits between my helms (steering wheels) and the traveller (yellow raised rail for main sail adjustment) and proceeded to climb through an even smaller hatch, the only access point to the rudder compartment. There were about three buckets of water in here, so not too much. I was quite happy with the amount as it has also been a while since I bailed out this compartment. It means that the rudder bearing is holding well.  Most of the water is likely coming through the helm pedestals, as they are vented.

All this rough weather would have easily put that much water below. Again, I bailed it out, before taking a close look at the steering gear and found it to be fault free, at least what I could see.

The sun was fast disappearing by now so while I waited for a kettle of hot salt water to boil, I completed a deck walk around and I have to say, these walk-arounds and deck checks are so important to the safety of the boat, especially before a storm. Basically, I walk around the boat slowly and check everything, making sure that there are no loose shackles, no screws coming undone or any chafe on the halyards. I then check over the parts of the rigging that I can reach and make sure that there are no broken strands or noticeable movement.

Normally, I won’t find anything, but sometimes I do. Today I found a tiny shackle that is part of the jib car adjustment system had come all the way undone. The rope that was tied to it was the only thing stopping it from coming apart all together. It would not have made it through the storm if I had missed it.

After that it was the bilge pump repair in the lazerette. If you remember I have that black flexible bilge hose, and this is now the second time it has broken. After a closer look it was a simple case of cutting the broken bit off and re attach.  I was worried that it would break again so I ended up shorting the hose so that there was no bends in it all. In theory, this would put no pressure on the plastic of the hose. Normally this type of hose is great, but I don’t think it does very well with the cold climate and has become brittle, something else that I will need to check regularly.

I then gybed to port tack, and I am now sailing along 070 T to get above the worst of this incoming storm.  I am not going to go around it as I would need to travel too far, instead I am basically going through it, just not the very worst section. Wednesday is going to be lively.

After all of that I was too tired to carry on and it was now 9pm at night so the very last two jobs, empty bilges in main cabin and sail locker and check heads bilge pump ended up being left for tomorrow.  The winds will be building back up again, but the swell is set to ease a little more.  I should have no problems tackling those few jobs then. I also am aiming to have a shower or bucket bath before it gets rough again and the temperature drops – fingers crossed.

So I have now had a hot freeze dried meal, completed my micro plastic sample changes and I am so ready for bed, the winds have built a little in the late evening and are now gusting up to 23 knots so I have changed over the jibs again and I am trying to hold onto the full mainsail a little longer. The wind seems to be coming in cycles, building to 25 knots, then falling back to 18 knots. I am right on the edge of needing to put in the first reef in the mainsail, but if I do this, I will be going too slow in the lulls for my liking.

Ah the joys of ocean sailing.  There are unfortunately no degree sponsors tonight however I really encourage you, if you are interested in supporting this project, please do take a look at the value you get by becoming a tax-deductible degree sponsor and I really appreciate all the outpouring of support I have been getting.  Thank you everyone.

And so my bunk calls to me so I will sign off, goodnight.