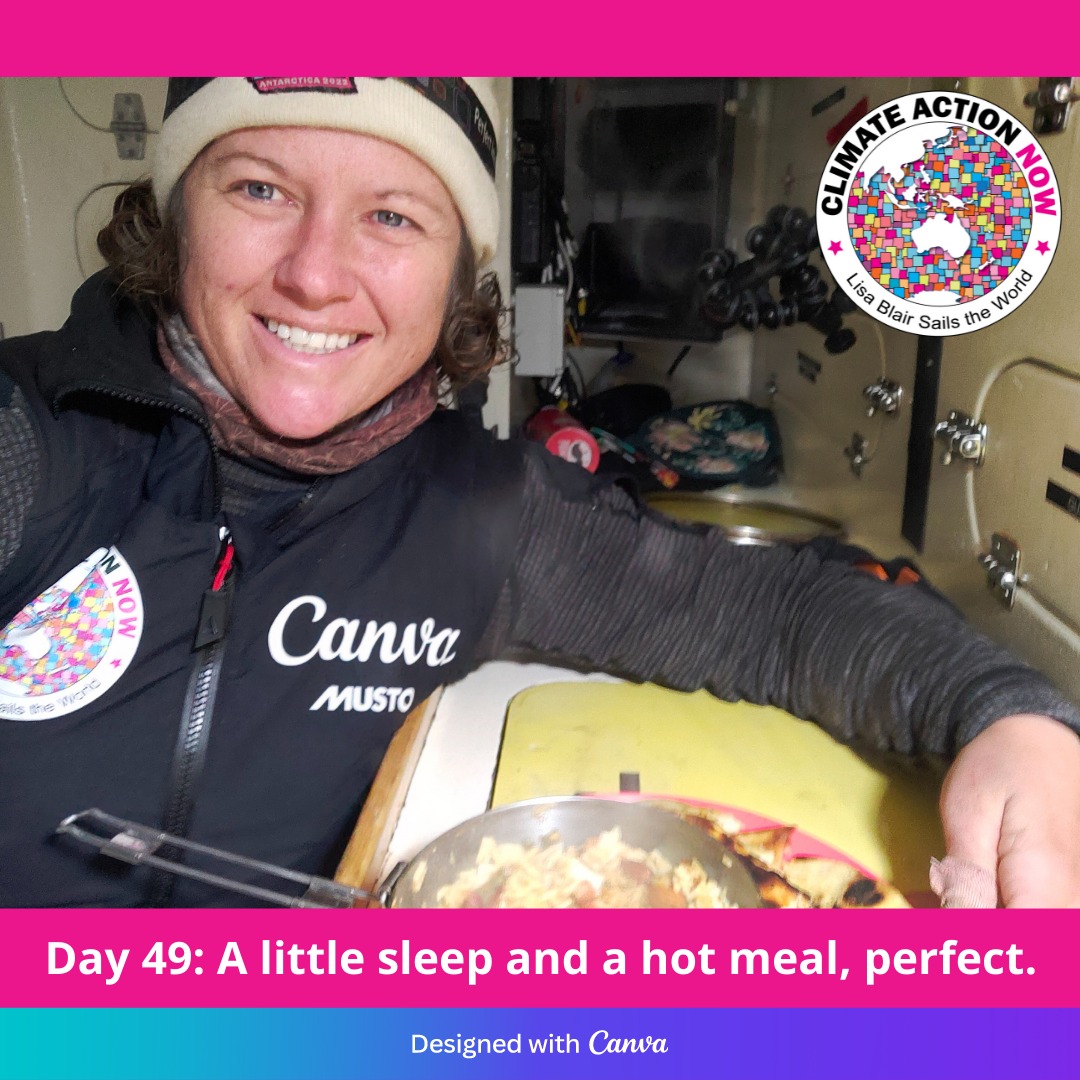 In her latest blog post, Blair was contemplating whether to reef or not, and when to do so, but left it too late…

For the live tracker, see: https://lisablairsailstheworld.com/tracker

Well, when I woke up, we were making some great speeds with the winds at 20 knots and gusting to 25 knots and I still had the full mainsail up, but I was sailing with the No 2 jib up.

I set about making some breakfast and while I had managed about 8 hours in bed, I still felt very tired. I think it was just the collection of no sleep over the past days that was getting to me. I had forgone sleep multiple times to do those repair jobs, so I knew that today was going to be a day of rest.

I needed to try to catch up a little bit before my next storm arrives on Monday, so after breakfast, I went back to bed for another two hours. It felt like it made all the difference.

Winds were mostly above 25 knots now, so I went on deck and put the first reef in the mainsail. We were still sailing on starboard, but I knew that there was going to be a gybe in my near future, so I was just watching the instruments in the navigation station as the winds went from south-west to west-south/west to the west.

Eventually, just after sunset, the winds went to the west-north/west and it was time to gybe. It was still blowing in at 25 knots on average, but now I was getting the odd gust at 30 knots and I was contemplating putting in the second reef, but as usual I was in that in-decisive stage.

I wasn’t entirely sure if the winds were going to hold that high, or if this was a temporary state, so I made the decision to gybe the boat first on a lull and then worry about if I needed to reef or not.

It was the wrong choice, because as I was setting up for the gybe and centering the traveller and starting to winch in on my mainsail, the winds became more 30 knots than less. I knew that it was going to make for a difficult gybe.

When we gybe, the back of the boat passes through the wind and the mainsail can become a bit like a lever. When the wind is filling the sail, it remains pushed out to one side, but as we change direction and the winds move to the other side, it can fling the boom across in a dramatic fashion.

If you don’t have the mainsheet in tight enough, this secured the boom in the centre of the boat and flattens the sail out to reduce this flinging or leverage effect, then you can get a rather large shock load.

With the winds being higher, it was a lot more difficult to winch the sail in that far and to get it flat enough to take the impact out of the gybe, but I managed to just get it in. The seas were now a messy 3-4 metres and just as I was getting ready to gybe, we were shoved by a little wave up into the wind, so Climate Action Now rounded up. Bugger.

Not normally a problem, I would usually just ease the mainsail out and we would bare away from the wind and back on course, however, I had just been winching for over 20 minutes to get the boom in that far and my muscles were feeling it. I really did not want to have to do that again.

I hoped that in a lull we would get enough purchase to bare away back to course again. As we were pinned to windward, the boat was healed right over and at one point, we had a wave break across the lower section. Me being me, had gone on deck in just my http://Musto base layers, my mid layer jacket and http://Dubarry boots. I was standing on the lower section of the cockpit at the same time all that water came over.

Because I really didn’t wish to get wet, I managed to jump up and hug my body around the pedestal grinder and just managed to keep clear of all that water. I relocated to the high side of the deck directly after, but we were healed over so far, I needed to wrap myself around one of the windward winches to stay there.

After about 10 minutes of this, the winds finally managed to ease enough for us to bare away and I was finally able to gybe. As soon as the gybe was complete, the winds were right back up at 30 knots and I started to see 32 knots coming through on those gusts, so I really needed to put the second reef in now.

On reflection, I really should have done it before I gybed as it would have made life so much easier. I shortened the sail and ended up furling away the No 2 jib, so I am now sailing on the second reef in the mainsail and the storm jib again. After all the lines were tidied up, I finally went below and got warm again.

I made some noodles for dinner and finally by 11.30pm I was climbing into my bunk to get some sleep. Winds were holding steady at 25-30 knots and so I just left Climate Action Now to sail. I really needed to catch up on some sleep, as I can feel that I am running on empty still.

You can feel it in things like sail changes. My muscles get fatigued earlier and I have developed a little cough again. I am not sick, but I do tend to get a barking dry cough when I get heavily fatigued. It used to turn into tonsillitis, but I had my tonsils out in Singapore when I was racing around the world in the Clipper Race. Now when I get this worn out, I just get a barking cough and a sore throat, so I went to bed.

Rest is going to be my primary focus for the next few days as I have a good enough lead on Fedor’s (Konyukhov) time to take it. I only managed one hour of sleep before I needed to change over the micro plastic samples before getting a blissful five hours of sleep. It is just after 8am here now, so I am doing all my deck checks and monitoring the winds before I plan to get another little sleep in.

So for now, we are humming along in 30 knots of wind and making some great speeds. I am going to sign off but before I go, I would like to take a moment to thank the following amazing degree sponsor.

Airlie Beach, Queensland – Thank you again d’Albora Marinas for your fantastic support of my record. D’Alboras has 10 premium marinas across Australia and all of them are wonderful.

And so now I am off to bed again.