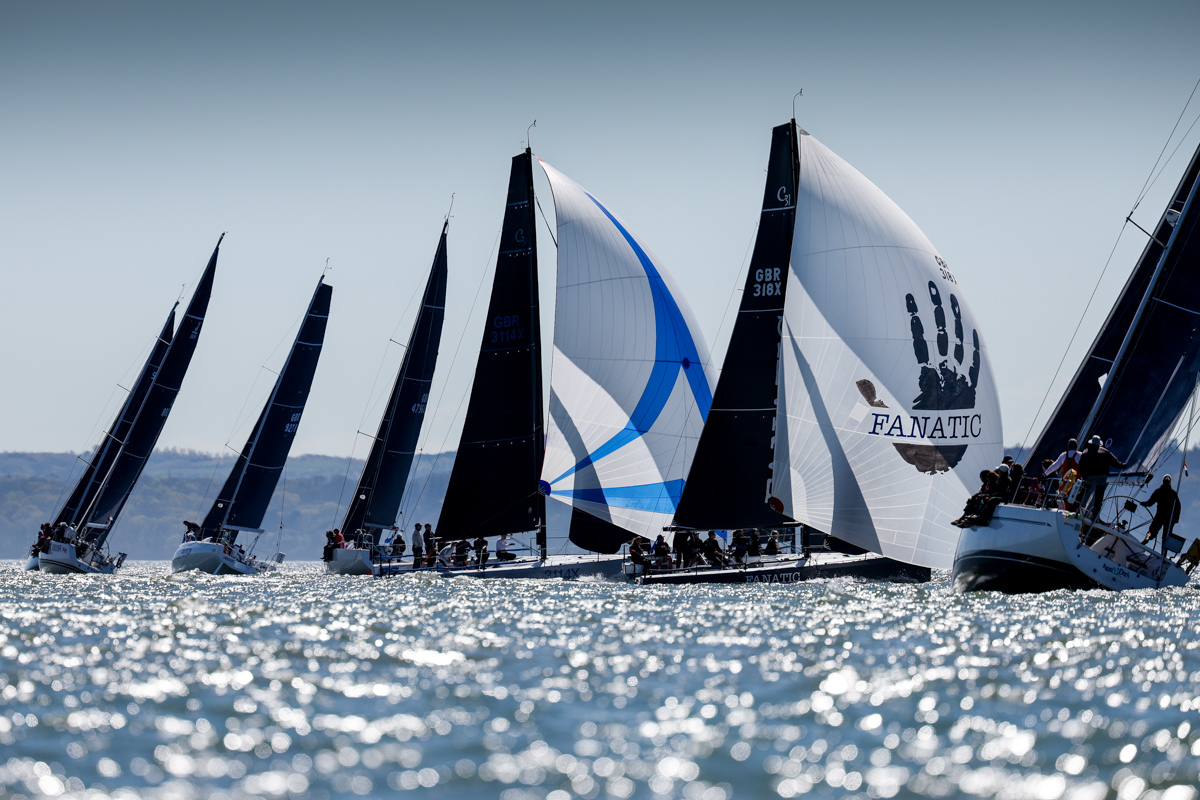 Cowes: The first day of the RORC Easter Challenge was blessed with sparkling conditions in the Solent, with a light gradient breeze from the south east building during the day to over 10 knots of pressure, while brilliant sunshine throughout the day added to the superb conditions.

The coaching team out on the water giving competitors top advice included North Sails and a RORC team run by Australian, Andrew ‘Dog’ Palfrey. After racing, competitors enjoyed a free bowl of pasta and a beer before the well-attended coaching debrief at the RORC Cowes clubhouse.

“The coaching team have one overall goal and that is to help all the teams progress at an early stage in the season. Wind strength was better than expected, not especially shifty, but wind speed did vary,” North Sails’ Jeremy Smart commented.

“In puffy conditions, anticipating the change becomes very important and we saw quite a few teams not foreseeing the change in gear, so that is definitely an area for them to work on.”

IRC One
Ian Atkin’s GP42 Dark ‘n Stormy got her 2022 campaign off to a perfect start, taking three bullets, but it was far from easy. The Dutch Ker 46, Van Uden, skippered by Gerd-Jan Poortman finished the day in second place. She is just a point ahead of her Dutch rival, the Ker 43, Baraka Gp, skippered by Harmen Jan de Graaf.

“That was just a blast, a small class but there were no idiots out there,” explained Ian Atkins, who was taking part in his first regatta with his new boat.

“The young team on Van Uden were a real handful, especially off the start line, but I think we had just a bit more acceleration in the corners. It was just fantastic to be out racing again, it was such a brilliant day.”

Ker 46 Van Uden is a young development squad with high hopes of reaching the highest level of keelboat racing. “For us the big thing is that we are finally racing against comparable boats,” Van Uden’s mid-bow, Bouwe van Der Weiden, commented.

“We can see big changes we have to make, but also the small changes that really make the difference. It was only our first day and we have the potential to get some good results at this regatta.”

IRC Two
The largest class in the regatta also produced the closest racing. Team Knight Build on J/112 Happy Daize is skippered by James Chalmers. Happy Daize finished the day in pole position for the class by a single point.

Dave Bartholomew’s Cape 31 Tokoloshe 4 was third in class after winning the final race and was the top Cape 31 for the day. VME Racing’s Mills 39 Zero II had cause for celebration, winning Race 2 by just two seconds after IRC time correction.

“Most of the team have been racing together for about 10 years and after the disruptions of the past two seasons, it was so much fun to get out racing again,” said Oliver Love, whose team was spotted dancing to the starting area playing tunes through their deck speakers.

One of the Frank 3 crew, now dubbed ‘Shoeless Joe’, lost his footwear in a gybe and will be spending the remainder of the regatta in sea boots!

After the first RORC Easter Challenge debrief, lead coach Andrew ‘Dog’ Palfrey commented: “What a wonderful attendance at the RORC! Thanks, and we hope you got something from the debrief. Overall, a great start for day one of the season in fabulous conditions.”

The RORC Cowes Clubhouse was full of smiling sailors relishing the prospect of similar glamourous conditions for the second day of the RORC Easter Regatta.