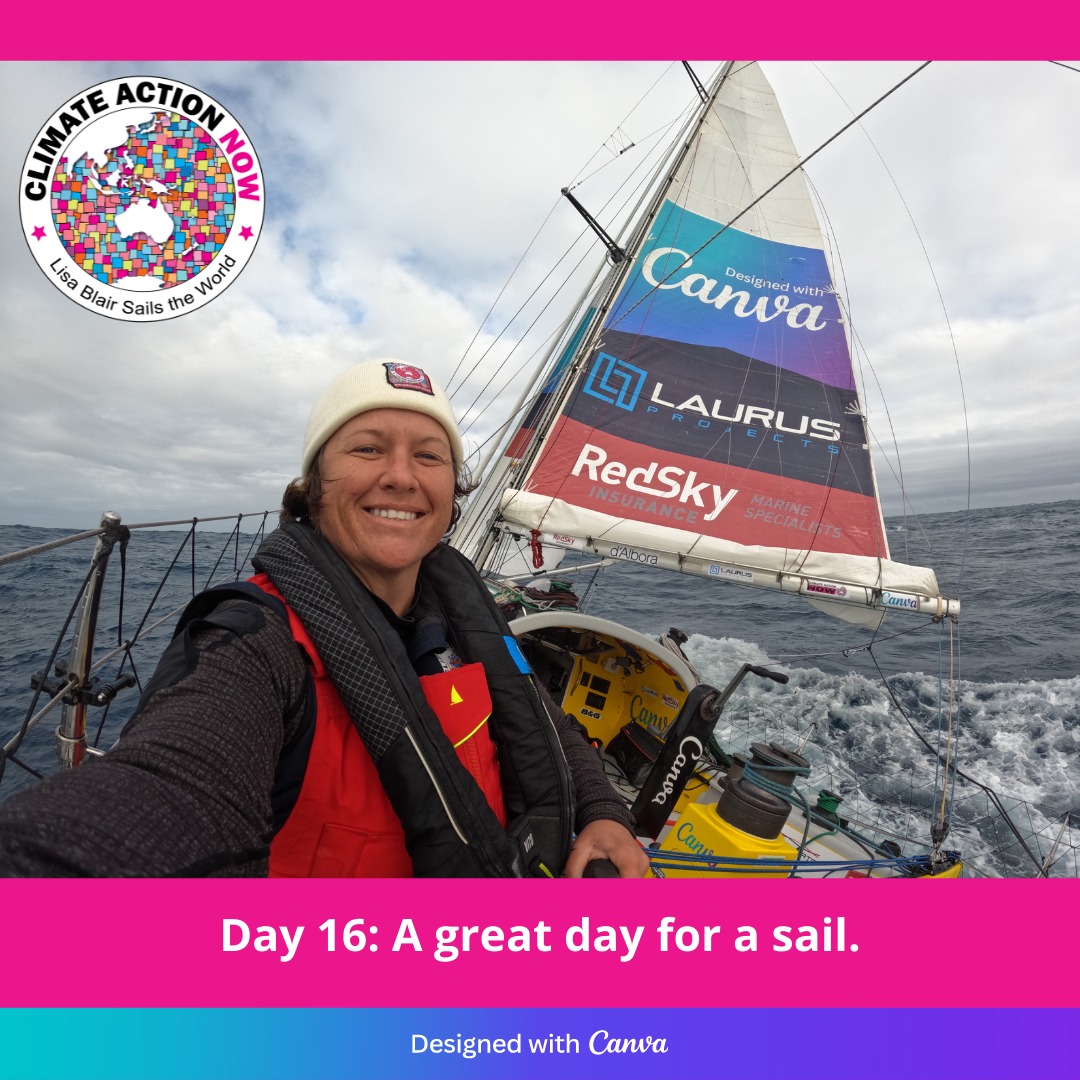 Well it’s in some ways been a busy day and in others not a whole lot has happened.  I didn’t get to bed until late as usual and then I needed to be awake to avoid entering the 20 nm exclusion zone around Macquarie Island.  The winds were initially WSW so I was able to clear the island but as the winds moved around towards the NW I unfortunately needed to get out of my hot bed (again!) and put in a gybe in the wee hours of this morning.  But I had cleared Macquarie Island by late morning and started taking a closer look at the weather.

I was undecided if I should gybe back and stick to Bob (metbobs) original forecast, or if I should hold on to the port tack that I was currently sailing and just keep sailing east. (A port tack is when the winds are coming over the port side making the boat heal to starboard.

After a little more investigation I decided that I would lose too much ground to gybe back and end up getting caught by this incoming lull that will hit tomorrow night.  It covers a small area but it is exactly where I am going to be. We have been trying to get into a position where I can avoid it. The latest forecast that I could see still showed the lull catching me if I gybed down so I made the call to just get as far east as I can in the time available to me.

I could also see that most of my nasty squalls (localized storms) that have been hitting us for the last 24 hours seem to have dried up and the winds have been consistently below 25 knots with only one gust at 27 knots for the last 3 hours.  So, in the interest of outpacing this lull of no wind I went on deck to change the sails over.

I was still sailing with the third reef in the mainsail and the storm jib.  I was looking to get out the no 2 jib and winch the main sail up so it was at the first reef. With this combination I should see a marked improvement in my speed without being too overpowered if another squall hits us. I have the storm jib sheets run through the normal J2 headsail blocks so I needed to re-run this so that I could use that sail and also remove the extra lashings that I had added to the furled sails on the bow to prevent them coming undone in the storm.

All of this ended up taking a couple of hours and when I was done it was time, once again to change over the micro plastic samples.  My goal now is speed speed speed as I try to get ahead of this lull but also to get some distance against Fedors boat from 2008.  I am now ahead of him but not by much. Out here anything can happen, so I am hoping to get several days ahead to have some room up my sleeve as a just-in case scenario.

Tonight for the video update I decided to post a few short clips from the last storm.  You can see me shorting the main sheet as I winch in the mainsail and undoing the preventer line.  I was getting ready to put Climate Action Now in to hove to position.  I wanted to give you all a little sense of what it is like to be on deck in those conditions. Remember the temperature of the sea is currently 10 C.

This afternoon/evening I was able to have my first zoom interview from sea where I spoke with Elyce from GWN7 in Albany.  It will be broadcasted locally in tomorrow nights news but I believe there will be a clip we can post to my socials so I will keep you all updated.  It was kind of nice to have a chat with someone and have it almost feel like we were in person.

So that’s it for me, but I want to thank tonight’s degree sponsors because they are awesome.

So thank you to: