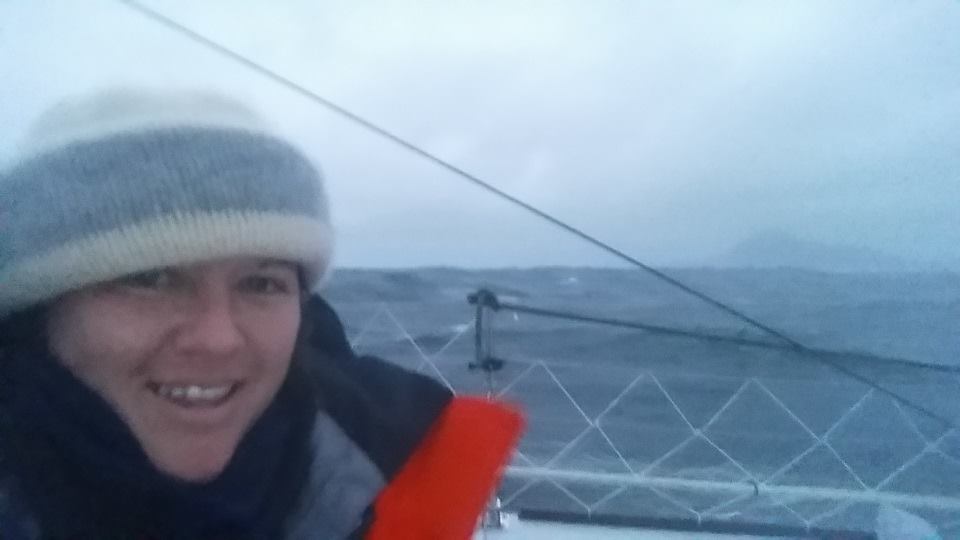 Lisa Blair with Cape Horn in the background.

Lisa Blair is attempting to become the first woman to circumnavigate Antarctica. Last night she passed her first major milestone – Cape Horn – and is currently 49% of the way through her journey. After passing the Horn she sailed north-east to get some shelter from a storm that is following her.

Lisa has sailed around the world on a Clipper yacht, crossed the Tasman twice single-handed and skippered her boat in the Rolex Sydney Hobart but this was her first rounding of the solo sailor's Everest. Here she tells us the story leading up to the landmark crossing. We will add her description of the Cape Horn moment when she files her blog later today.

Or should I say Morning All, as its currently 4am here.  I have had an absolutely massive day.  At around 3 am the winds built all the way to 35 knots so it was reef in and storm jib up.  A few short hours later and the winds were once again dropping off to 20 knots.  I knew that I had this almighty storm hot on my heals so I was really reluctant to re-hoist the main sail or to drop the storm jib and put the no 2 head sail out however my lack of progress was becoming an issue in itself.

I went on deck to shake out to the 2nd reef and got a lovely surprise.   Land Ahoy!!  I was so shocked to see it that I almost didn’t believe my eyes at first.  The sky was all grey and the light rain had reduced visibility to near nothing. I was still more than 20 nm offshore so I completely didn’t expect to see land but here was this glorious mountain range stretch over the horizon, it took me a minute but the short mountains were actually huge and were covered in snow…  Needless to say, I got very very excited and couldn’t take my eyes of the sight for quite some time.  It has been 49 days since I last spotted land and in all that time there has been nothing to break up the horizon line all around me.

If you missed it on Facebook – a short video direct from the southern ocean of my first view of land.

Once I calmed down a bit I finally shook out to the second reef and went back below.  The winds were blowing 25-30 from the NE making it difficult to make any headway.  My boat speed for the next several hours was a frustrating 3-4 knots.  With the No 2 reef in the main and the storm jib Climate Action Now just didn’t want to move.  I spent endless hours trying this or that with the trip to see if I could get some more speed out of her but nothing seemed to work.  At one point, I had unfurled a bit of the No 2 jib and left the storm jib up trying to make the boat sail like a cutter and while it gave me a bit of speed it wasn’t very much.

By 3pm the winds had dropped to 15 -20 knots and I umm and ahh for almost 2 hours on whether I should shake out to the first reef.  I just had this storm hanging over my head and if I was down below or trying to get another little sleep in when the winds hit I risked breaking my main sail.  Finally, after the winds dropped out to a steady 15 knots I shook out to the first reef.  The boat still didn’t make better speed. I was sailing more sideways than forward.  I was tired from the 2 hours of sleep that I managed last night and I was getting frustrated…

The winds kept easing until I needed to put out the No 1 head sail in 10 knots of wind.  As the winds were still from the NE I was still sailing up wind on a close reach so I left the storm jib up as well trying to save me the energy of having to drop the sail and re-hoist again in the storm.  With nothing more that I could do and an unimpressive 4 knots of boat speed I thought that I would try to get some sleep.  I was likely to be up all night on the approach of Cape Horn so I wanted to get a little more sleep than 2 hours to see me through.

Almost the moment that my head hit the pillow the winds dropped out to 5 knots and the boat's Auto Pilot alarms started going off.  Beep Beep Beep, not something that is easy to sleep though.  Gahh…  When I got on deck I noticed that the winds had backed to the NE and 10 minutes later were coming from the W, so I adjusted the sails and course to suit.  I was also now sailing down wind so by having the storm jib up I was slowing myself down.  The skies had cleared by now from the overcast drizzly rain to a very clear night with a full moon rising and the boat made extremely slow progress of 1 knot boat speed.

Over the space of the next hour the winds went from the W to the S to the E and back to the N, just one big circle causing me to gybe several times and hand steer for a portion just to keep the boat moving.  Another reason for my frustration was that I had worked so hard over the last few days to sail as fast as I could… without breaking the boat… so that I could try to get ahead of this storm and round Cape Horn just before it hit. Now I was merrily drifting along just waiting to get slammed with some wind…

As the night progressed I called home and caught up with the family.  They had all met at the local yacht club to have a Cape Horn rounding party so it was nice to get to talk to everyone and have the phone passed around.  I also had a great call from Dick Smith just calling to say well done and congratulations.  Unfortunately, the main engine was running out of gear to charge the batteries so it made it almost impossible to hear what he was saying.  My generator is playing up again and last night before bed I went to turn it on to charge the batteries ahead of this storm and while she ran for a little while it then stopped.  Another job on the list.

Anyway its now 3.30 am and I will try for some sleep in these light drifting winds, still 35 miles from Cape Horn.
Goodnight.

My Quandary – We, as a family travelled al the way to Albany to see her off, only to come home again before she had left.  Today, we as a family went to the Mooloolaba Yacht Club to celebrate the crossing of the Horn, and again we returned home before this was done.

So, what do I do about her arrival in Albany……..am I game to book the flights.