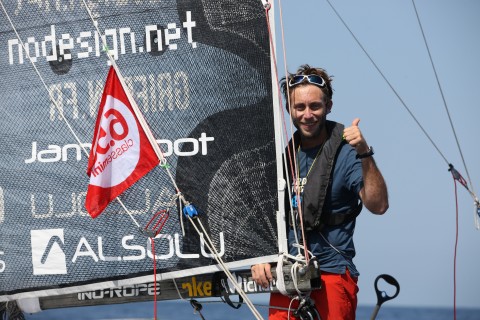 Less than twenty-four hours from the finish, Ian Lipinski looks to be heading towards an historic double. Thus far, never before has a racer won in the production boat category and then repeated his win in the prototype category two years later. Following on from Sébastien Magnen on his prototype Karen Liquid in 1997 and 1999, he is set to become the second double champion of the Mini-Transat.

They’ve got the scent of home in their nostrils now. On two converging routes, Ian Lipinski (Griffon.fr) and Jörg Riechers (Lilienthal) are rapidly making headway towards Martinique, with the pair of them set to make landfall over the course of day on Tuesday. On their heels will be Simon Koster (Eight Cube Sersa) and Andrea Fornaro (Sideral)… In a way, this foursome are a good reflection of the diversity of the applicants that sign up for Mini-Transat La Boulangère: one champion who has been able to build his victory by progressively moving up the hierarchy of the Mini circuit, one German, one Swiss and one Italian sailor, testify to the diversity of the profiles and the influence of the Mini-Transat La Boulangère across Europe… Behind these four, Keni Piperol (Région Guadeloupe) is the harbinger of a revival in the offshore racing network in the Caribbean islands and could well inspire future sailors.

Clarisse and the boys

In the production boat category, the youngest sailor in the race, Erwan Le Draoulec (Emile Henry) is continuing to keep the opposition at bay with the maturity of someone who has knocked about a bit. We can but imagine what must be going through the mind of this young man, driven by a crazy desire for victory, but also highly emotional and sensitive. Not everyone is gifted with winning the Mini-Transat at 21 years of age. Astern of him, Clarisse Crémer (TBS) is constantly discovering new pretenders to the podium. Yesterday, it was Tom Dolan (offshoresailing.fr) leading the attack for the runner-up spot. This evening, the Irish sailor has been relegated to fourth place by Tanguy Bouroullec (Kerhis Cerfrance), who has seemingly come racing back into contention from the back of beyond thanks to his southerly option, and by Benoît Sineau (Cachaça II).

Among the Pogo 2s, Frédéric Moreau (Petit Auguste et Cie) is leading the way again ahead of Mathieu Lambert (Presta Service bat) and Estelle Greck (Starfish). This trio are grouped within ten miles of one another and anything is still possible. Shadowing them are Victor Barriquand (Charente Maritime) and Guillaume Combescure (Mini Oiri). Quite the motivation for the top trio, who would surely be proud to get the better of the latest generation boats. This close-contact racing clearly isn’t a very familiar concept for Gwendal Pibot (Rossinante), isolated to the north, and Loïc Fagherazzi (Trebunnec), positioned to the south of the chasing pack. Between the two, the lateral separation is vast; 500 miles, or twice the length of the Bay of Biscay crossing.

For other sailors in the fleet, such tactical considerations are a world away. Charlotte Méry (Optigestion – Femmes de Bretagne) has clearly had a few technical issues, which have hampered her progress. She’s back on track again now making a normal speed; an indication that the young sailor has remedied the problem.

She is not alone. Similar comebacks are evident from observing the progress of Elodie Pédron (Manu Poki et les Biotechs) polled at over eight knots, Romain Bolzinger (Spicce.com) powering along at over five knots under jury rig, and Patrick Jaffré (Projet Pioneer) who seems to have found just the right balance between speed and wisdom.

However, things are rather more complicated for Vedran Kabalin (Eloa Island of Osinj), who has managed to contact Race Management to alert them to the fact that his boat has dismasted. Meantime, Dorel Nacou (Ix Blue Vamonos) is just approaching the Cape Verde Islands. An ocean apart, no big deal…