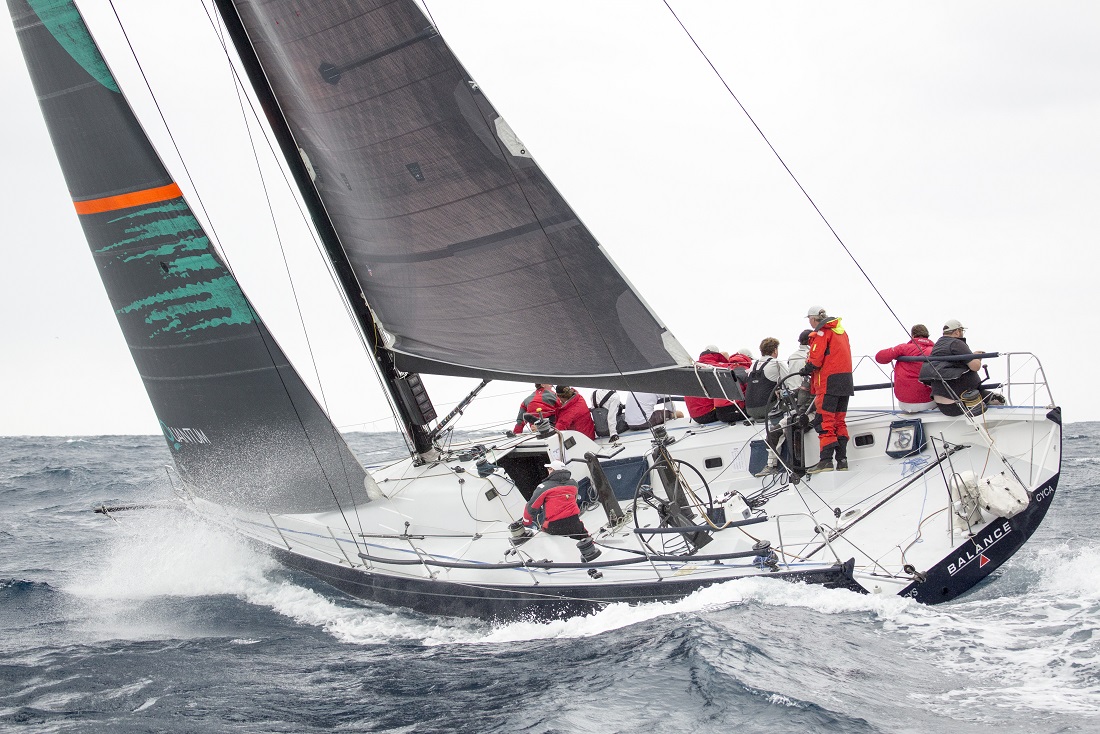 Darryl Hodgkinson has sailed his canting Cookson 50, Victoire, to a two second win over Paul Clitheroe’s Balance in the Lion Island Race, the season opener of the Cruising Yacht Club of Australia’s Ocean Pointscore Series (OPS).

Balance, a TP52, collected line honours at 14:16:22 hours, trailed by Victoire and Sam Haynes’ TP52, Celestial, which finished third overall today. The same trio also finished top three in ORCi, in the same order. It was a repeat in PHS, except Balance claimed the spoils from Victoire and Celestial.

Balance’s new rating, following recent modifications to the keel, allowed Victoire to grab the top spot. Hodgkinson was surprised and thrilled to find himself in the winner’s seat.

“I’m back – and the duel with our friends on Balance continues,” a chuffed Hodgkinson said early this evening.

However, ‘Dr Darryl’ confessed: “I am surprised, because we got off to a shaky start. We heard the horn, and thought it was the 10 minute gun, but no, we only had a couple of minutes and didn’t even have our jib up.

“The chute didn’t go up properly and I broached the boat. Celestial was above us, and so she was pushed into a broach too. Meanwhile, Balance was below us and just chugged along like a freight train. Having said that, we had a thrown together crew – only a few of my regulars,” Hodgkinson ended.

Despite these problems, Victoire made it to the Island in 90 minutes in a lovely southerly breeze, tailor made for running. She was third around the mark and settled into the beat home to the finish on Sydney Harbour.

“We started the 25 boats in a nice 20 knot southerly,” Principal Race Officer, Robyn Morton, commented. “A short time later, we had two retirements – Nine Dragons (Bob Cox’s DK46) was first with a broken spinnaker pole and then Esprit (Greg Wilkins’ Archambault 32) announced they were not continuing.“

Morton also said Aaron Rowe’s TP52, RKO, was around 15 minutes late to the start, which did affect its performance with a ninth overall. Julian Farren-Price, who won the last two years’ Lion Island races and the last five seasons OPS trophies, took an unusual back seat today, About Time ending the day in fifth overall.

Comprising eight races, the Ocean Pointscore Series continues on Saturday October 29 with the Botany Bay Race, starting from 10am on Sydney Harbour.

For full results and provisional Ocean Point Score standings log on to:  www.cyca.com.au/sysfile/downloads/2017_summer/16_17_Ocean_Pointscore/series.htm