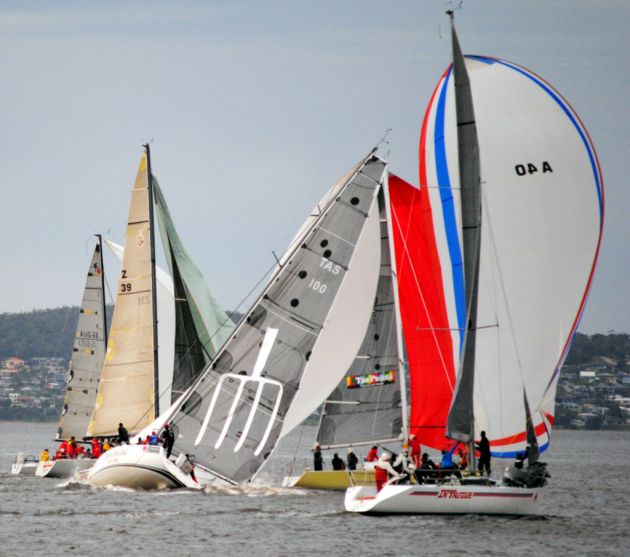 The Fork in the Road broaches soon after the start of today’s Channel Race. Photo Peter Campbell.

Galeforce northerly winds gusting to 50 knots on the River Derwent and in the D’Entrecasteaux Channel played havoc with Hobart yachts in their first long race of the season, forcing half the fleet to retire from the Channel Race.

Out of 39 starters only 19 boats completed the course, most of the retirees being forced out with sail and rigging damage.

The 19 finishers battled their way up the river into 30-40 knot headwinds with heavily reefed sails, some reduced to red storm sails more often seen in ocean races.

The 30 nautical mile Channel Race is the first of eight races in this summer’s Combined Clubs Long Distance Series.

After a fast spinnaker run down the Derwent and into the Channel to round a mark off Bligh Point, the fleet was hit by 40-50 knots before having to battle to windward up the river against winds averaging 26-32 knots, with gusts in excess of 40 knots and steep short seas.

The river was a mass of white caps, the wind whipping spume off the waves, as the last boats neared the finish. At 4.00pm a 50 knots gust was recorded at Hobart. An hour after the last boat finished the wind was gusting to 70 knots with waves breaking over Sandy Bay Road.

“We did a bit of damage…blew the leech our of the mainsail…pulled a ring out of the only small No 3 headsail we had on board, “ reported Michelle Denney, co-owner with husband Mike Denney of Wild West.

Gary Smith’s 45-footer The Fork in the Road recovered from a spectacular broach just after 10.10am start of Castray Esplanade to take line honours shortly after 2.00pm with Ian Johnston’s powerful Zephyr crossing the line 20 minutes later.

The impressive heavy weather performance by Zephyr, a powerful Farr MX42 and her crew was rewarded with first place on corrected time under both AMS and PHS categories of Group A.

Only six boats competed under an IRC rating, with Philosopher winning from Masquerade and Don Calvert’s Intrigue.

Only two boats finished the race in Groups B and C. In Group B the 12 boat fleet was cut to two finishers, Footloose (Stewart Geeves) winning from AMS and PHS from Silicon Ship (C Wyatt).