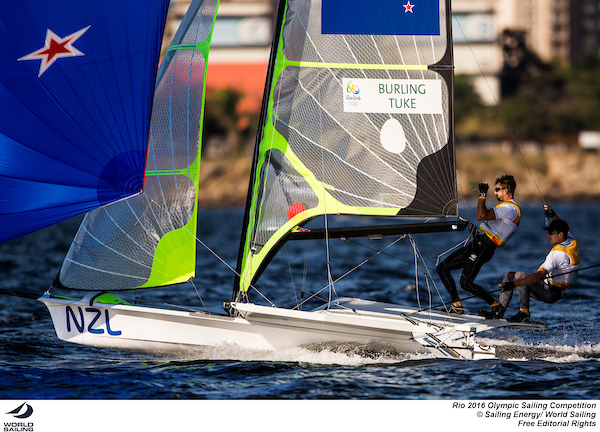 If someone told me six years ago that I would be writing about how inspiring New Zealand sailing was, I would have probably laughed out loud. But here I am, pen to paper, fingers to keys, about to explain why Kiwis are the best sailors on the planet. Before you jump to conclusions and start throwing stones banishing me forever to this side of the ditch, just read on. You will want to move here as well.

Focusing on Auckland in particular, but without discounting other locations such as Wellington, the Marlborough Sounds, Napier, Tauranga and the Bay of Islands (just to name a few), a sailor is spoilt for choice.

With a population of around 1.4 million people, I’m going to state, with almost certainty, that over half of the population sails. My statistics are far from perfect, so for arguments sake, let’s say that a massive amount of locals on the Waitemata Harbour and the Hauraki Gulf are sailors.

When Sir Peter Blake steered Steinlager 2 into Auckland during another winning leg of the Whitbread Round the World Race, New Zealand went numb. A boat full of Kiwis, young and old, were taking the world by storm. Sailors were inspired. When Sir Peter and his crew headed off for the next leg, it was standing room only on the harbour. Enrolments into local sailing schools and yacht club memberships skyrocketed. The Steinlager 2 campaign proved to this country, that anyone from any walk of life could become a hero and thus weekend warriors were born.

If you love sailing, then Auckland is mecca. Daylight savings is a massive bonus to growing fleets everywhere. You can literally race every night of the week across 38 different yacht and sailing clubs. Auckland is 1,086 km2, so that’s a sailing club every 28kms. But they don’t hibernate in winter, oh no not at all. Winter is for two-handed series, more club racing, and long haul Category One races to other parts of the south pacific.

Each July, yacht club administrations gather in one room to work on a combined calendar to ensure maximum opportunity for sailors to spread themselves from off-the-beach events on the eastern beaches, to keelboat racing in city. Working as the sailing manager at Royal Akarana Yacht Club, I get to attend these meetings, and sit through 964 confirmed sailing days. 964 sailing days during a 365-day year. Mecca.

The recent Olympic Games was another buzz provider to get more people on the water. New Zealand finished the regatta with four medals. One Gold, two Silver and a Bronze. Australia also claimed four medals, and although they just pipped NZL at the medal haul post by winning three silver, over the Kiwi two, it was clear that this tiny nation was a force to be reckoned with.

Gold medal winners Peter Burling and Blair Tuke are household names in New Zealand. They are on the same level as the likes of Richie McCaw and Sonny-Bill Williams. If they can secure the America’s Cup for Emirates Team New Zealand in 2017, then they will be upgraded to legend status alongside the great Sir Peter Blake.

The 49er sailors are also keelboat sailors, with both racing from Auckland to Fiji, and venturing north to race in the annual Bay of Islands Sailing Week. They have also been spotted on the local rum racing scene, although their rum intake is slightly less than the majority.

When the youth get to train alongside their sailing heroes, you are setting yourself up for success. Back to Royal Akarana Yacht Club, and over the last four years, the kids of RAYC rig and wash down next to Pete and Blair, as well as silver medal 49erFX sailors Alex Maloney and Molly Meech. Having these direct connections ensures the future of the sport. The only obstacle in our way is ensuring there is adequate space to store more 49ers and Nacra 17’s, because if you ask the kids, these are the boats they want to race.

But if for some reason the Olympic goals were outside their reach, or they wanted a different course to sail, there are still plenty of other options available for racing, and at an international level.

The Royal New Zealand Yacht Squadron (RNZYS) arguably has the best youth training program in the world, and they have just added foiling to the mix. Understanding that foiling is the future, RNZYS has purchased two Nacra 20’s from Emirates Team New Zealand, and with the support of members, is about to launch these boats. They are being inundated with applications to join the program. Is there any other club that has this option? No. Only in New Zealand.

Phil Robertson, Will Tiller and Stewart Dodson are graduates of the RNZYS Youth Program, and they won the World Match Racing Tour and the $1million cheque at the end of the event, bollocking some of the world’s best of the regatta. Chris Steele, also a graduate, and the 2007 Optimist World Champ, knocked out the previous world champion Ian Williams. Steele and his team finished that regatta in fourth place.

But let’s not forget about the locals as well. The Shorthanded Sailing Association of New Zealand (SSANZ) has just wrapped up another successful two-handed series. Known as the Safety at Sea Triple Series, the three races have a combined distance of 210 nautical miles. And there are just two people on-board! The entry list saw 133 boats and 266 sailors who hard out race everything from 19 foot Pied Pipers, to Cookson 50’s and Martin 55’s. In January 2017, SSANZ will host the Round North Island Race. The 1,200 nautical mile race is capped to 39 entries however if the stopover marinas allowed more, then this number would be more than double.

In December 2016, Torbay Sailing Club (TBC) will have one of its biggest months in history. Not only do they host the annual Sir Peter Blake Regatta where over 400 kids race in the biggest off-the-beach regatta in the country, they are also hosting the World Sailing Youth World Championship which was awarded to New Zealand earlier this year. The world is once again coming to Auckland, to a place where orcas play at the top mark and penguins race you downwind.

Contrary to rumour, Kiwis do fly, and they proved this when the 18ft Skiff fleet flew to Fiji and dominated the Australian fleet on neutral turf. The relatively small fleet train week in and week out on the harbour with one goal – to beat the Aussies at every given opportunity.

See that’s one of the reasons that Kiwis are just so good and why sailing in New Zealand is considered a national sport. Fleets train sometimes three or four nights a week, and race on the weekend. Not just at their own club, but combined with others, and they travel relentlessly to ensure they are presented with the best opportunities to improve their skills.

This biggest factor is mixing it up. It’s rare to find a sailor in Auckland who just sticks to one class of boat. It’s considered normal to jump from class to class, off-the-beach to keelboat and vice versa.

The Etchells fleet in this country is relatively small when you consider the fleet sizes in Australia and beyond, but that didn’t stop a Kiwi boat from recently winning the European Championship in a 50 boat fleet. Why are they so good? They class jump, they travel, they coach, they make sailing their life.

When Kiwis are not racing for sheep stations, they are cruising the expansive volcanic coastlines in the very boats they race. For example, the Young 88 fleet, considered to be one of the biggest in the world, have intense one-design racing one weekend, and cruise the next.

Six years ago, during my first week in Auckland, my schedule was set.

It’s normal to knock off work an hour or so early, so you have time to get to the boat, throw on your gear, and get to the start line. This is life in Auckland, this is life in New Zealand. This is why Kiwis are on top of the world.

The other afternoon I took a stroll around the club and watched Emirates Team New Zealand fly by in their AC45 on another training session. This is what it’s all about. From grassroots to the elite, Auckland has something to offer everyone, and you don’t even have to leave your own backyard.