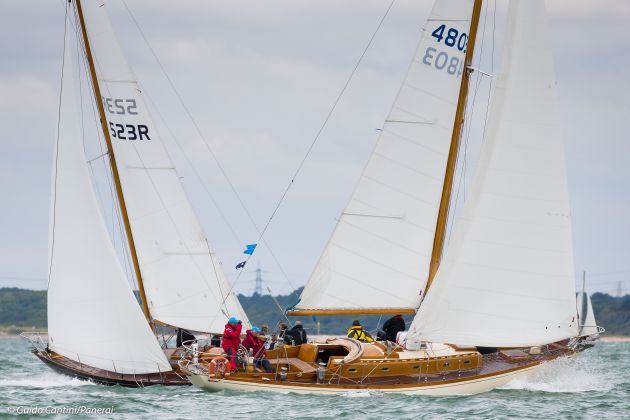 13/07/2017
12 July 2017 – The sun returned on day three of Panerai British Classic Week where the fleets completed race five of the series, followed by the traditional Ladies Race. Not only had the sun reappeared, but the wind had moderated too and racing took place in a much more manageable, if rather shifty, northerly breeze of 10 to 15 knots. After the strong winds of the last two days the chance to shed oilskins, soak up the sun and enjoy the scenery was much enjoyed by everyone.
Class 3 continues to be the most closely fought of the regatta. Today Michael Briggs’ Mikado beat second placed Cereste, owned by Jonathan and Scilla Dyke, by over four minutes. Cereste in turn beat third place Laughing Gull, owned by Barney Sandeman, by just four seconds, so that in the overall standings Cereste leads Mikado by two points with Tim Yetman’s Suvretta in third.
Andrew Pearson’s Bojar finally managed to break the stranglehold of Giovanni Belgrano’s Whooper on Class 2, beating her into second place by a minute and twenty-four seconds. David Murrin’s Cetewayo came third by thirteen seconds. Whooper continues to lead Class 2 by a very comfortable fourteen-point margin, but the fight for second and third is a close one with Gildas Rostain’s Volonte on twenty points, Bojar on twenty-two points, Brian Smullen’s Cuilaun on twenty-nine and Cetewayo on thirty.
Back ashore, Andrew Pearson talked through the race, “We had a really interesting day, with a complicated start across the Squadron line, and they all peeled off down the Island shore. We took a flyer to the other side, hoping we could set a kite, but by the time we got there, there wasn’t enough wind, so we were 8th or 9th at the first mark. From there we crawled our way back to 2nd on the water, 20 seconds behind Cetewayo, which gave us the win on handicap because we rate lower than she does. Whooper followed us in but we’d saved our time, so we’ve had a 1st, a 2nd and a 3rd in the last three races.
Asked what gave him the advantage over Whooper Andrew replied, “Three things: one, we’ve got a very large symmetric kite, and if we get that right we can fly it dead downwind and we’re as fast as anyone doing that. Secondly we had a tide break around the last mark. Finally, Whooper often has an enormous advantage over all of us with her drop keel so she can sail in much shallower water, but today’s course didn’t give them that advantage.”
Irvine Laidlaw’s Oui Fling took her fourth bullet of the regatta and now leads Class 1 by four points from Sean McMillan’s Flight of Ufford, who had finished second in the race. Michael Hough’s Chloe Giselle beat David Gryll’s Helen of Durgan in race five, but in the overall standings Helen of Durgan now lies third and Chloe Giselle fourth.
The battle between Richard Matthew’s Scorpio and Simon Payne’s Damian B continues to rage in Class 4. The lighter conditions worked in Scorpio’s favour and she beat Damian B by almost two minutes with John Mulcahy’s Estrella third. Overall Scorpio has regained the lead by three points from Damian B, with Estrella and Rufus Gilday’s Venya tied for third.
The Metre boats very much appreciated the lighter conditions and both fleets were back out in force. In the 6 Metres Robin Richardson and his team aboard St Kitts beat Fenton Burgin’s Sioma by just twenty-nine seconds with Tom Richardson’s Thistle third. In the overall standings Sioma’s lead has now been reduced to a single point from Thistle with St Kitts third.
In the 8 Metres it initially appeared that Murdoch McKillop’s Saskia had won race five from the Earl of Cork and Orrery and David Parson’s Athena with Christopher Courage’s Helen third. However, on returning ashore Saskia elected to retire following an on the water incident and so the race went to Athena with Helen second. Despite her retirement Saskia continues to lead the regatta, but her delta is reduced to a single point. Both Helen and Athena count ten points so it’s clear this class is going to go down to the wire as we go into the final two days of the regatta.
With the series racing complete for the day, it was the turn of the ladies to take the helm for the traditional Panerai British Classic Week Ladies’ Race. A building spring ebb meant the race committee kept the fleet close to Cowes for some furious short course racing. With midwife Rosie Parks on the helm, ably supported by Christine Belgrano, Mia Austen, Emma Cheesham, Giovanni Belgrano and Crawford, Whooper once again proved she’s a winner.
Speaking in the Panerai Lounge and clutching the Ladies Day Trophy, made by Isle of Wight based Sculptglass, Rosie paid tribute to her crew. “Today went really well! We had a brilliant start, my backing crew of Crawford and Gio made very, very good decisions and guided me around the race track and we got across the line first.”
This evening the participants are enjoying a BBQ and Crew Party at Cowes Corinthian Yacht Club. Tomorrow will feature the Long Inshore Race sponsored by Classic Boat and the rescheduled Open Boats Pontoon Party sponsored by Spirit Yachts and Classic Boat.