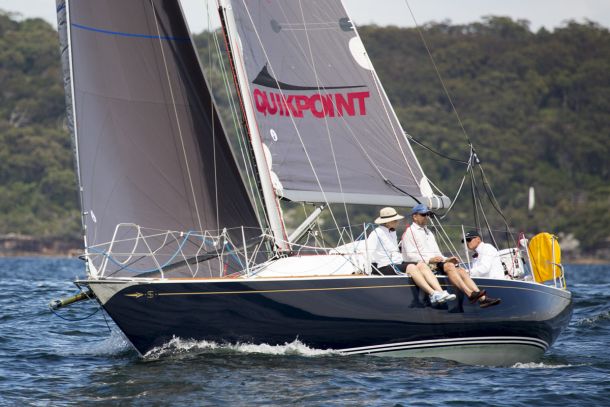 The Cruising Yacht Club of Australia was packed during the early hours of the morning with eager boat owners and crew willing on a light westerly breeze to build for Sunday racing.

As willing and hopeful as everyone was, Division A2 winner, Matt Wilkinson (Kerisma) could do nothing except soak up the Vitamin D and wait for a breeze as they hovered on the Harbour.

“It was a tough day, it was very light and we just had to keep the boat moving,” Wilkinson noted. “Fortunately she (Kerisma) likes the light air so we were really able to capitalise on that. Credit must go to our tactician, Jim Kerrison, he kept us on the right track and we were able to catch the occasional light gusts but it was a great day with all of the crew, even my son, Will, was able to call a couple of tacks and really get involved.”

Principal Race Officer, Robyn Morton shortened the race early when the light westerly forecast for the day never picked up and Kerisma along with other 107 boats seemed stationary.

“It was a beautiful day but unfortunately we started with seven to eight knots that ceased the moment they were recorded,” Morton observed from the start boat. “At around 1:30pm we got a bit of a south-easterly puff that pushed some boats through that had been longing for the finish line in the light conditions, but that was about it, all of the boats appeared to just ‘bob-around’.

“The highlight of the day was seeing three or four big boats coming out of Rose Bay with their spinnakers up and then just before the finish line, a south westerly gust made things really interesting.”

Duende (Damien Parkes) claimed victory in Division A1 with the Judel Vrolijk 52 , although being modified for Australian Waters, is still performing well.

“It was good to come away with the win because the light conditions didn’t really suit us,” Kearns began. “To the credit of the crew, they made no mistakes. With the good wind dying out we got the advantage on the last upwind leg, where as other boats didn’t and that’s probably where we were able to edge in front and stay there.”

“We had a superb race, starting on our course where we headed north-west from the start boat instead of the more favoured south-west starboard tack,” Blanc-Ramos pointed out. “We had three non-sailors on board but they were keen and really focused which contributed to a good day which was helped by the drop of wind on the later starters.”

Weekly prizes are awarded to the top three placegetters in each division and include exclusive CYCA Land Rover Winter Series merchandise. One lucky division winner is drawn each week to receive a Land Rover Evoque Experience for a week.

“We won this experience last year and it was fantastic, so much so that we ended up purchasing a Land Rover Freelander,” Wilkinson said.

In addition, the Noakes Group is providing a lift stand launch and two free lay days for one lucky division winner each week. A1 Division winner, Duende (Damien Parkes) was the recipient of this week’s Noakes prize.

Race Six of the Land Rover Sydney Winter Series will be held on Sunday 31 May starting from 11.30am.