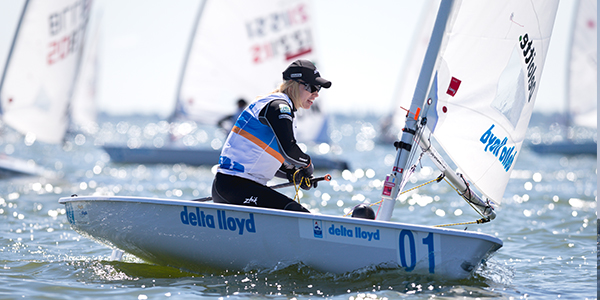 Thursday May 25th, 2017 –  Another day with light wind conditions at the Delta Lloyd Regatta. It’s the warmest regatta in years and sailors have sailed every planned race, so the vibe is really good. Due to the light conditions today, there were some delays. The 49erFX sailors had time to relax in the sun, awaiting their first race.

“The delay wasn’t that bad with the sun out”, said Hannah Mills from Britain. The competition in the 49erFX class is really exciting, the top 3 changes every day. For the Mills it’s a good learning curve. “I just transferred to the 49er after my Olympic campaign in the 470. Alain Sign has a lot of experience in the 49er, so it’s good to sail with him and be coached by him at the same time. This week is a good learning curve for me, mixed conditions on the water and great competition.” Mills and Sign stand in 3rd place after 9 races. The Croatian team is leading and Annemiek Bekkering with Jeske Kisters are in second place: “We could just race really fast today”, says Kisters.

It’s an exciting week in the combined 470 field. The women are happy to sail together with the man because they can learn a lot from them. But the men also learn from the women tells Austrian Nikolaus Kampelmühler: “The Dutch women are really fast downwind, when we are near them we try to watch how they handle the boat and learn from this.” Kampelmühler is sailing with Thomas Czajka, it’s their fourth event together in the 470. “We just started sailing together, I’m coming from the 420 youth class. The week so far is going ok. We are here to qualify us for the World Cup 2018, so we have to end in the top 4 tomorrow.” The biggest competition for the Austrian guys are the Russian Pavel Sozykin and Denis Gribanov, the Dutch Anneloes van Veen and Afrodite Kyranakou and the Italian team. Those are also the teams in top 4 at this moment.

Megan Pascoe is still leading the fleet in the 2.4mR. “Today was a bit closer racing. It’s nice to be back at racing and in 1st place here.” Her biggest opponent is Carol Dugdale who is getting better and better during the week. Dutch Cor de Graaff is in 3rd place after 6 races.

After three days of racing on the IJsselmeer, Japan’s, Manami Doi, is leading the fleet in the Laser Radial. For the Dutch, Marit Bouwmeester, it’s her first event after her gold medal in Rio. She mentioned: “I had some physical problems when I started the season at the end April in Hyères – I couldn’t finish that event. The first day at Medemblik was good, the second day not so good. I’m trying to find my rhythm here in preparation for the World Championships this summer.”

The toung Australian women's team is getting valuable experience but won't feature in the medal races. Best placed is Zoe Thomson who is 37th, four places ahead of Mara Stransky.

In the the Laser fleet, Britain’s Elliot Hanson, is leading, Croatia’s Tony Stipanovic is in second place, while Pavlos Kontides, from Cyprus, is in third. They have their medal race tomorrow night, however, anything can happen with three more races planned in the morning.

It was a bad day for the Aussies who went into it with five sailors in the top 10. Worst to suffer was Matt Wearn, who finds himself in 11th place after a Black Flag disqualification. He also had a 25th place, which becomes his drop. Mitchell Kennedy and Luke Elliott are best placed, in sixth and seventh, while Finn Alexander is 10th.

The Germans, Tim Fischer and Fabian Graf, are leading the 49er field after 9 races. Graf comments: “The week is going well, with yesterday being the toughest day for us. In the first race we capsized and gained 3 black flags, but we had a great come back. Today there was a tricky wind with a lot of shifts. However, we sailed well with the wind shifts so it wasn’t bad.”

Badloe takes over the lead in RS:X

In the RS:X, Kiran Badloe is leading the fleet, due to a bad start from Dorian van Rijsselberghe. In third place is the Britain, Samuel Sills: “It’s great to be here. Today was a bit difficult with the light winds, which make it physically a lot of work. I’ve had lot’s of fun with Dorian and Kiran, but they’re hard to beat in this event. Their participation makes this kind of low level event more interesting. For me it’s good to race here and learn a lot. My goal for this event is to finish in the top 12 and participate in the finals, and learning the new format.” The RS:X are racing in a new format this event:

The top 12 from the opening series will race in the quarter finals. The best 6 will then go into the semi finals. After that, the top 3 decide who will win the gold in the finals. All competitors start with 0 points for each final.