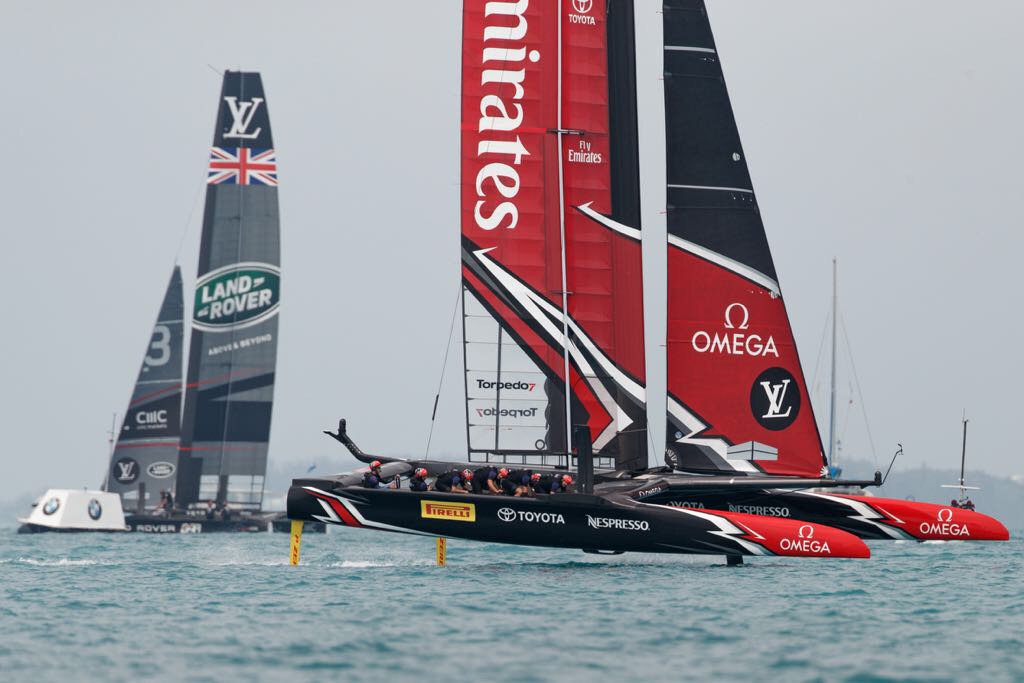 No racing was possible yesterday in the qualifying series for the 35th America's Cup and today there was little improvement in wind speed. Indeed Sir Ben Ainslie no doubt wished the first race today had been called off too.

A puffy, swinging zephyr hovering at around 7 knots meant the first two races could start and what had looked like the battle for last place  – to decide who misses out on the semi-finals – between Team Japan and Team France got underway.

It immediately became obvious that there is a lot of difference in light wind foils among the teams. The French struggled to get up on the foils, were late across the line and dunked their bows. The Japanese boat, in contrast, looked smooth through the manoeuvres and stayed on the foils. The race became a procession and Dean Barker's crew crossed the line a massive six minutes ahead.

The second race started in similar conditions and in similar fashion – with no attacks during the pre-start and an emphasis on just getting out of the water to sail fast.

There was nothing between the two boats as they raced towards the first mark, reaching speeds of 25 to 28 knots in just 7 knots of breeze. But disaster struck for the Brits. As they gybed around the reach mark they hit the water and stopped dead.

Ever the competitor, but 350 metres behind in a heartbeat, Ainslie attacked the Kiwis as they came back up the course towards him. Peter Burling simply steered the faster New Zealand boat away from danger and the on-water umpire decided there was no infringement.

From that point on it was an embarrassment for the Brits as the Kiwis raced to more than a leg ahead. Finally, Ben could take no more and sitting at 6.25 behind, he called the race committee and announced his retirement from the race.

“In these light air races it can really come down to the manoeuvring,” said Emirates Team New Zealand skipper Glenn Ashby. “The boats are extremely tricky to get wound up and get out of the manoeuvre. While you look comfortable going into a manoeuvre it is actually the exit that can be very difficult. And we were just fortunate that we managed to pull off that first gybe well today and keep our boat on its foils for longer than the British.”

With the wind going even lighter, the AP was hoisted and the match between Oracle Team USA and Team Japan was put on hold.

When the race finally did get underway, Dean Barker continued his great form in the pre-start. He attacked his old nemesis, Jimmy Spithill and forced him into irons outside the box. Oracle was penalised two boat lengths at the start and the Japanese boat sped away to a comfortable 21 second lead at the reach mark. Oracle closed the gap but it still looked as though the processions from the two earlier races were going to continue.

However Tom Slingsby, the tactician on Oracle, has a well-earned reputation for reading a race course and he had apparently spotted an area of better pressure to the left of the bottom gate. Coming in for the second time, he called for a risky second gybe to give the American boat that side of the course.

In better pressure and with better VMG, they sped into the lead but there was still risk. “We have to lay,” Slingsby advised his skipper, who responded and lifted the big boat through the top gate. Barker was forced into a second tack to make the mark and the race was done and dusted. Oracle led by 32 seconds at the finish and Dean Barker again was subjected to the sight of Spithill's back disappearing into the distance.

Having lost the first encounter between these two old rivals, the British were desperate to get their third win of the series. But the dropping wind would make for a very slow and excruciating match race for both teams.

Ainslie went straight for the jugular during the pre-start and put a port/starboard penalty on Franck Cammas, which allowed the Brits to hit the reach mark at speed. Both boats stayed on the foils through the first gybe but from there it was old-style displacement hull racing for a time.

“Rudders gone” was the call from Ben as his rudder elevators stalled through a gybe. Spending only 70% of the race on foils to this point, France finally got out of the water and swept past.

The wind was dropping to below the six knot limit at times and the boats were struggling to do 12 knots. They drifted through the bottom gate.

A slow beat ensued, with both boats falling off the foils during every manoeuvre. It was followed by a slow run.

At the bottom mark for the last time, the French went to the right of the course and the Brits followed, but tacked almost immediately to the slightly better pressure on the left.

The course was shortened and the top mark became the finish. What followed was an old-fashioned tacking duel with both boats managing the odd foiling tack but usually dipping into the water and slowing dramatically.

Finally it was course management that won the day, as Ainslie came into the finish on starboard and Cammas was forced to duck, pushing him past the layline as GBR limped across for a much-needed win.

Today's racing showed that while the light airs have changed some dynamics, Oracle and ETNZ are still the teams to beat. We haven't seen Artemis in the light yet, but the two points that BAR carried forward from the World Series are proving to be very valuable.

With light conditons expected to persist, Artemis Racing will need to be on their game. They race twice.