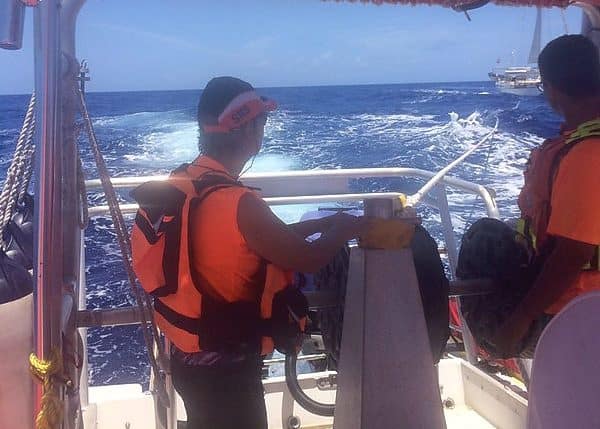 St Maarten's The Daily Herald has reported “one of those rescues” where a cruising couple called for help when seasickness and fatigue, combined with an engine that wasn't working and some very old and saggy sails, brought them to their knees.

The local volunteer rescue group, SNSM, were called to assist the yacht by the operational surveillance centre of Antilles-Guyane (CROSS-AG). The yacht was located between 15 and 20 miles west of St. Martin.

After reading the report, it sounds as though the couple were lucky to receive any help at all.

“SNSM’s rigid inflatable RIB Rescue Star was not really suited to this operation, but according to SNSM, the Dutch-side sea rescue was not available to assist. There was a delay in departure due to Marigot being blocked by the abolition of slavery ceremony at the roundabout, and SNSM, despite the emergency, is not allowed to use emergency lights like the police or ambulance, so had to wait, according to the report. The crew of four finally departed at 10:10am,” reported The Herald.

An hour later, SNSM crew reached the yacht. On board were a Canadian couple and a dog and cat. They had been sailing for several days, were exhausted from fatigue and sea sickness, and could not continue.

The yacht’s engine had broken down and the sails were in poor condition. The couple was heading to St. Martin in order to repair the engine. After four hours of towing, the yacht was brought into Fort Louis Marina at 3:10pm.