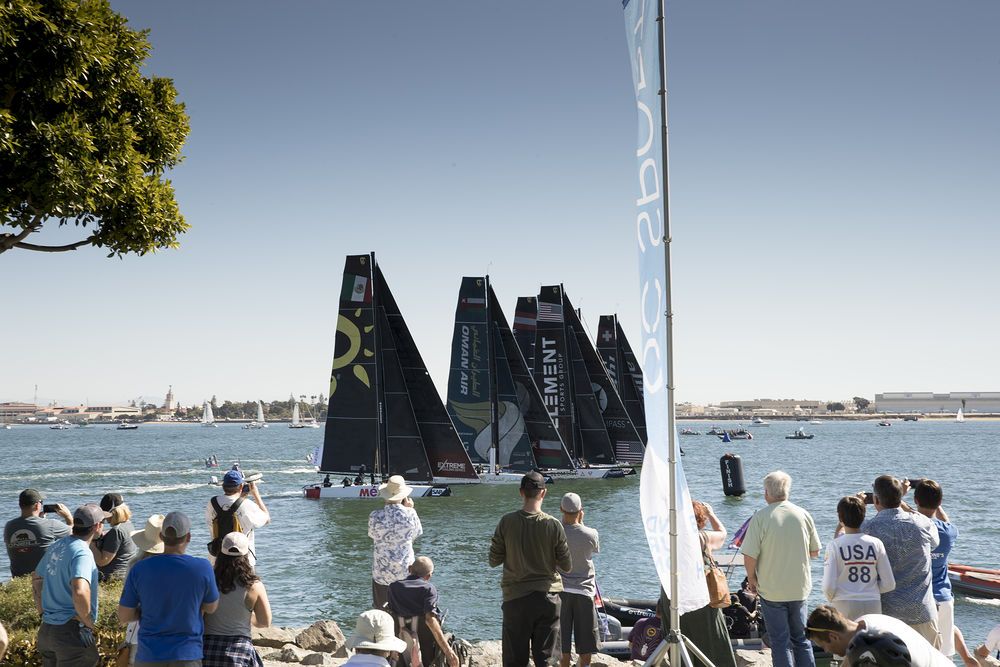 It was a long day for the Extreme Sailing Series fleet as light winds teased the teams on the penultimate day of racing in San Diego.

Despite the challenging forecasts for the afternoon, Race Director John Craig remained optimistic as the seven international crews docked out of their Harbor Island berths and made their way onto the glistening waters of San Diego Bay.

However, the wind refused to cooperate and an exhibition race was called. Seven smiling VIP guests boarded the boats for the GC32 Guest Sailor experience that the pioneering Extreme Sailing Series is renowned for, and sailed around the course with the pros, enjoying a big hit of Californian sunshine.

Exhibition race over, it was back to business. The teams dashed off the start line at full pelt, keen to make the most of the building breeze. Taking the top spot on race 14, it looked like SAP Extreme Sailing Team were back in the game, following a string of inconsistent results over the previous two days.

“The breeze was doing some big rotations but we picked our course well,” explained helm, Adam Minoprio. “It was fun, we had a laugh, and the crowds were great. We're hoping for more wind tomorrow.”

Despite a third place finish in the first race of the day, coming in behind the Danes and Oman Air, the Swiss weren't ready to give up the ghost. Fighting back, they took the win in race 15, maintaining their five-point lead over the Omani-flagged boat from the previous day.

“The two races today were pretty good for us,” said a pleased Arnaud Psarofaghis, the team's co-skipper and helm. “We perform well in light conditions so we have an advantage. We're definitely looking forward to tomorrow.”

After a promising start to the day's racing, the wind began to die a death, dropping rapidly as the afternoon progressed. A series of exhibition races were called once again, before Race Management returned the fleet to the dock, ready to rest up for the final day of competition on Sunday.

“Today was not the day we were looking for,” said Extreme Sailing Series Race Director, John Craig. “The wind ended up too light at only 6 knots, but I'm pleased we got some great exhibition races in for the crowds. The scoring races we ran didn't really affect the scores, so it's tight. Tomorrow should be interesting.”

Lagging behind since day one in San Diego, British-flagged INEOS Rebels were disappointed not to have the chance to climb the ranks in today's races. Struggling for speed throughout the US Act, the Brits head into the final day in San Diego ranked fifth.

“It's really not going well for us,” admitted the team's disheartened skipper, Will Alloway. “We need to find out what we're doing wrong; it's a shame not to have had more of a chance today. We'd like to see some big improvements tomorrow.”