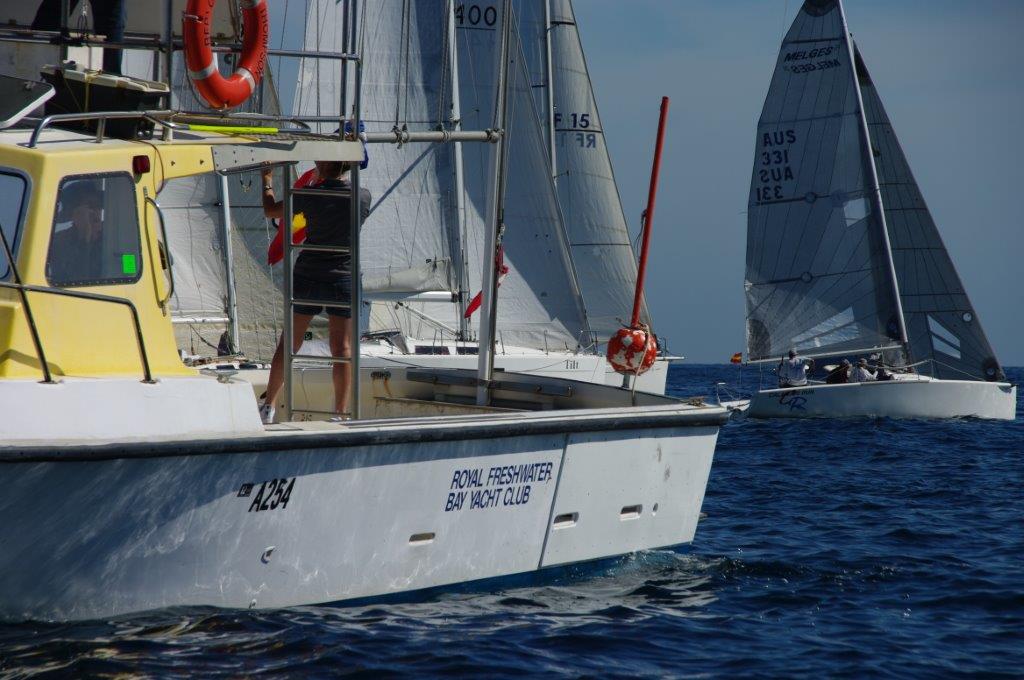 Start of the Rotto Transit race.

While the wind was light it was by all accounts a glorious weekend for the sixth Rottnest Festival of Sail.

The annual event is held to support the Rottnest Foundation and its work in conserving the essence of the island.

For the first time, the 2016 event included the 49er Class WA State Championship. It took many back to the days when the 18 Footers included the island in their national circuit. Skiffs look fantastic racing in the clear waters with Thomson Bay in the background.

After a short delay waiting for wind off Port Beach in Fremantle, yachts started in two fleets, an Offshore Round the Island Race and a Transit Race to Rottnest. Both races would take the yachts across to the island to the finish line in Thomson Bay.

For the Offshore Race, it was close contest to the first day buoy close to the beach before the yachts turned to head west to Rottnest. Dave Walling’s The Next Factor was first to mark one but the Farr 40 was closely followed by Ian Clyne’s Joss. It was Simon Prosser’s Sante who came around the mark behind and took a more northern line, she appeared to pick up more breeze than the others. This worked in favour of the Adams 10.6 and she was the second yacht to appear for the onlookers at Rottnest. But the race was not over yet, the offshore course included a complete rounding of Rottnest Island.

As the offshore race fleet were rounding West End, the transit race fleet were arriving at the finish line in Thomson Bay. The fleet was a great mix of yachts in all shapes and sizes, the largest a Beneteau First 44.7 and the smallest a Spacesailer 22 owned by Gerry Murphy.

The yachts enjoyed flat water, sunny conditions and a moderate southerly wind. The first yacht to arrive took just over 2 hours to complete the course and was Ross McLaren’s French Kiss, the Beneteau. Next was a Melges, Rob Mennie’s Calamari Run, and then Conrad Todd’s Hanse 400, Tilt.

The overall results on corrected time went in favour of the smaller vessels in the light wind conditions with first place going to the MB 24 Martello, Mary Joyce. Second was the Gerry Murphy’s By Hook or By Crooke and third went to Craig Knell’s Emeraude. As the transit race yachts picked up their moorings in the bay they had a great display of skiff racing with the 49er course close to shore in Thomson Bay.

Brothers Lachy and Sam Gilmour with their crews Ryan Donaldson and Cameron Seagreen were having a great contest in the 49ers. After five races on the day it was Sam and Cameron who led going in to day two of the state championship. The 49erFX with slightly smaller rigs were also enjoying the location. Liam Seagreen with crew Conor Nicholas led the all-girls team of Nicola Armstrong and Lucy Syme.

The first yacht to finish in the offshore fleet was The Next Factor in 4 hours and 8 minutes. Joss and then Sante followed soon after the two yachts finishing within minutes of each other. Overall it was Hugh Warner’s Ocean Ranger who took the win on corrected time. Experienced helm and sailmaker Brent Fowler was on-board and thoroughly enjoyed both the sailing and social aspect of the weekend. Second on corrected time was Apo Kato, Kevin Palassis and they also placed first on AMS handicap. The Next Factor was third overall on IRC and Fastest.

After a very pleasant afternoon moored in the bay and exploring Rottnest Island, competitors, regatta officials and supporters gathered at Hotel Rottnest for the day’s race results and an evening socialising.

Sunday morning was another glorious day and Rotto certainly brought out the sunny conditions for everyone to enjoy. Sadly the wind did not behave for the yachts participating in the Cruise in Company Around the Island and most pulled out of the escorted sail to stop for a swim. At least they had toured the island and picturesque bays in very pleasant conditions.

Back in Thomson Bay the 49er Race Officer called an early end to the day after two races due to lack of wind.

Overall winners in the 49er WA State Championship were Sam Gilmour and Cameron Seagreen with Liam Seagreen and Conor Nicholas taking the 49erFX title for 2016. The exciting skiffs are looking forward to being part of the festival again and the word has spread amongst those who missed out this time around.

Royal Freshwater Bay Yacht Club hosted a magnificent Rottnest Foundation Twilight sail and presentation evening to wrap up another great year for the event. Yachts and 49ers combined for the presentation evening and the winners were presented with their trophies by the Honourable Colin Barnett MLA, Premier of Western Australia. Guests were captivated by Mr Barnett’s speech which included some interesting tales of his connection to WA’s iconic island and its unique marsupial, the Quokka.

The 2017 Rottnest Festival of Sail is scheduled for the weekend of 1 & 2 April. Visit rfbyc.asn.au for more information.