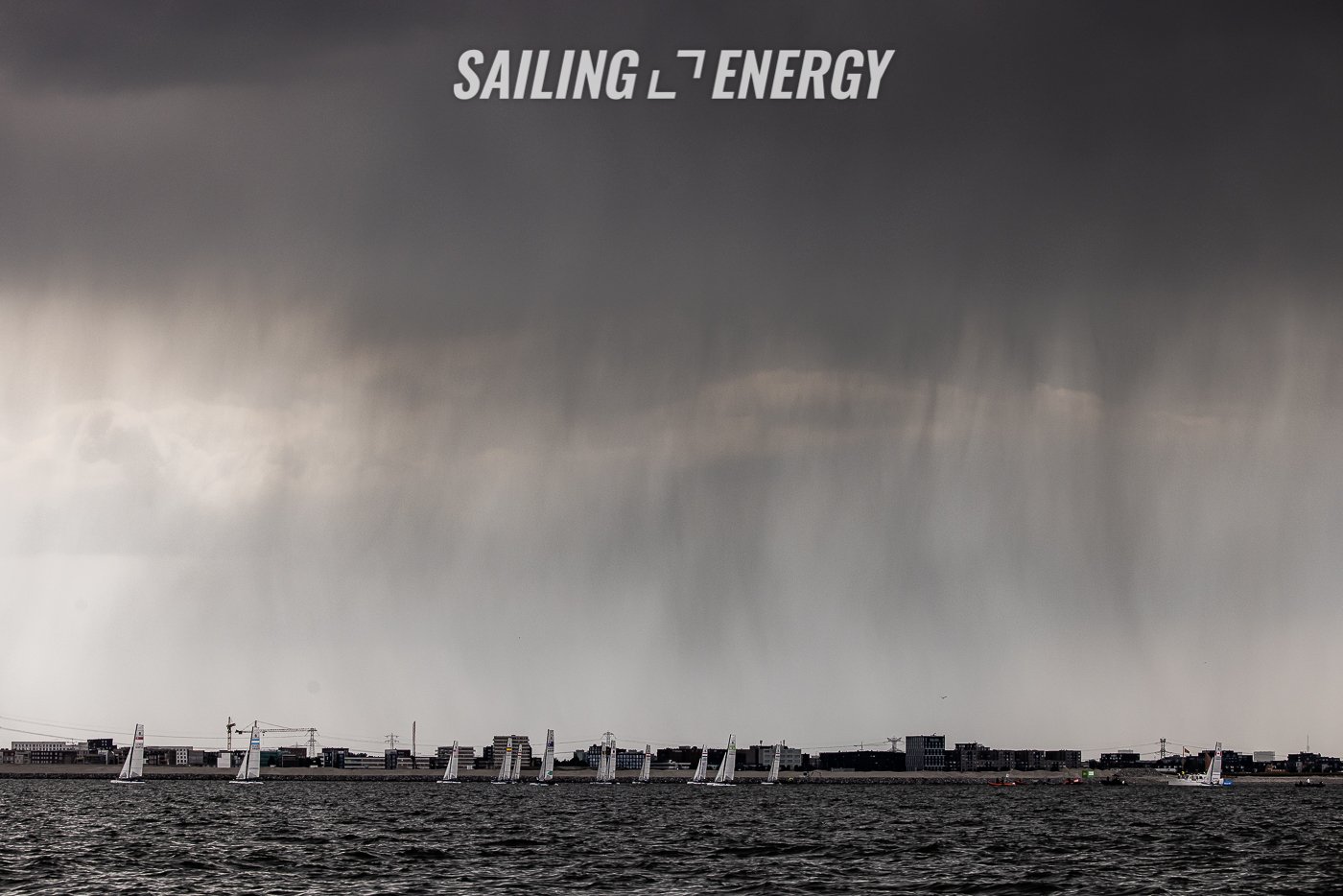 Overcast and no wind on day one of racing. Pic - Sailing Energy

Thirty Australian sailors across seven Olympic classes threw themselves back into action overnight as the Hempel World Cup Allianz Regatta got underway in Almere, The Netherlands.

Unfortunately, light winds made it impossible for the Race Committee with only two races completed across all classes. Accompanying the light winds were extreme amounts of seaweed across the lake making it a challenge for sailors to navigate the racecourse.

49er sailor Joel Turner is trying to figure out how to use the abundant algae to his advantage. He shared, “There is a whole lot of seaweed, more than we’ve ever experienced before so we are trying to figure out some techniques to combat that and hopefully we can use it as an opportunity to make gains against the rest of the fleet.”

The 49er class is split into two fleets and the Australian squad is supported by coach Euan McNicol.

“The Squad are looking at a tough week of racing here, putting some of the lessons learned in Palma and Hyeres into action. For me it’s great to be back with the group after some time off at home to begin the journey of becoming a dad,” McNicol remarked.

The cloud-dominated breeze made for tricky and variable racing with McNicol pleased by how the squad handled the challenging racecourse. Australian Sailing Futures sailors Ryan Littlechild and Jack Hildebrand came away with a third in their only race of the day.

“The first race was abandoned for Yellow fleet after two laps with both Australian teams in good position for a top-three finish,” McNicol commented. “It was great to see the younger Australian teams in Blue fleet put together a keeper score first up, racing at the front of the fleet.”

The ILCA 6 fleet was the other to finish a race, with young Victorian Casey Imeneo the best placed Australian in sixth. Dutch and Belgian Olympian Carolijn Brouwer has joined the Australian Sailing Team as the ILCA 6 coach this year and is providing a depth of experience and knowledge to the young squad.

Brouwer sees this as an opportunity for the squad to build on their racing routine. “It’s a very similar size fleet to Hyeres with 62 boats in one single fleet, so the girls need to be ready for some intense racing and a good battle.

“Getting off the start line well and being able to hold your lane are key points for the squad this week, and associated with that is to keep building a clear pre-start routine.”

The 49erFX fleet were greeted with zero knots when they arrived on their racecourse today and were unable to commence racing. Tokyo 2020 Olympian Tess Lloyd is back for her first international event since the Games, this time with a new partner in 20-year-old Dervla Duggan as they embark on a campaign for Paris 2024.

“I’m excited to be back on the racecourse and also excited for Derv as it’s her first major regatta in the FX,” Lloyd shared. “Derv has come from the 29er with a keen and determined attitude and she is adding a super fun vibe to our team.”

The Mixed 470 teams towed out to the racecourse only to find no wind to race in whilst the Nacra 17 fleet attempted a race only to have it abandoned on the first leg.

Racing is set to continue overnight with catch-up races scheduled alongside the Formula Kites and iQFOiL commencing their slate.