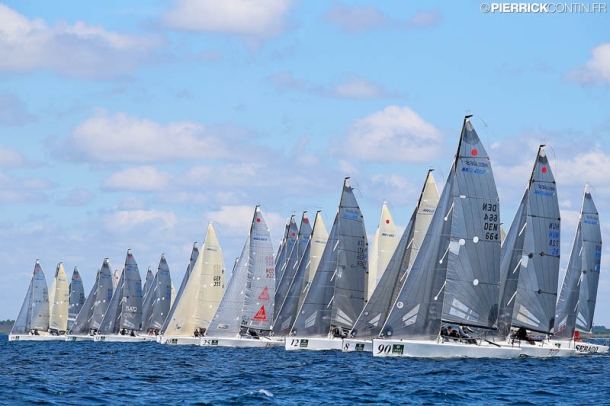 The first day of the 2015 Melges 24 World Championship has finished in Middelfart, Denmark with a ninety-five boats on the starting line. The event is organized by Match Racing Denmark along with the Middelfart Sailing Club in cooperation with International Melges 24 Class Association.

Light winds, sometimes quite like imperceptible, and some strong current did not prevent the Principal Race Officer Hank Stuart to complete three races, exploited by Czech Martin Trcka to bring his ICZ/Rodop CZE-704 (2-9-5) to the top spot of provisional standing with eleven point margin on EFG SUI-684 (6-2-19), helmed by Chris Rast from Switzerland winner of the Audi tron Sailing Series event in Porto Venere, and fifteen on Italian Maidollis ITA-822 (26-1-4) owned by Gianluca Perego and helmed by former Melges 24 World Champion Carlo Fracassoli, penalized due to an OCS under the Zulu flag.

Also in the top five we have Italian Marrakesch Express ITA-636 (5-29-2), with a former Italian Olympian and reigning Melges 24 European Champion Matteo Ivaldi at the helm, and the 2014 leader of the Melges 24 world ranking, Italian Audi tron ITA-840 (18-12-7), with Riccardo Simoneschi and Gabriele Benussi in the cockpit.

The sixth spot of the standing is in the hands of the Estonian Tõnu Tõniste's Lenny EST-790 (21-24-1), who is the first of the Corinthians in front of former Corinthian Storm Capital Sail Racing NOR-751 from Norway (51-4-18) with øyvind Jahre in helm as a fifteenth in overall ranking; and Elsa DEN-808 (56-3-16) helmed by Jesper Baungaard as the seventeenth in overall ranking.