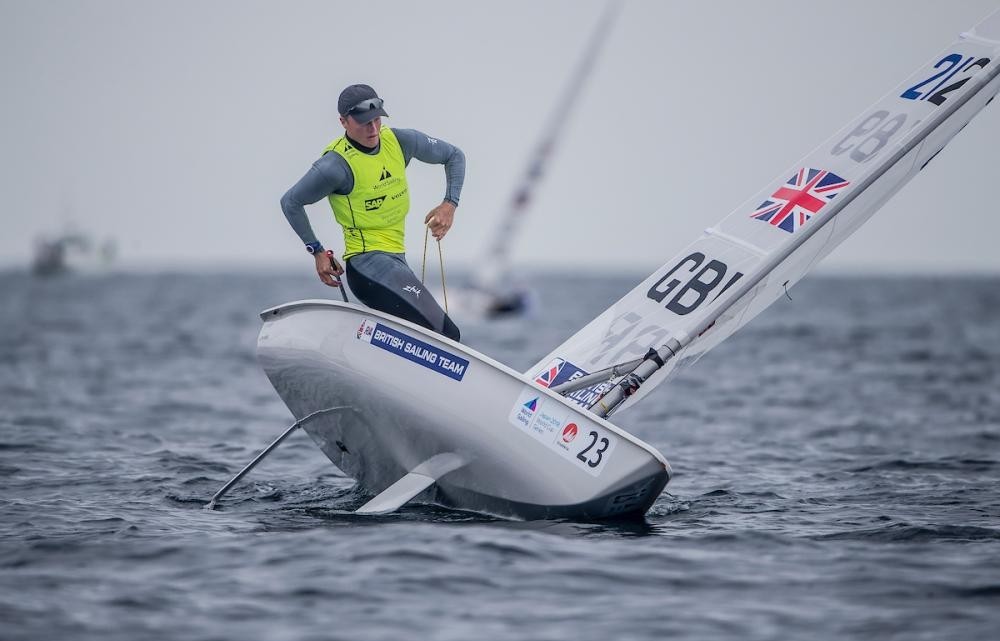 Light wind and rainfall meant that just one race out of 28 scheduled could be completed at Sailing’s World Cup Series Round in Enoshima, Japan.

The Laser, Laser Radial and 470 fleets hit the water mid-afternoon as a 5-6 knot north easterly breeze was present on Sagami Bay. All four fleets attempted to get racing underway, but only the 59-boat Laser fleet was able to complete a race.

As no racing was possible in the 49er, 49erFX, Nacra 17, Men’s RS:X and Women’s RS:X, their Opening Series has now concluded and the top ten in each will advance to Saturday’s Medal Race. Martine Grael and Kahena Kunze (BRA) have wrapped up gold in the 49erFX as they hold an unassailable 26-point advantage over their rivals.

In the single Laser race, Lorenzo Chiavarini (GBR) positioned himself at the middle of the line at the start and managed to read the conditions expertly on the first upwind to round more than 30 seconds ahead of Benjamin Vadnai of Hungary.

From there, Chiavarini maintained his focus, and with clean air in his sails, he was able to extend his advantage and take a convincing race win. Vadnai also pulled clear of the pack and was able to take a deserved second, but the term snakes and ladders could not be better applied to what occurred behind them.

Crowded, sometimes chaotic mark roundings and a tightly-bunched field on the upwinds and downwinds meant that huge gains and huge losses occurred.

Philipp Buhl (GER) was a benefactor, moving up from 24th to tenth, whereas Filip Jurisic (CRO) suffered, going from seventh on the first upwind down to 21st at the finish.

Leader Elliot Hanson (GBR) maintained focus to come through in sixth to hold a ten-point advantage over Tonci Stipanovic (CRO), who finished the race in fourth. Matt Wearn (AUS) moved up to third overall after a fifth.

On the competition, Hanson commented, “We had another tricky race in a light, offshore gradient day. I managed to gain throughout the race after being on the outside of the first big gain to come home in 6th.

“I’ve done a good job of staying consistent so far this week by taking minimal risks, and responding well to the changes.

“It’s nice to have a low score at this stage in the regatta, but I’m sure tomorrow will provide another great test to all of us.

“The British Laser squad is in a healthy position right now – it’s an exciting time to be part of it. The class has been dominated by other nations for a number of years and it’s nice to potentially now be part of the squad that could knock them off their perch.”

The Women’s 470 started a race but had to abandon as Anneloes van Veen (NED) explained, “It was a good decision to send us out, it seemed there was some wind so we had to go and try it. We got there and it was really light. It did build and we started a race but there was a big shift so it wasn’t completely fair and they abandoned.”

Van Veen and her helm Afrodite Kyranakou (NED) are tied for the lead with Benedetta di Salle and Alessandra Dubbini (ITA) on 21 points.

Although they didn’t race, Kryanakou was pleased to head out onto the water, “It was another good opportunity to see the conditions and sea state and what we may face at Tokyo 2020. Every day on the water is really productive.

“Every day on the water is productive so we try to observe and see what happens. So far, we have done well and it’s also a bonus to see the different conditions because then we know what to expect in two years. I just hope to go out a lot more and see what else I can learn from then area so I can best prepare for the coming Games.”

The Women’s 470, Men’s 470, Finn and Laser Radial fleets will continue their fleet racing on Saturday.

Due to no racing on Friday, the Opening Series for the 49erFX, 49er, Nacra 17, Men’s RS:X and Women’s RS:X has now concluded.

The top ten in each fleet will advance to Saturday’s Medal Races.

Brazil’s Martine Grael and Kahena Kunze have gold signed, sealed and delivered, but there will be a fight on for silver and bronze. Charlotte Dobson and Saskia Tidey (GBR) are on 37 points followed by Ida Marie Baad Nielsen and Marie Thusgaard Olsen (DEN) on 40, Alex Maloney and Molly Meech (NZL) on 41 and Klara Wester and Rebecca Netzler (SWE) on 42.

Meanwhile, it will be a winner-takes-all battle in the 49er. James Peters and Fynn Sterritt (GBR) and Lukasz Przybytek and Pawel Kolodzinski (POL) are tied on 52 points apiece after nine tense fleet races. The British and Polish teams will have to keep their eyes open for Logan Dunning Beck and Oscar Gunn (NZL) who are third on 56.

China’s Peina Chen and Great Britain’s Bryony Shaw will lock horns in the Women’s RS:X on Saturday. They are split by three points – Chen on 30 and Shaw on 33. Lilian de Geus (NED) follows on 39 and Charline Picon (FRA) is fourth on 43.

Kiran Badloe (NED) will head into the Medal Race on 33 points, seven clear of Mattia Camboni (ITA) in second. Mateo Sanz Lanz (SUI) is third on 43 points and Pierre Le Coq (FRA) is a point behind.

Ruggero Tita and Caterina Banti (ITA) are poised to continue their unbeaten run in the Nacra 17, sitting five points clear of Jason Waterhouse and Lisa Darmanin (AUS) going into the Medal Race. The Italians and Australians are on 27 and 32 points respectively. Vittorio Bissaro and Maelle Frascari (ITA) are third on 38, Nathan and Haylee Outteridge (AUS) fourth on 39 and John Gimson and Anna Burnet (GBR) are fifth on 41.