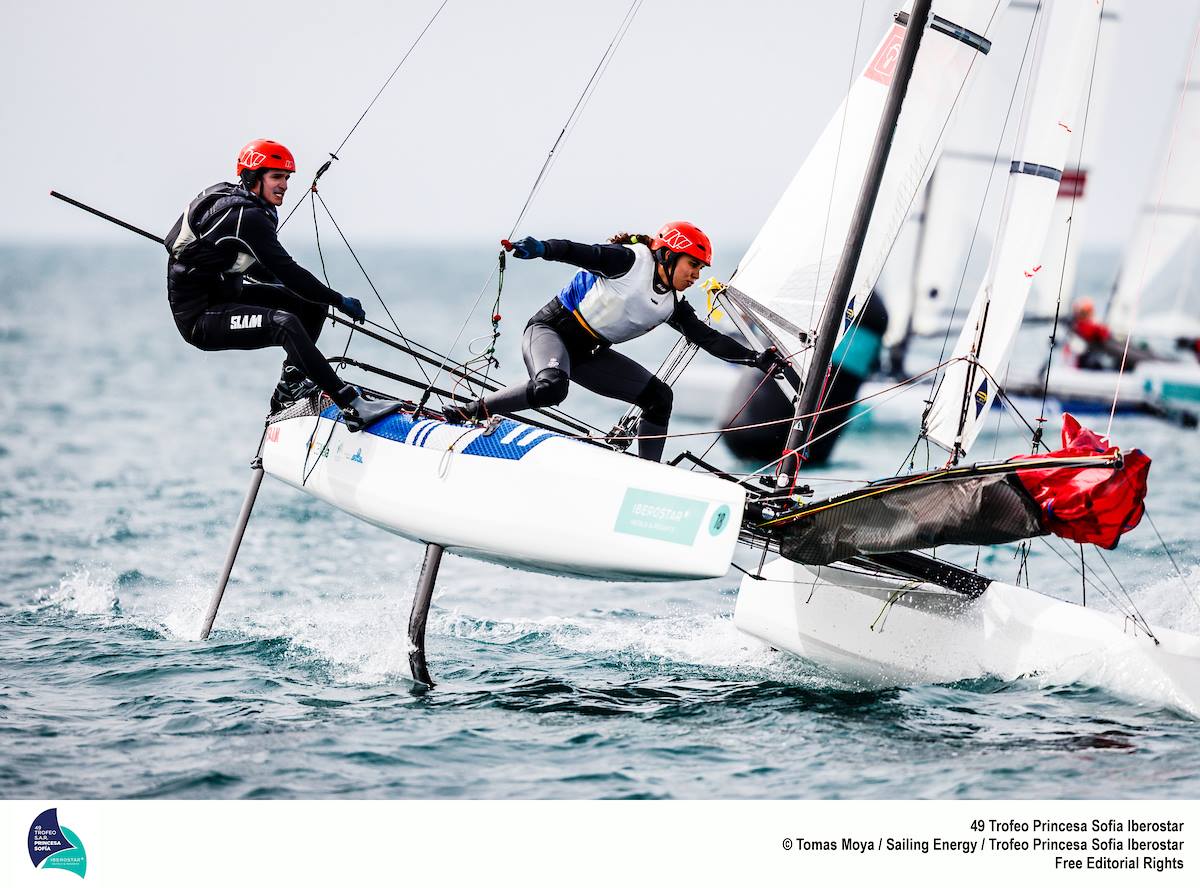 The light, unsettled breezes on Mallorca's famous Bay of Palma presented a really testing opening day at the 49th Trofeo Princesa Sofia Iberostar. With a maximum eight race courses in operation it was often the case that one fleet was sturggling in next to no breeze while classes on the opposite side of the substantial bay was enjoying good racing in 10kts of wind

So the record sized, full capacity Laser fleets, a total of 300 Standard and Radials, only managed one single race while the 49er, FX and Nacra 17 classes still hit their scheduled three race target for the first day.

There was something of a dream return to the 49er class for Denmark's 2008 Olympic gold winner Jonas Warrer. After finishing fourth in Rio Warrer, who has just turned 39, took time out from the men's skiff class and has been focused on M32 racing.  But the chance to partner with 19 year old fellow Aarhus sailor Jakob Precht Jensen has re-ignited his Olympic dream, not least to pursue World Championship success this summer on their home waters.
The Danish duo opened their first ever Olympic regatta together with two wins and a discarded 10th to lead the Men's Skiff fleet after three races.

“When you are half way up the first beat of the first race and the second guys are more than 50 metres behind then that is a good feeling.” grinned Warrer in the boatpark at the CNA S'Arenal, “And then making two first places really made our day. We started opposite from the pack and lead from start to finish of both races. But, then tomorrow, it can be a different story. But we are confident. We are doing things right and I think we have good speed.“

Warrer and Precht Jensen have been together since October but have had little time together in the boat. The Qingdao gold medallist is mixing this programme with coaching different teams. They had a week of training in India as well as time in chilly Denmark when they set out together.

“We are both from Aarhus and so that is a big, big thing for us this year. And then the Olympics is the goal beyond that. We have a good group in Denmark, more than last time.“

Warrer last won the Trofeo Princesa Sofia regatta in 2012 with Soren Hansen but missed out on a close selection battle for the London  2012 Olympics where compatriots Allan Nørregaard and Peter Lang won bronze.

“We have a good chemistry and we fit each other well. We have not done a regatta of any type together up until today and so we could not really have hoped for a better start. But tomorrow is another day,” Precht Jensen commented.

If the Danish duo had a dream start, the first day of the 49th Trofeo Princesa Sofia Iberostar was also something of a baptism of fire for Britain's Nicola Boniface in the Nacra 17 fleet. Drafted in to partner world championship winning helm Ben Saxton after an injury sidelined crew Katie Dabson, Boniface proved herself up to the task as they sailed 2,1,3 for the day to lie third after the discard is applied. Italy's 2017 Nacra 17 World Championship bronze medallists Ruggero Tita and Caterina Banti lead from Argentina's Olympic champions Santi Lange and Cecilia Carranzas Saroli.

“This was really last minute. I arrived yesterday and have not sailed for four months. We had a quick sail for an hour yesterday. It is nice to be back in the boat and the conditions were beautiful, not too physical. Ben and I have been mates for a long time but we are just learning how it works in the boat together. We will just try to enjoy the week and to learn and hope Katie gets better soon,” Boniface explained.

“It was so tough, very shifty with light winds,” said Peponnet, “We have a good sensation on the boat even if we have trained in stronger breezes through the winter. So that is pleasing. The last two days have been good in practice so we feel good. We are liking the light breeze.”

Mion lifted the 470 European Championship on these Bay of Palma waters two years ago and won this regatta with Nicolas Charbonnier in 2011.

In the 470 Women Switzerland's Linda Fahrni and Maja Sigenthaler who finished fourth here last year open their Sofia campaign with the regatta lead, thanks to a third and a second place.

“It was difficult, shifty and  moving around a lot but we had a good start and lead early on the first race, second race was not so good. But it is the first day. Our aim is just to get to the Medal Race and see how we can do. We are looking mainly to getting the nation qualified at the world championships in Aarhus.” helm Fahrini commented.

Reigning gold medallist GIles Scott (GBR) was pleased to have 'survived' what proved to be a pretty marginal first day of racing in the tough Finn class, coming away with a solid sixth and ninth to lie second two points behind Spain's Alejandro Muscat.

“Surviving is the word. We had surprisngly windy conditions from the north when we went out but knew it would do the big swing which it did. So from two reasaonably light races, the second one was especially difficult with big shifts and a big pin end biased line. We just got done before the wind shut off completely,” Scott explained,

“This is my second event after Miami and I'll go to Hyeres and to Marseille and then Aarhus. Here I am just working on things, little specifics. Events like this are great to work on what you think might be your next gain and then come back to the fleet. That is how the majority of the fleet operate and so why events this are so popular.”

Scott adds: “It is pretty difficult because I am juggling a few balls at the moment. I think it is good for me as long as my time management is good and I am putting all the hours in that I can. I enjoy to stay busy and stay fresh and to keep learning in other areas of the sport. The difficulty is in just managing your time commitment. It is refreshing to be back racing on your own. It is so different and this class is so tactical. You have to be on every decision you make in Finn racing, you just don't get away with mistakes.”

Meech reported, ” It was hard racing, a real eyes out of the boat day looking for the best pressure. We had pretty good starts which is good because we have been working hard on them.  And I think we were good at staying calm today, being patient. We have come here after a really good summer at home in New Zealand. We had a good break and then our 49er fleet have been there and some of the international girls came down – the Norwegian girls and the Australians came across for our local regattas so that was god for us. And then the announcement we will get the World Championships in New Zealand next year added a really cool buzz to things down there.”