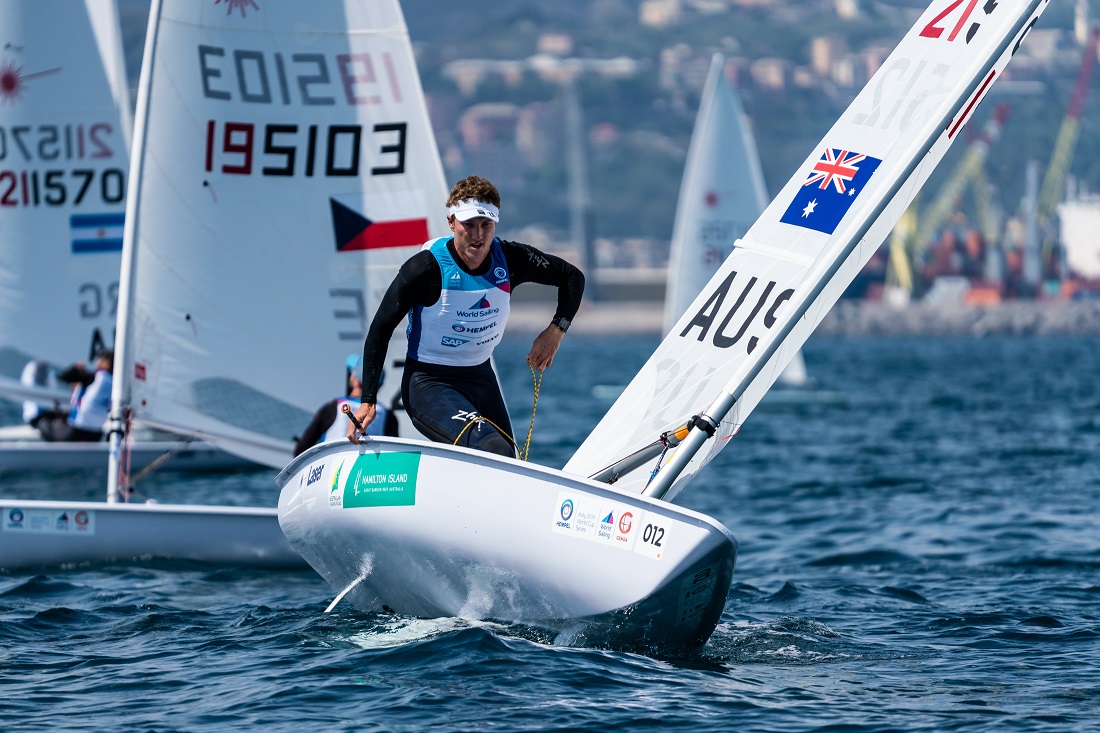 A difficult day for sailors and race officials alike at the Hempel World Cup Series – Round 3, Genoa, as the wind gods offered up the minimum breeze, meaning very few races were held and racing cancelled for the day in most classes, including the 49er, Laser Radial and 470 Men’s and Women’s.

For those in the Australian Team, only the 49erFX skiff and Laser got off the beach, for just one race each. Only the Blue group in the FX sailed, where all three Australian teams were. The Yellow group missed out, and as such, are one race behind the Blue fleet’s three races. It leaves the overall standings in limbo.

A whisper of breeze on all course areas caused long delays before racing did get underway. The AST’s 49erFX coach, Tessa Parkinson, herself an Olympic 2008 gold medallist in the 470 class, described the conditions as the fleet made its way to the top mark: “A stable 4 to 5 knots from the south. It was a boat speed race.” she said.

Natasha Bryant and Annie Wilmot were the best of the three teams, finishing sixth from the 26 teams. Tess Lloyd and Jaime Ryan placed 10th, while Amelia Stabback and Caitlin Elks were unfortunately scored UFD (disqualified) for prematurely starting.

“Race officers have a tough job this week and they had a very tough job today,” Tess Lloyd conceded.

“All week the weather has been quite marginal here in Genoa. Today we finally started in 5 to 6 knots, but it went down to 3 knots. It’s hard for officials to get racing in and to keep it going. It’s hard for the sailors too. The aim was for three races per day. To complete the qualifying round, four races is the minimum,” the Victorian sailor explained.

As far as her and Ryan’s Olympic campaign for the 2020 Tokyo Olympic Games is concerned, Lloyd said, “We are on track. Obviously we are quite a new team (they have sailed together for one year) and the class is new for Jaime. She is still wrapping her head around it.”

Ryan made her Olympic debut in the 470 Women’s at the 2016 Rio Games and finished 15th, while her brother Will won Silver with Mat Belcher in the 470 Men’s. He is also in Genoa, but the 470s are yet to race.

“Every day we are building as a team together. We’re trying to get things together here in Europe after training in Sydney, which we did all summer. We raced at Sail Sydney and then Sail Melbourne, before going to Miami in January. It was a good period of summer training,” she said.

“Working as a squad with the two other teams, we are pushing each other and helping each other to be the best in the world. Australia having three good boats is going to make it easier to get there (the top of the class and the Olympics) than just one boat doing it alone.”

Going back to the day’s race, Lloyd explained the intricacies of sailing in next to no breeze: “It requires a lot of skills and using your body weight in the right way. The Europeans train a lot in these conditions, as this is what they mainly get. Each little mistake is more painful and costly than it was say, a year ago, because everyone has improved so much.”

Luke Elliott has broken away from training with the other Australian Laser sailors to compete in Genoa. With the fleet split into two, he is in fifth overall after finishing third in his group.