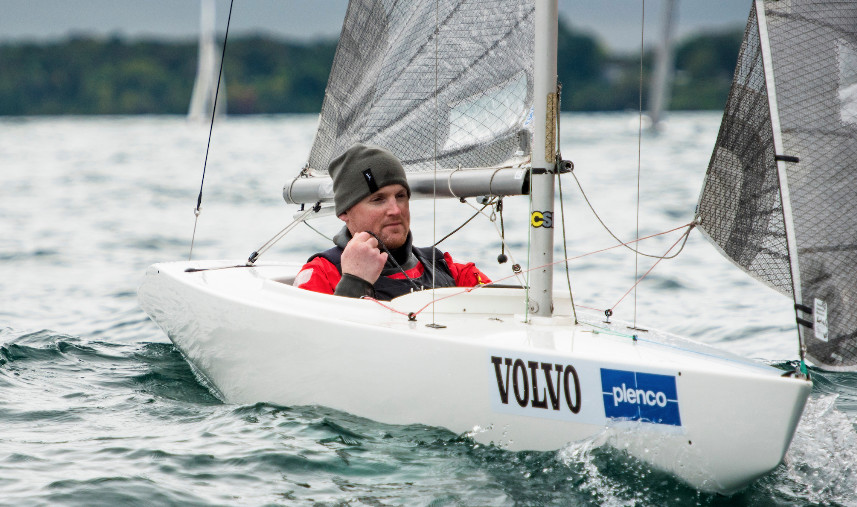 Light breeze coupled with choppy waves on Lake Michigan resulted in a tough day for the 98 competitors from 39 nations racing at the Para World Sailing Championships in Sheboygan, Wisconsin, USA.

Waves between two to four feet and a breeze that varied from 4-8 knots resulted in a tough challenge for all involved – but the conditions allowed for racing. The leaderboards in the 2.4 Norlin OD and the Women’s Hansa 303 evolved, Gian Bachisio Pira and Gialuca Raggi (ITA) qualified for the RS Venture Connect final and gold fleet racing started in the Men’s Hansa 303.

Just one race was completed on Thursday and Seguin was able to win it, which promoted him back into the lead he lost the day prior to Bugg. The Australian came through in third and is one point off Seguin. Smith finished second in the sixth race of the series and is in third, one point off Bugg.

“It was really tricky today,” explained Bugg on the day’s conditions. “There was not a lot of wind and quite a large sea state.

“It was really hard to keep the boat going and pretty much after the start it was a bit of a procession out to the right and up to the top mark. It was hard to make up places once you had your number in the procession.”

On Wednesday, three races were completed and Bugg won two and took a second. This pushed him firmly into contention after a slow start. “Yesterday was great. The boat felt really fast. I was very happy with getting out of the start cleanly and being able to tack when I wanted to. As soon as things cleared out after the start I could keep the boat going fast and go wherever I wanted to go and keep it close to the leaders. I took the opportunity to pass when it presented itself.”

Three races are scheduled for Friday ahead of Saturday’s Medal Race and Bugg is excited about the prospect of the double-points decider, “The Medal Race will be great. It’s good in the Olympics, it doubles the importance and makes every decision twice as important. I like the high-pressure scenarios.”

Germany’s Heiko Kroger is in fourth, 14-points off Seguin.

After two qualifying days in the Men’s Hansa 303, the top 17 competitors advanced to the gold fleet. The results from the qualification days no longer count so effectively the competitors were starting from scratch.

Olga Górnas-Grudzien (POL) retained and extended her lead in the Women’s Hansa 303 even though she was across the line early in the opening race of the day. The Polish racer discarded her tenth for being OCS and then hit back with a race win to end the day ten points clear of Violeta del Reino (ESP).

Will Street and Jonathan Currell (GBR) will join Alexandra Rickham and Hannah Stodel (GBR) and John McRoberts and Scott Lutes (CAN) in the winner-take-all RS Venture Connect final.

The British team protested Italy's Gian Bachisio Pira and Gialuca Raggi (ITA) at the end of the day and the Italians were adjudged to have broken the rules which saw them drop from top spot.

The Italians and three other teams will have one final chance to qualify for the final on Friday.

Friday will be the penultimate day of the competition and racing is scheduled to start at 10:00 local time.