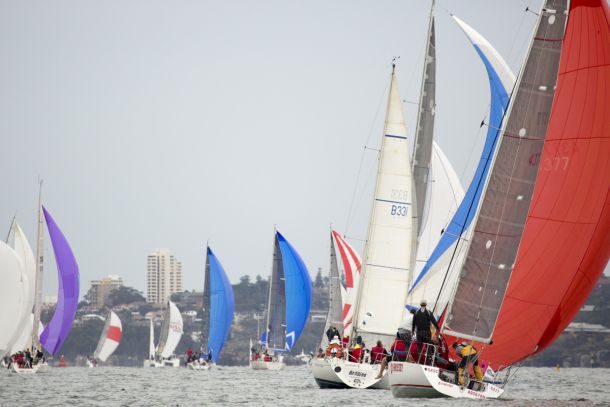 Due to a forecast malfunction, Principal Race Officer Ms Robyn Morton was forced to shorten the course for Race 6 of the Cruising Yacht Club of Australia’s Land Rover Winter Series today.

“The forecast was for a nice 10 knot westerly, and while the breeze stayed in the west, it was generally 5-8 knots and petered out to around 3 knots at times. It never reached the predicted wind speed, so we shorted the course once each division got through the gate for the first time,” Morton said. “Most of the 105 boats that started had at least one and a half hours of sailing, which isn’t much, but I thought it would be nasty to send them around the course again, given the situation. They could have been out there for a long, long time,” she added.

Those who benefitted from the shorter race included Darryl Hodgkinson, who sailed his Cookson 50 Victoire to a near two minute win over Paul Clitheroe’s TP52 Balance in Division A1.

Both will be contesting the Land Rover Sydney Gold Coast Yacht Race at the end of July and are enjoying the friendly pre-Gold Coast rivalry as they check each other’s weekly performances out.

Messenger was in town for CYCA director Tony Kirby’s wedding yesterday and was looking forward to relieving his cousin Peter Messenger from helming duties, but at the last minute could not make it.

Only last evening, Messenger, whose company sponsors the CYCA’s annual Marinassess Women’s Match Racing Regatta, was complaining on being handicapped out of contention and felt he should be given an age allowance. “I’m 72 and I’m giving all those young guys a big head start on handicap – I can’t win under those circumstances,” he said laughing.

So it was that Peter took the reins again, admitting of their win this afternoon: “We got very lucky. On the first leg we went a slightly different way to the rest of the yachts in our division, which helped. Later some of them fell into a hole and Huntress was gassed by Triton (a Division A1 yacht) allowing us to sail over the top of them.

“It’s hard to beat the others in our division with our handicap, because we all sail at the same speed, so as I said, there was a lot of luck and our win was by under a minute on corrected time,” said the steerer who confirmed that the breeze fell flat at times during the race.

James Cameron scored his first triumph of the Series after winning Division F with his ‘pocket rocket’ Luna Sea, a Hick 35.

“We finally did it,” a relieved Cameron said. “We’ve been trying so hard, but our handicap has been tough. It came down a little this week and gave us an opportunity. I think being able to hold our kite all the way from Shark Island to the bottom mark, when others were unable to carry theirs all the way, gave us a slight edge.”

Cameron said conditions were not straight forward. “The breeze had its moments. Generally it was 5-8 knots, but it dropped at times, and at one stage was just two and a half knots,” he explained.

“This series is certainly good preparation for the upcoming offshore season and for the fact I have some new crew. We’re enjoying ourselves and it was also enjoyable beating our division leader, Double Trouble,” he said of Steve Wyatt’s Bavaria 35 Match, which has a solid six point advantage over Greg Mason and Barb Maunsell’s Sinewave.

Race 6 of the 10-race pointscore series which concludes on July 5, was sailed in cold and overcast conditions on Sydney Harbour, but the weather did not dampen the enthusiasm of competitors, most of whom were enjoying a few well-earned drinks back at the CYCA this afternoon.

Weekly prizes are awarded to the top three placegetters in each division and include exclusive CYCA Land Rover Winter Series merchandise. A lucky division winner is drawn each Sunday to receive a Land Rover Range Rover Evoque experience for a week. This time it was Adrian Abbott (Kirribilli), who scored his second win of the Series to lead Division A2 by one point.

Next Sunday, June 7, the second of three races in the Ladies Day Series will be held.