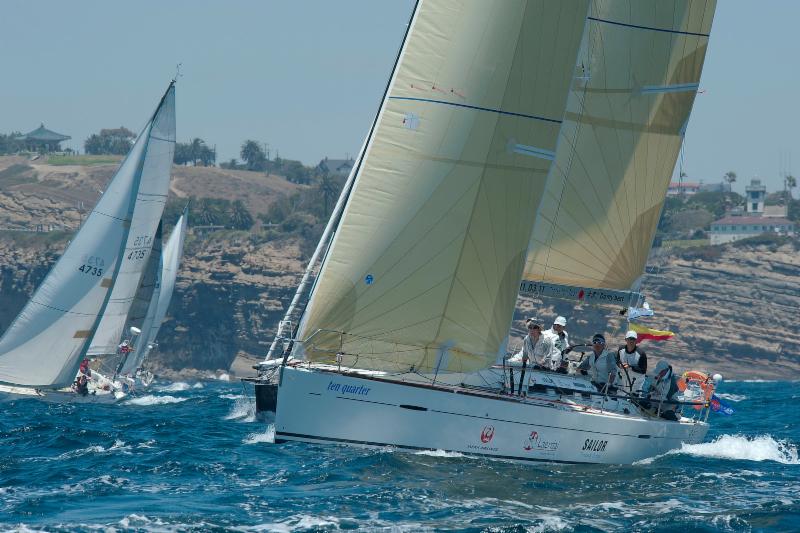 LOS ANGELES, CA – The first wave of three starts to the 49th edition of the 2017 biennial Transpac Race starts next Monday, July 3rd, when 17 yachts in three monohull divisions will cross the line at Point Fermin in Los Angeles to race to the finish at Diamond Head in Honolulu 2225 miles away. In addition, one yacht in the multihull division – Jerzy Poprawski's catamaran Kastor Pollux – will make the start this day as well.

The starting gun will fire at 1:00 PM Pacific time, with the first (and only) mark of the course being to leave the West End of Catalina Island to port, 26 miles away. From there its over the horizon for a journey that could take some as long as 2 weeks, others as short as a few days depending on weather and size and speed of their boats.

Those that start on Monday will be the slowest boats in the fleet of 55 entries, with faster boats starting in another wave on Wednesday, July 5th and the fastest starting on Thursday July 6th, all at 1:00 PM except for the Multihulls on Thursday starting at 1:30.

Prior to the first start, organizers at the Transpacific Yacht Club have several pre-race events planned:

– On Thursday evening July 29th a VIP mixer open to race participants and invited guests will be hosted by Farmers & Merchants Bank, featuring a presentation made by noted designers Morelli & Melvin Design and Engineering on the latest in multihull technology…a fitting discussion given yesterday's exciting conclusion of the America's Cup.

– On Saturday July 1st teams will pick up their registration materials and attend the Skippers Meeting for final instructions for the race.

– After the Skipper's Meeting, Gladstone's of Long Beach will once again be hosting the TransPac Aloha Party. The activities will commence at 1800 at the Bandshell next to the restaurant. Teams will be introduced and will receive the traditional Hawaiian blessing for safe travels and 'fair winds and following seas.' Tickets are available for order at https://2017.transpacyc.com/forms/send-off-party.

– From 11:00 AM – 4:00 PM on Sunday, July 2nd Circle Porsche is hosting Porsche Palooza, a fun day featuring test drives, new models from Porsche, and an impressive collection of 50 vintage models as well. Food, music, and many of the boats participating in Transpac will also be on display. The event is open to the public and is being held at Gladstone's and the Pine Street Pier in Long Beach.

– Unless called to duty, the Long Beach Fire Department will give a water show display for boats heading out to the start area in celebration of the fleet. Each boat will also be given a cannon salute as they leave Rainbow Harbor and be escorted out of the harbor by Hawaiian outrigger canoes.

“We're very excited about this year's fleet doing the race,” said TPYC Commodore Bo Wheeler. “We have a great mix of traditional and modern boats, those who are doing this for the first time and those who are seasoned veterans, and those doing the race for fun and those who are seriously in search of course records and putting their names in the history books alongside other prominent ocean sailors from around the world. This diversity is what makes this a great race.”

From on land the start may be seen from a cliff-top view at the historic lighthouse at Point Fermin Park in San Pedro.