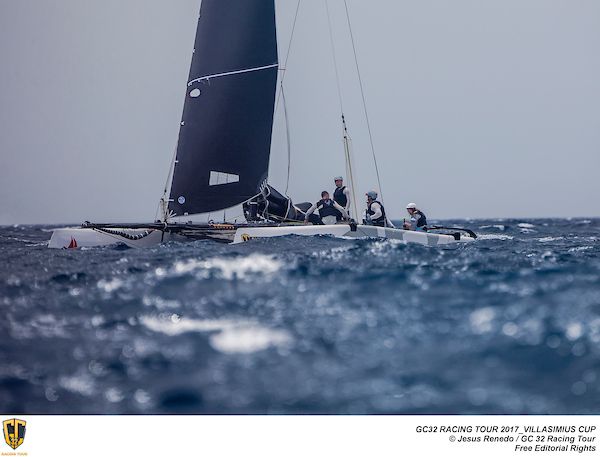 Big wind and big waves put paid to any hope of holding racing on day one at the GC32 Villasimius Cup in Southern Sardinia today. The second stage of the 2017 GC32 Racing Tour is a very different venue to the flat-water of Lake Garda where the first round took place last month.

The Marina di Villasimius is situated on a peninsula that lies in a north-south axis, with Capo Carbonara being the south-eastern corner of Sardinia. Principal race officer Stuart Childerley explained his strategy: “I was hoping to take the fleet around the Cape and to the eastern side of the peninsula to try to get some relief from the waves that built throughout the afternoon. However, some of the gusts were up to 31 knots and there was no real escape from the waves, so we were forced to call off racing for the day.”

Boris Hermann, crewing on board Malizia – Yacht Club de Monaco, fully understood the reasons for not risking racing, with the crew having suffered a few injuries during training, including to skipper Pierre Casiraghi on Tuesday. “Pierre was thrown forwards when the boat came to a big stop, and he hurt his back,” said Hermann, although today Casiraghi has looked almost back to full fitness. “We’re enjoying the place. I think Monday – when the wind was blowing from the north and the water was flat – that was my best day ever on a GC32. The water temperature is amazing, really nice warm wind, and remarkable hospitality here.”

The weather forecast for Thursday also looks touch and go, so the race officer has more difficult decisions to come. Armin Strom’s skipper and president of the GC32 class, Flavio Marazzi, commented: “We’ve raced at events with waves up to 1.5 metres, the boats are fun to sail, but you can’t push it to the limit. The fine line between crashing the boat and going as fast as you can, that will be the key to winning.”

Earlier in the morning, Iker Martinez, Olympic gold medallist and Volvo Ocean Race skipper, hosted ‘GC32 for Kids’. The skipper of Movistar-Ventana Group met up with some children from the local area and showed them around the boat and explained what he and his crew do when they go racing these high-speed thrill machines. “We had kids from the Valtur Tanka resort and the local sailing club, Lega Navale Italiana Sezione Villasimius,” said Martinez. “When you’re passionate about what you do, it’s always fun to share those experiences, particularly with kids.”

This evening the crews will enjoy some fine local food and wine from this spectacular corner of Sardinia. And they’ll be keeping their fingers crossed for a change of sailing conditions on Thursday.