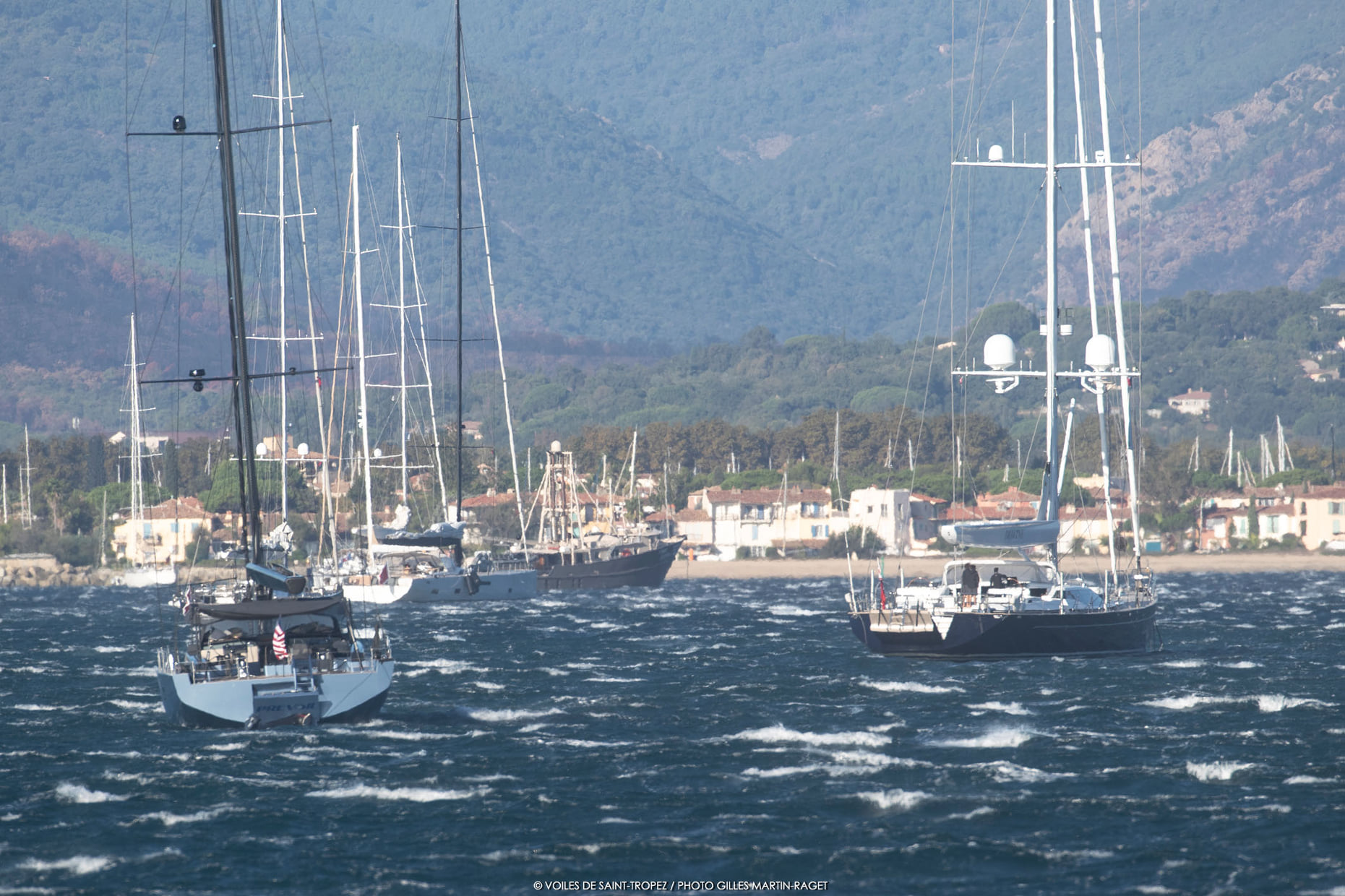 Powerful winds on Wednesday, with 42 knots (gusts up to 50 knots) recorded in the bay, meant that the 45 Maxi Yachts competing in the second week of Les Voiles de Saint Tropez regatta remained tucked away in the harbour.

Following yesterday’s exceptional racing, there were a number of competitors who were not averse to the prospect of being able to enjoy a brief interlude with the Mediterranean providing the perfect backdrop. Inevitably, they have plenty of repairs to busy themselves with as a result of the intense sailing in the bay breeze.

Battle is set to resume on Thursday. An in-house Mini championship for the Wally 6 fleet is scheduled.

The latest on the racing

Following the totting up of the handicaps, the rankings in corrected time provide a wonderful snapshot of yesterday’s spectacular day of racing and a chance to really take notice of the ‘opposing armies’ in each of the groups, even if the strong breeze has creamed off the best of the smallest groups a little. Indeed, the Mini Maxis measuring 60 to 80 feet and grouped into IRC 4 have only managed to rank one of their races so far as the gusts of more than 30 knots convinced the majority of the contenders to wisely head back to port.

It’s Elise Whisper, the Irish Southern Wind 77 which secured a much-deserved victory as the only one in her group to complete the entire 36.5-mile course. Meantime, there was a battle royal in IR3B, dominated by the Mylius 80 Twin Soul in elapsed time. Though the ultimate victory went to the Wally 80 Lyra once the measurement was calculated. Jethou went one better, taking the win in IR3 A in both elapsed and corrected time.

In IRC2, the J Class Topaz spent the whole day playing around with the Maxis in IRC 1. She takes the lead in IRC 2 ahead of the large sloop (33 metres) Silvertip (Dubois 2001). Suffice to say that the 45 Maxis are eagerly awaiting tomorrow’s action when a lighter and flukier breezier is forecast to reshuffle the cards for one and all.

Six Wally Yachts with very different designs are racing at Les Voiles in a variety of groups. Indeed, Lyra (Wally 77), Ryokan (Wally 80) and Rose (Wally 80) are sailing in IRC 3B, Green Eyes (Wally 107) in IRC2, whilst Magic Carpet Cubed (Wally Cento) and Y3K (Wally 100) are in IRC1.

As a result, a formula has been devised to award points to each yacht at the end of each race, taking into account the ranking of each boat in their respective groups, independently of the courses and ratings. In this way, yesterday’s race saw Lyra take pole position, ahead of Ryokan and Magic Carpet Cubed. The boat that places highest at the end of Saturday’s racing will receive the one and only Wally Trophy.

Twenty-four-year-old Robin Follin lives in nearby Sainte Maxime. With seven world champion titles to his credit, he is a top-flight helmsman. He steered the first French boat to compete in the Youth America’s Cup, flying the flag of the Yacht Club de France.

He currently divides his time between offshore racing with the preparation of his second Solitaire du Figaro campaign and sailing on a multitude of foiling craft. This week he’s sailing aboard the giant, Wally Cento Magic Carpet Cubed, with a crew of international stars.

“It’s a very special experience and one that’s very different to what I usually do in terms of my role aboard and my understanding of the boat,” said Follin. “It’s very interesting to make by debut on this circuit and on this type of boat. Group synergy on a boat like this is super important. You need to understand how it works and the roles of each person.

“The crew is entirely Anglo-Saxon, so the language barrier also comes into play for me. It’s magical though. Yesterday, I was really starry-eyed! Neck and neck with Rambler and Comanche… I was knackered by the evening! It’s just a riot. We sailed to Le Lavandou and back in 4 hours! It’s incredible! What power, what a feeling!

“ The boats are magnificent and you have to be very careful and take into account a great many factors. I think sailing on these big boats is an absolute must in every sailor’s career and it helps us to step up our game in other aspects of the profession. There are 28 of us aboard Magic Carpet, so the synergies, the communication and the anticipation are completely different to what we do in other types of sailing.

“You have to know how to adapt. You also need to know how to prove yourself and stand out because this kind of sailing is an elite sport and places aboard are few and far between. That’s part and parcel of the journey you undertake as a sailor. Finding a niche for yourself here is how you shape a career.”

For the full results, see: http://www.lesvoilesdesaint-tropez.fr/regates/resultats-vdst/