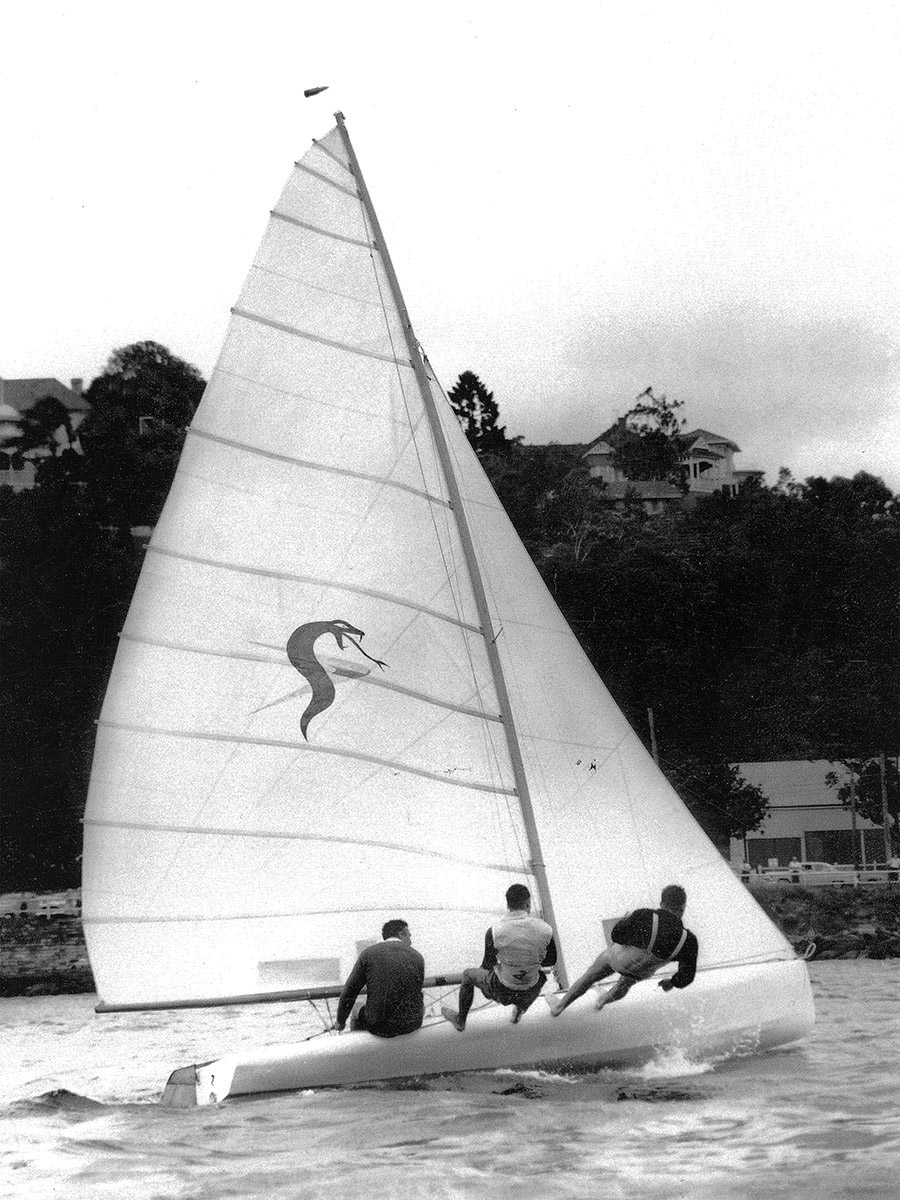 Brisbane led the way in the transition from the four-handed 18ft Skiffs to the three-handers in the late 1950s, but it was the late Len Heffernan who took up the challenge to introduce the new style boats to Sydney, when the local clubs initially refused to accept their registration.

Heffernan, who was a designer and builder as well as a champion skipper, saw the potential of the Bob Miller (later known as Ben Lexcen) light three-hander concept and was determined to get the new style boats racing in Sydney.

The 18s of the 1950s were large-hulled, big sail-area carriers manned by crews of five or six.  The new, smaller, lighter three-handers with moderate sail areas could plane upwind.

Heffernan later recalled, “that (Miller’s) boat was so fast on the wind, that's what sold me on the three-handers, but the spinnakers were too small.  In very light conditions, we were too fast downwind for it on the Brisbane River.”

Miller took Taipan to Auckland in 1960 for the Giltinan Championship but delegates made him cut big holes in the foredeck and side decks to meet the class definition of an 'open boat.

Heffernan tried to get the Sydney Flying Squadron to allow three-handers to race with the club, but many members wanted to retain the 'open boat' spirit of the older 18s, with their massive sail plans and large crews, and strongly resisted the move.

With the four-handed, Jantzen Girl 6, Heffernan won the first heat of the 1961 JJs on the Brisbane River but Miller, who had ‘corrected’ the Taipan design when he built Venom, easily won the title.

Back in Sydney, Heffernan finally got the three-handers accepted by the SFS.  Unfortunately it was September which was too late for him to build one for the new season.  He decided to go to Brisbane and bought Taipan which he re-named Crystal Lad and, with new sails, easily won the 1961-1962 Australian Championship in Cairns, NQ.

Heffernan spent nearly 12 months building six three-handers to the Taipan/Venom style and got the ‘new boat’ going in Sydney.  He won two of his five Australian Championship victories in one of them, Aberdare.

The boats were cold-moulded with two skins of cedar angled at about 45 degrees.  They had a plywood floor and, unlike the hard-chined Taipan, were round-bilged, mainly for appearance.

As well as his 1958 Giltinan victory, Heffernan won five Australian championships between 1958 and 1964.

Another champion in the early 1960s was Ken Beashel, who preferred the 16 Footers, but also starred as a two-time winner of the JJ Giltinan world 18ft Skiff Championship in the 1960s.

Ken, son of the long-time League Secretary Alf Beashel, was a very successful designer, builder and competitor in the 16s, and won the Australian 16 Footer Championship in 1961-1962.

His success in the 16s naturally drew offers to join the 18ft Skiff fleet at the League.  Although reluctant at first, Ken finally accepted an offer to sail the Len Heffernan-built Schemer and won the 1963 Giltinan Championship in Auckland.

Beashel later told famed Australian yachting journalist, Bob Ross, “we had three wins in five races and I think we could have won every race we sailed in that boat, but sometimes we missed tacks.”

An incredible incident occurred during Race 3 of the championship when a RNZAF launch, carrying a TV cameraman, and Schemer collided while Schemer was holding an almost unbeatable lead.

Beashel managed to climb aboard the launch for a short, effective visit.  He recalled, “I managed to climb up the stem and got on board.  I told him what I thought of him with my hands, then jumped back into the water to check my damaged boat.”

The following season Beashel returned to designing, building and sailing 16s, but just before the 1964 JJs, boat owner Benny Walsh persuaded him to sail Schemer again.  Without his full crew and no preparation, he was runner-up to Cliff Monkhouse, in a new boat named Toogara.

Beashel crewed aboard Sir Frank Packer's Gretel in the selection series for the 1967 America's Cup and, through that association, persuaded Sir Frank to sponsor a new 18 Footer, Daily Telegraph, to contest the 1968 Giltinan Championship in Auckland.

He designed 'Daily Telegraph' with a finer hull to handle the bumpy tidal chop on Auckland’s Waitemata Harbour, a lesson he learned with Schemer in 1963.  It was a winner for Beashel as Daily Telegraph scored three wins and two seconds in the five-race series.

It was the last international or national 18 Footer win for either Len Heffernan or Ken Beashel.