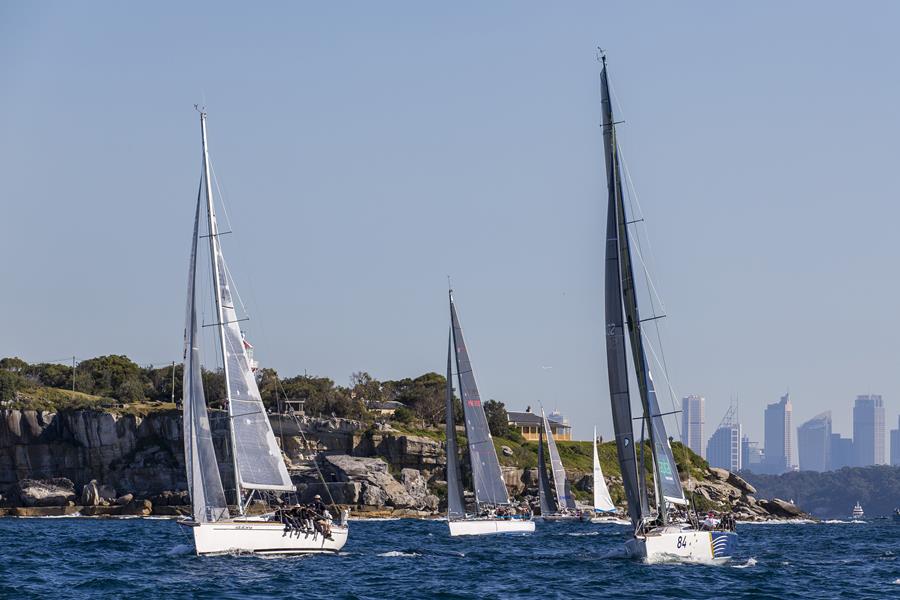 Noakes Sydney Gold Coast Yacht Race handicap fortunes look set to favour the mid-size boats in the 384 nautical mile run north to Southport, a light-wind start and first 24 hours then a 20-25 knot southerly change on Sunday to close-up the gap on the bigger bolters.

Wild Oats XI’s 2012 course record of 22 hours 33 minutes 46 minutes is safe for another year though the wrestle for the line honours trophy will be the most intense in race history with four 100-footers vying – Comanche (Jim Cooney and Samantha Grant), Black Jack (Peter Harburg), InfoTrack (Christian Beck) and Wild Oats XI (Oatley family).

Black Jack’s navigator Tom Addis says though they are known as the light air specialist among the 100-footers, “even the fat 100s go upwind well in the light airs. It’s looking like an inshore race, not one you can get offshore into the current. I’m expecting we’ll all be doing similar things inshore and I’m sure it will be quite a tight finish.”

Bureau of Meteorology forecaster Gabrielle Woodhouse advised representatives of the 54 competing boats at Thursday’s official race briefing they can expect light and variable winter northerlies for the 1pm start on Saturday July 28 off Nielsen Park on the eastern shoreline of Sydney Harbour.

Out to sea during Saturday afternoon and evening the fleet is looking at north to north-easterly winds 10-15 knots, potentially stronger well offshore. The chance of showers will increase later at night, with the risk of a thunderstorm.

Northerlies on Sunday July 29, 15-20 knots, should tend to the west before a change moves through the Hunter and Macquarie coasts in the afternoon and evening. By the time the change reaches the Coffs and Byron coasts on Sunday night, winds are predicted to have eased.

If the first half are really knocked by light winds then a 20-25kt west to south-westerly change sweeps up the New South Wales coast Sunday and into Monday, the mid-range challengers, including the TP52s and Voodoo, will seal victory in terms of the all-important corrected time trophies says Cruising Yacht Club of Australia sailing manager Justine Kirkjian.

Victorian yachtsman Hugh Ellis, skipper of the reborn RP63 Voodoo, believes the race conditions will suit his boat. “It looks pretty good for us; we should have a pretty fast race if we can dodge the light stuff. The main thing is we aren’t going to get our ears boxed.”

Anthony Kirke, owner/skipper of the modified and “over-capitalised” Western Australian Farr 40 called Enterprise believes the forecast is looking a lot better for the 40-footers, whereas earlier in the week it played into the downwind flyers’ hands. “If we get a bit of light and upwind it’s much better suited to some of the conventional 40-footers,” said Kirke just prior to the race briefing, as the final pieces of his boat were put in place following a lengthy truck ride from WA across the Nullarbor.

New to the offshore arena is TP52 Gweilo, which is Cantonese slang for white man or westerner, originally born as Container in 2011 and last sailed in Australia as one of the late Jason van der Slot’s TP52s called Calm. Owners Matt Donald and Chris Townsend have assembled a top-notch team led by Mike Green for the CYCA boat’s first hit-out on their march towards this year’s Rolex Sydney Hobart Yacht Race. “It seems to have the pedigree; we’ll see if we can make it do the numbers,” Green commented.

Gweilo’s navigator Richard Grimes predicts “we’ll only see a few hours of a spinnaker, towards the end. It’s all jibs and reaching gear so our ETA is pushing out to two days.”

Five Australian states are represented on the list of  entries for the 33rd edition of the bluewater race that signals the 2018-19 offshore season open. Southport Yacht Club in Queensland is the CYCA’s finish partner.