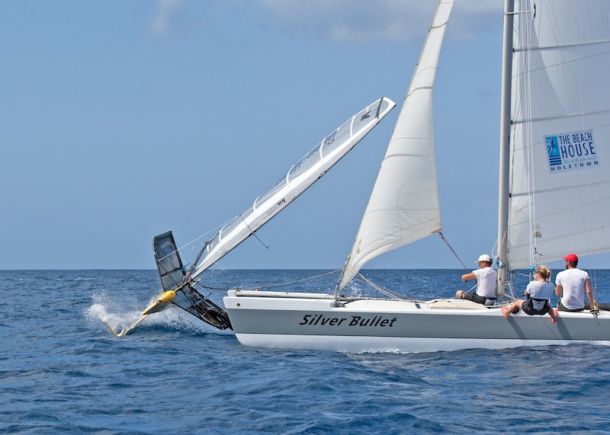 Bridgetown, Barbados (18 January, 2015): After two days of racing in the Mount Gay Round Barbados Race Coastal Series, leading contenders for the overall honours are beginning to emerge.

Racing for most classes began with a circuit of Carlisle Bay before heading on an eight-mile leg up the west coast and then out south. Although the wind was lighter, it was shifty, which meant the emphasis was on good tactics and impeccable team work.

The J/24 fleet always produces surprises and today was no exception. Team Shakin with Peter Armstrong at the helm had a repeat performance of yesterday’s first race when they led off the start. Today however, they sailed consistently well in the first race with a good start and first beat, and led the race from the top mark to the finish.

Chatting about the team’s performance, Armstrong said: “We learnt a lesson from yesterday so today we covered the fleet and finished with a comfortable lead. This is all good for us because we are usually at the other end of the fleet. Our secret weapon is our new tactician – Kwame Hinds – who is also our coach. We also have new North sails, so we have everything going for us. We are really pleased with our performance because we have seen a massive improvement.”

Raphael Grisoni and his Bunga Bunga team won the second race of the day, while the young team on College Funds won the third. With three seconds from today to add to yesterday’s three firsts, however, Robert Povey and team on Hawkeye remain at the top of the rankings with just two races remaining.

The big boat CSA Racing class enjoyed a good course with a long tight reach, which for many was too shy to fly a kite. Conviction – the local TP52 – sailed by Paul Johnson, Clint Brooks and team representing the Barbados Offshore Sailing Syndicate (BOSS), a local project that promotes youth in sailing, were on form today and managed to bag their first ever regatta win. They are now lying in joint first place with the charter boat Lancelot II – Chris Jackson’s Slovakian team – who won the opening race yesterday.

Brooks said: “We made few tweaks with the boat and the rig today. That combined with the shorter course and the team’s extra hard work we managed a great performance. As yesterday was our first ever day of competition we did make a mistake or two – but we all learned from that.”

Their closest rivals today were the Lithuanian team on the VO60 Ambersail who finished second on corrected time. Raimundas Daubaras and his team, who arrived with their boat in Barbados last week, have soon slotted into race mode and will be looking to repeat or improve their performance tomorrow, in preparation for Wednesday’s Mount Gay Rum Round Barbados Race.

Racing was close once again in CSA Cruising class between Mike Krimholtz and team on Dragon Magic (Dufour), David Spieler on Leonora (Beneteau Oceanis 473), and Ian Hickling on Ten Seven (Catalina). The team on Leonora however, sailed extremely well once again and today managed to pull out their second win of the series.

Team Leonora is now almost unbeatable will be out again tomorrow racing hard. Spieler chatting this afternoon, said: “ We are thrilled to have scored two firsts in this regatta. The team worked hard and the conditions out there today were magical. We particularly enjoyed heading out to sea to Mark 5. It was awesome out there, and we all felt on top of the world. Although we have the series virtually sewn up, we’ll be sailing the best we can gain tomorrow because it is so enjoyable.”

The well-supported Non-CSA class enjoyed close, exciting racing once again. Richard Inniss and team on Other Business (Beneteau Idylle 51), who finished third yesterday, took a well-deserved win today, which puts them on equal points at the top of the fleet with Bruce Robinson’s Mandy (Hunter 30).

One of the biggest attractions/distractions out on the racecourse pre-start this week is the Andy Budgen’s International Moth – Nano Project. Budgen who is in Barbados to defend the Round Barbados record on the VO70 Monster Project on Wednesday, had is Mach 2 foiling Moth shipped out from the UK last week and is racing within the Multihull/Windsurfer class. So far he has yet to finish a race but he has provided plenty of entertainment on the water.

This class has produced joint leaders. Buccaroo (Stiletto) sailed by Danny Paraviccino now has a third and a win in today’s race, while Charles Hunt, the sole windsurfer, has a first place from yesterday and a third today, leaving them both with four points. After having to retire yesterday with boat damage, Bryn Palmer and team on Silver Bullet (RC30) were on form today, and took second place, which leaves them third overall.

Tomorrow’s forecast shows similar conditions with a maximum of 14-15kts from the east-north-east. It will however, remain shifty.

Back on shore, the Bajan party scene is bigger than ever with crews heading to the stylish Drift Ocean Terrace Lounge at Holetown tonight for live music, and then back to Barbados Yacht Club on Monday night for more fine local hospitality.