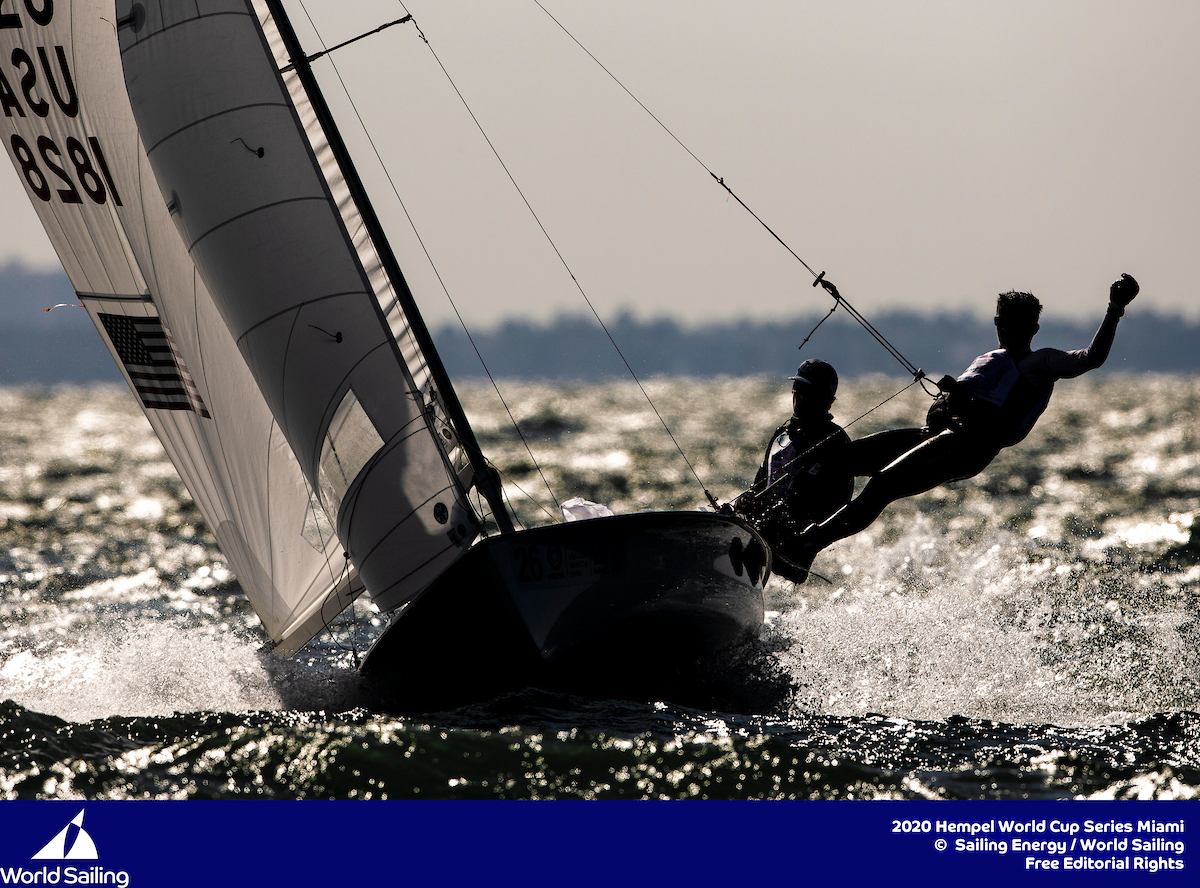 By Jake Fish – US Sailing

Sailors were greeted with cooler temperatures, sunny skies, and plenty of breeze on the second day of the 2020 Hempel World Cup Series Miami, USA.

On Tuesday, the 470 Men and Women, Laser, Laser Radial, and Finn fleets completed two races, while the RS:X Men and Women finished three. Tuesday marked the second of five days of fleet racing leading up to Saturday’s all-important Medal Races, which will be broadcast live on World Sailing’s YouTube Channel.

World Cup Miami, the second stop on the 2020 Series, is the final opportunity for North American nations to qualify for the 2020 Games in all seven classes and the 182 sailors from 45 nations are also competing this week for advancement in the World Cup standings.

Tuesday’s weather was mostly sunny with temperatures in the early 20s. Wind speeds this morning were 12-16 knots, including gusts up to 20 knots. Conditions in the afternoon were more shifty and puffy with an increase in breeze.

The Laser is the largest fleet in Miami with 49 registered sailors. A single North American spot remains available to sailors and competitors from Antigua, Aruba, Barbados, Bermuda, Canada, Cayman Islands, US Virgin Islands, St. Lucia, Mexico and Trinidad and Tobago will be on the start line.

Canada has 12 Laser representatives, while Mexico has four and Antigua two. One of the favourites to book his nation’s spot in Tokyo 2020 is Trinidad and Tobago’s Andrew Lewis. The two-time Olympian secured his first ever Hempel World Cup Series medal in Genoa, Italy last season in a tough fleet.

Lewis is in third place through four races after finishing third and fifth today. He leads all North American sailors in the regatta standings. Lewis enjoys the Miami conditions and is excited to be here at the venue.

“This is just an amazing place to sail. I’ve been coming here for about ten years and Miami has a special place in my heart. It’s the closest place we race to at the highest levels in the Caribbean in my opinion.

“Today was super challenging. The pressure was filling in around the racecourse. I’m happy with my results today and I’m happy with how the regatta is going.”

Lewis remains focused on his sailing despite what is at stake this week. “It’s too early to be keeping eyes on the other sailors. I’m consistently focused on staying as far in front of the fleet as possible.”

Only two spots behind Lewis in fifth place overall is Canada’s Robert Lewis, who posted a pair of fourth place finishes on Tuesday. Davis finished ahead of Lewis at the 2019 Pan Games.

“We had more offshore wind today, which made it more puffy, choppy and shifty,” said Lewis.

“You had to keep your head out of the boat and look for the wind. Most of the wind was coming off the shore to the left side, and I wasn’t quite punchy on that but still managed to get a couple decent scores today.”

Davis remains focused on being consistent throughout the week. “I think consistency is going to win here in Miami because it’s a soft and tricky venue, but at the same time it’s a relatively small fleet.

“If you are not trying to go for some of those obvious puffs and shifts on days like today, somebody else is going to go for them and I need those points.”

Joaquin Blanco (ESP) posted two bullets on Monday and has a lead on the Laser fleet, despite a BFD in Race 4 today. He was fifth in Race 3. Also, with seven points atop the leaderboard is Argentina’s Francisco Guaragna Rigonat.

The United States has a lead in the Laser Radial fleet, as Erika Reinke has performed well over the first two days in Miami. Reineke overtakes Monday’s leader Viktorija Andrulyte of Lithuania, with a second-place finish in Race 3 and a win in Race 4. Andrulyte is three points back.

Caleb Paine of the United States continues his dominance in the 14-boat Finn event. He has won three of four races and placed second in Race 3 today. He has a four-point lead over teammate Luke Muller, as the American selection process continues to make waves this week in Miami. Canada’s Kyle Martin is seven points back and in third place.

In the Women’s 470, Camille Lecointre and Aloise Retornaz of France have emerged as Tokyo 2020 medal favorites after they secured the 2019 Hempel World Cup Series title, gold at READY STEADY TOKYO and the 2019 European Championship. They have won three of the four races this week and lead the overall standings.

In second place is Poland’s Agnieszka Skrzypulec and Jolanta Ogar, who won Race 3. “We had a lot of fun on the water today,” said Skrzypulec. “We had a nice strong wind with a lot of shifts, so we had to be focused at all times.

“Yesterday, we struggled a bit in the second race, but today we started off with a fresh mindset and today was a new beginning with new wind conditions.”

The only nation in the running for the North American Tokyo 2020 spot in the Women’s 470 is the United States. The event also acts as an American team qualifier with Nikola Barnes and Lara Dallman-Weiss, Carmen and Emma Cowles as well as Atlantic and Nora Brugman. The Cowles are currently the top American team in eighth place overall. They placed fifth and eighth today and lead the Brugmans by four points. These young American tandems are gaining critical experience this week.

Over in the 30-boat Men’s 470 fleet, Anton Dahlberg and Fredrik Bergström of Sweden maintain their lead from Monday. They have a three-point edge over Panagiotis Mantis and Pavlos Kagialis of Greece. Stuart McNay and David Hughes are the top North American team in ninth overall.

In the Men’s RS:X, two nations are aiming to qualify for Tokyo 2020 – Dominican Republic and Mexico. The odds are stacked in Mexico’s favour, with five-time Olympian David Mier Y Teran and Ignacio Berenguer leading the charge. The Dominican Republic’s Samuel Perez Hults is also contending this week. In total, eight sailors are racing in the Men’s RS:X fleet and the event is also acting as an American qualifier for Tokyo 2020.

Pedro Pascual of the United States continues his lead over the fleet from Monday with seven points following three more races. He won the first race of the day and has collected three wins so far this week. Following in close pursuit of the lead is Berenguer and Teran, who are placing second and third respectively.

Nikola Girke (CAN) has made her competitive RS:X return in the 10-boat Women’s fleet. The Canadian represented her nation in the 470 at Athens 2004, the RS:X at Beijing 2008 and London 2012 and the Nacra 17 at Rio 2016. Canada is the only North American nation in the fleet who has not yet qualified and Girke will confirm the spot by completing the event. She is currently in sixth place.

“It’s my first time back on the RS:X after a couple years, so I’m trying to get my racing legs back,” said Girke.
“Having this regatta under my belt before World Championships is really important and I want to qualify my country for the Olympics. The real reason why I came back is to have fun.”

Mexico's Demita Vega de Lille and Mariana Aguilar have 11 points each and they lead the Women's RS:X fleet through six races. In third place is Farrah Hall, who won the final race of the day.