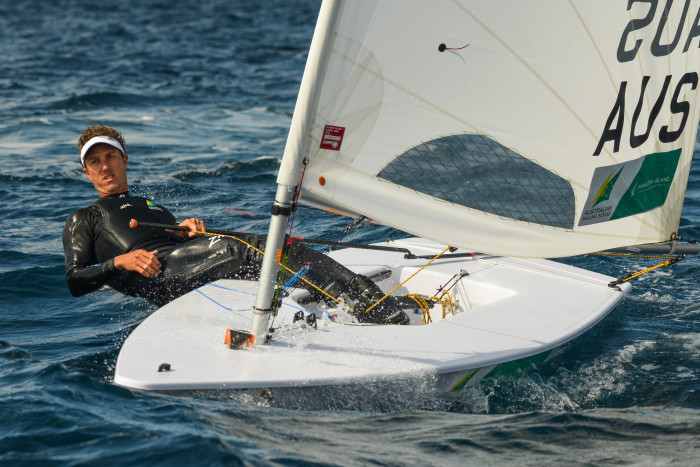 Italy’s Mattia Camboni looks closest in the Semaine Olympique Française fleets to being able to have a party on Friday before Saturday’s medal races, after extending his lead in the men’s RS:X. But another full day of racing in Hyères could have turned out very differently after he crashed with his countryman, Daniele Benedetti at the start of the second race.

Olympic sailing is a cut-throat business. The camaraderie in the boat park is extraordinary, particularly between countries, but because only one sailor in each class can represent their country at the Olympics it can test the relationships between friends, flatmates and countrymen to destruction. Australia’s Matt Wearn has talked about how pressure affected his relationship with Tom Burton, the Rio 2016 Olympic champion, and with the top three here all Australians, that is only increasing.

So it is hard not to read significance into every word, and especially deed on the water and when Camboni and Benedetti, who live in the same building in Civitavecchia on the coast near Rome, crashed, there was edge.

“Good day, the gap is bigger, it could have been better in the last race, but it could also have been much worse in the second – Daniele and I crashed,” Camboni said. Was it an accident? Camboni shrugged and laughed. “It’s OK, I didn’t fall, but I started last. He passed over me. But in the end I had a good race and came back to seventh.”

“I still have a good discard, nine is better than the second and third placed on the leaderboard. But three races you never know, you do one UFD, you push a little too much in the start, then everything open. I hope to have a good day tomorrow and then we’ll see if I can party one day before (the medal race) or if I get no party.”

It was a day of shifting winds if not always fortunes, starting with unstable 6-8 knot south-westerlies and building slightly and stabilising by the late afternoon. The forecast for Friday and Saturday is for 18-20 knot westerlies.

It may not have been Perth conditions again, but the Perth boys, Matt Wearn and Luke Elliott shared the honours again today, dominating the first day of gold fleet. Wearn tightened his grip at the top and Elliott moved past New Zealand’s Sam Meech into second, eight points behind. Racing in more stable conditions after the Laser Radial had finished, Elliot won the first ahead of Wearn, and then Wearn won the second.

Meech could not find any rhythm for the first day this week and finished 13th in both races. Tom Burton moved into third, two points ahead, but he too struggled in the first race, finishing 15th.

But with three races tomorrow, in what promise to be more Perth-like conditions, nothing is decided yet.

Matt Wearn: “A two and a one, can’t complain about that. It’s intense (the first day of Gold fleet), you get a little bit used to maybe having a boat-speed advantage, where, especially in stuff like today when it was quite flat water, everybody is about the same speed. So, it becomes really important to position in the right spots. The first day is always a shock to the system, so it’s nice to get a good couple of races in on the first day of Gold fleet. Not having a considerable drop yet helps a lot. A seven is my worst race at the moment and that is a pretty good result in Gold fleet, so I’m pretty happy with having a solid regatta so far. It means I can race for the win rather than be racing conservatively.”

With eight races down the Laser Radial looks like being a two-horse race between the 21-year-old Hungarian, Maria Erdi and the 28-year-old Finn, Tuula Tenkanen. Erdi finished 15th in the second race, her first time out of the top ten, but Tenkanen had been 19th in the first in shifty conditions. Just a point separates them.

But with three races to come tomorrow before the medal race on Saturday, there is still plenty of room for big changes.

A tricky day on the water shook up the fleet and only Australia’s youngster Zoe Thomson prospered, winning the second race from the front after a good second in the first race. That moved her up from 17th to 9th. She struggled with Perth conditions on Wednesday but hopes to prosper in them if the forecast delivers tomorrow. Another day like today could even put her in contention for a wide-open bronze medal.

Zoe Thompson (Australia, ninth) :“I’d been chatting to the Australian Laser boys and their main message was to keep it simple, get off the startling and sail fast. I’ve been struggling with my execution and today I sailed fast and made less mistakes. Swifto (Luke Elliott) and Wearny (Matt Wearn) are the role models out there and they’re at the national training centre a lot but when they’re at home it’s really good to get tips off them. I struggled a little bit yesterday – a couple of capsizes – but hopefully tomorrow’s like home.”

Maria Erdi (Hungary, leader):“The first race was 6-8 knots, so there was wind but it was really shifty. I had a great start and looked like I was going to win the race and then the wind was so crazy that I didn’t commit to any of the sides and then both sides came in (laughs) and they passed me on both sides (on the first upwind).

“Just before the second race it looked like the wind was coming in, but then at the start it dropped. I thought that the left was going to come in and I think most of the others did too, but there was a massive right shift and I was like 25th around the top mark. I think I managed to get back to 15th.”

With 12 of the 15 races before the medal race completed, Italy’s Mattia Camboni extended his lead over his countryman Daniele Benedetti by 24 points. Camboni won the first race, survived the crash in the second and his consistency keep him riding high even though Benedetti won the third race to give himself a chance.

Benedetti has won five of the 12 races to Camboni’s three, but Camboni’s lowest finish is ninth. At some point Benedetti may have to worry about covering Poland’s Piotr Myszka, who is just one point behind him.

The model of consistency, France’s 2016 Rio Olympic Champion, took the lead and holds a 12-point advantage after 12 races. She racked up her third win in the second race yesterday and has not finished outside of the top four this week, leaving her two rivals from China behind her. But the gap is nowhere big enough to relax with three more races before the medal race.
Peina Chen, who Picon beat into silver in the Rio Olympics, had a good day too, moving back into second past her compatriot, Yunxiu Lu, with a win in the first race. Lu, the overnight leaders uncharacteristically struggled, having her worst day of the week to drop nine points behind Chen, having started the day 13 points ahead of her

Charline Picon (France, leader): “I’m not really focussing on results here, I’m working on technical points, it’s going well. For the Chinese women, it's different, they are having Olympic selection. I'm a little tired after this long series of races, but it's really cool what I can produce without too much of practice, it doesn’t normally work like that for me. It’s a great battle, physically, I'm not 200%, but I’m finding my way into the races with my tactics, my technique…I’m fighting with the weapons I have at the moment and it's going pretty well for now and I still haven’t played my joker, which is cool.

“What is cool is that we’ve faced a lot of conditions in the week and whatever the conditions, I'm here and I haven’t crashed.
Today, we had a race less than 7 knots, the second a little more and the last was planning, so we had to adapt, it wasn’t simple, but I managed it.”

Peina Chen (China, second):“A good day for me. Everything is possible, it’s still not finished, everything can change.”

Results and standings after the fourth day of the Semaine Olympique Française in Hyères: