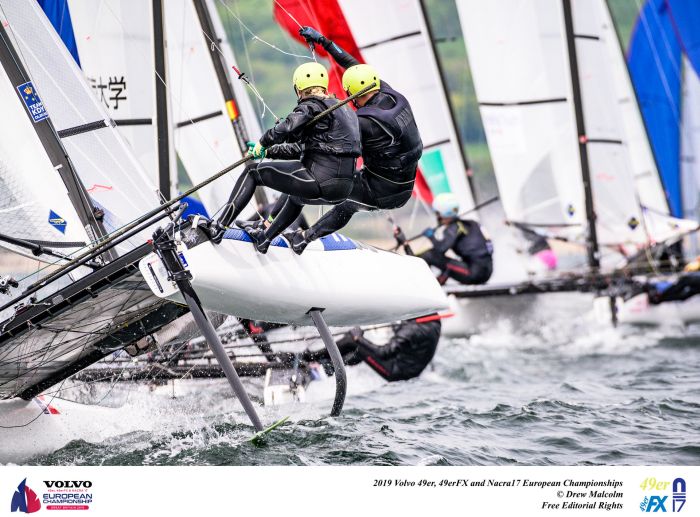 John Gimson and Anna Burnet foiled to the front of the Nacra 17 fleet after a solid start to the gold fleet finals with scores of 1,6,2. “We’ve finally found some downwind wheels,” said Gimson. “The speed is good and we’ve learned a lot about the right technique for those conditions.”

Burnet said things could change significantly now that the wind is dropping lighter for the final three days. “We still hope to be fast whatever the conditions, but a change of breeze could suit some of the other teams and change things around a bit.”

The best performers of the day were the Danish crew of Lin Cenholt and CP Lubeck, whose scores of 2,3,1 have launched them into second overall, just one point off the lead and two points ahead of the previous regatta leaders from Italy. Ruggero Tita and Caterina Banti scored 4,10,3 for a still very solid – if unspectacular – day out in the waves of Weymouth Bay. There’s 12-point gap back to the other top Italians in fourth place, Vittorio Bissaro and Maelle Frascari, who made amends with a first-race 15th by following up with a race win and a 4th.

The Argentinean crew, Mateo Majdalani and Eugenia Bosco, remain in podium contention in 5th overall. Ben Saxton and Nikki Boniface have been glued into sixth place for some time now, and will rue the missed opportunity to climb up the leaderboard after a mishap at the end of the first race today.

“We were gybing for the finish, in the lead, and I jumped out of the boat,” said Saxton self-mockingly, always able to smile at any situation. “Just as well as I’ve been working on my swimming because I caught the boat up while Nikki was trying to sort out the mess.”

They still salvaged a 12th across the finish line, getting the boat upright quickly but still disappointed to have made the error in the first place.

With the wind set to drop lighter from Friday onwards, the Nacras have perhaps had the best of the foiling conditions, and it could be back to low-riding for the remaining days of the Europeans.

49erFX: Fresh faces at the front

The usual suspects were hard to find in the first race of the 49erFX gold fleet. With the wind lighter than expected and the teams struggling to power their skiffs through the choppy swell of Weymouth Bay, some different names came to the fore.

Anne-Julie Schütt and Iben Nielsby seized the initiative and read the tricky variations in the course better than anyone as the Danes won the first race in a Force 3. Odile van Aanholt and Marieke Jongens led the race for a while and still managed to hold on for a useful second while their rivals for Dutch Olympic selection were sixth, the reigning World Champions Annemieke Bekkering and Annette Duetz. After a lacklustre qualifying series, was this the start of a fight-back by van Aanholt and Jongens? They’re known to enjoy the lighter breezes, but a follow-up 15th and 26th in the following two races keeps them rooted in the mid-teens on the scoreboard.

One of the high-profile casualties from the first race was the British team of Charlotte Dobson and Saskia Tidey who fell foul of the U flag at the start and were disqualified from the race. They responded in the best way possible, winning the second race comfortably and then scoring a respectable 4th place in the next.

Meanwhile it had been a shaky start for one of the discoveries of this regatta, the world-class performance by the 2018 Junior World Champions from Sweden who had performed so well in the strong breeze at the start of the week.

Vilma Bobeck and Malin Tengstrom started the day with a 19th, but were looking good as the breeze built during race two. Half way through a gybe, just missing a weather buoy in the middle of the course, they failed to notice that the larger buoy was also attached to a smaller secondary buoy by a connecting rope. Their skiff lurched to a halt as it run over the tripwire, forcing the Swedes out of that race with a DNF on their score.

Just as the Brits had responded to adversity with a race win, the young Swedes had their bit between their teeth for the final race. “Our coach told us we had the speed, we had the handling to be able to go and win, we just had to do it,” said Bobeck. “So we started well, we had good speed, we could stretch our legs and we sailed fast to win the last race. That felt good.”

This puts them in 8th overall, and now the challenge is to see if they can maintain or improve on that place as their favourite breeze gives way to the lighter airs forecast for the weekend.

Dobson and Tidey will be looking forward to dropping that U flag score from their results once the second discard comes in, but for the time being they are third on 52 points. Bekkering/Duetz are second on 32 points and some way ahead, after a solid, relentlessly focused day of 4,2,2 scores are the reigning Olympic Champions from Brazil. Martine Grael and Kahena Kunze sit on 21 points and as yet have shown few signs of weakness.

While racing earlier in the day may have seemed relatively straightforward for the 49erFX, the same race course proved a very different diamond for the men to crack. Combining the three qualifying fleets into one gold fleet, meant a very close point battle going into the day, and very tight racing on the course itself, which would prove quite tricky with big shifts and huge variations in wind strength.

In Race 1, the Germans Heil/Ploessel appeared to lead from the right early, but a late left shift let the Swedes Sylvan/Anjemark sneak into first at the top mark, the Germans in second and 2008’s Olympic Gold Medallist Jonas Warrer with crew Jakob Jensen from the left as well to round third. A mishap at the bottom marks saw the Germans capsize on a rushed gybe, dropping to 16th by race end. 2017 World Champs, Fletcher/Bithell, in 6th coming into the day, played a conservative strategy up the middle right on the first upwind to round 4th, split sides with the Danes to go left at the bottom marks, and used that to pip them for second by the finish line, with the Swedes running away with the lead. The young kiwis Dunning Beck/Gunn took 4th and regatta leaders Burling/Tuke recovered from a bad start to a 5th to maintain their lead after race 1 of gold.

That leaderboard was about to change though. The left side favor of the first race had most of the fleet battling for the pin in the second, and after a general recall, the start of race two had Burling/Tuke lose the battle at the pin, tacking out onto port and then fouling their fellow Kiwis trying to cross on a port/starboard, thus spinning and sitting momentarily last overall.

The Belgian team of Lefebvre/Pelsmaekers executed best, a couple of boats up from the pin, they then nailed the port tack layline with a big left shift to lead by a margin at the top. Second furthest left was the young Brits Hawkins/Thomas, thus rounding second followed by the overall second place team, defending European champs Botin/Marra from left as well into third.

After racing, crew Yago Marra commented: “We’re very happy with our starts, in the second and third races we started middle of the line and felt that was a good strategy for being able to get out the left-hand side.” That race itself they climbed up to second, and into the overall lead (with Burling/Tuke finishing 13th), while SUI steadily moved through the ranks to finish third.

That performance was to continue for the SUI team Sebastian Schneiter and Lucien Cujean, who in the 3rd race started a conservative six boats up from the pin, but were able to execute with speed and good timing out to the left-hand corner, just chasing the Argentine Lange brothers into mark one.

Lucien explained: “We’ve never felt so fast in those conditions before, we had really good speed which made life much easier. We overtook the Argentineans by going further into the left-hand side corner downwind, leaving the gybe as late as possible, and moved into first by the bottom.”

In front they stayed, moving them from 20th to 10th on the day, with the best score line of the fleet for the day with an 8,3,1. A solid 3rd position kept the Spaniards at the top of the leaderboard, while a decent 5th rounded out a good day for the 2017 World Champions Fletcher/Bithell.

Bithell summed up their day and the conditions, with a look to the rest of the racing : “We had a lovely breeze out there in the bay although it felt like someone had a switch on the windspeed, it was so up and down. We had a solid day with three counters so we're happy. There are plenty of teams in this regatta who could win and there's a long way to go yet so we're just focused on our own racing at the minute. For now it's head down and just go for it. The weather is going to get worse over the next few days and we said before the event that the rainier and colder it is the better for us! We hope the Spanish and Kiwi lads struggle with the proper British summer.”