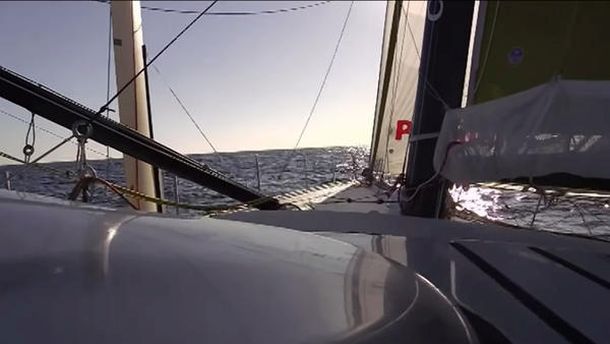 After making their strategic choices for the passage of the Cape Verde islands the balance is still quite even between the top three boats of the Barcelona World Race fleet. Only GAES Centros Auditivos – yesterday’s leaders who repositioned to the west today – seems to have lost a few miles.

Alex Thomson and Pepe Ribes charge down the west wing on the silver bullet Hugo Boss has netted them some useful leverage, now racing at the same latitudes as leaders Cheminées Poujoulat, albeit abeam 46 miles to the west of Bernard Stamm and Jean Le Cam.

Hugo Boss was flying very early this morning, hitting 21-22kt averages, and through until the afternoon seemed to be reaping a reward for the extra wind pressure seen to the west. But this afternoon, Stamm and Le Cam are quickest while Neutrogena – this morning’s leaders – have been sailing a lower angle to take some west while they can.

The leading trio have about 700 miles to the Equator, expected in the Southern Hemisphere on Monday. The Doldrums are preparing a welcome, expanding north to meet the leaders as the brisk trade winds subside. All of the leading eight co-skippers have been across the line before at least once and all will have experienced more difficult crossings. This time it looks, according to present predictions, as if their passage can be relatively pain free.

The NE’ly trade winds will veer and ease as they top boats work south. Today the breeze has been dropping away from average 20-25 kts to more like 15. The lighter winds will correspondingly reduce the pressure the duos have been feeling.
Guillermo Altadill reported today that even he had been feeling the pressure on Neutrogena:

“It feels like the Atlantic is full of IMOCAs, last night we crossed GAES only 200 metres behind us. They were on the opposite gybe and we were making 20kts. I was making a coffee. When I came back on deck I saw under the moon a sail and their green light. That was a surprise. Then early in the morning as the sun rose I saw another boat, it was Poujoulat. Still there is so much racing to go but it is hard physically and very intense.”

In fact, in straight line terms Neutrogena is about 22 miles behind the latitude splitting Hugo Boss and Cheminées Poujoulat. Not surprisingly, the Swiss French pair have been on the same ‘dodo, bulot, dodo’ routine as their rivals. Steer, sleep, steer, sleep. Stamm recounts being glued to the helm for hours at a time in the fiery trade winds and awkward seas:

“We are stuck to the helm, non stop. When manouevres are done we are spent and head for the bunk, you are on the helm or in the bunk for two or three hours. It will get calmer but at the moment but it is still always on the helm until near the Doldrums. But it is all good, good feelings, good sailing, and for the moment good weather, so all in all a good race!”

Co-skipper Le Cam is keeping mum right now, words from the boat have been scarce and so far none of Le Cam’s humorous videos, but for sure he and his erstwhile co-skipper Bruno Garcia are pleased to get paste the Cape Verdes and Day 10. It was on this day four years ago they had to retire with their snapped mast. Today Bruno Garcia noted that conditions for We Are Water, the Farr design he is racing with his brother Willy, are much the same as in 2011. Fast sailing, big seas, crossed at times with strong trade winds.

“We are limiting the boat rather than it limiting us.” Remarked Garcia today of We Are Water the former Estrella Damm which was sailed to fourth in 2011 by Pepe Ribes and Alex Pella.

Their primary desire is finishing and so they have remained quite cautious, although they are steadily pulling back 40-50 miles a day on One Planet One Ocean.

Just when things seemed to have been going better for NandorFa and Conrad Colman on Spirit of Hungary, they report the loss of their main light to moderate winds A2 gennaker. A strop broke and dropped the kite into the water during the night. According to their reports there was little to recover. Fa and Colman were negotiating the Canary Islands today, making solid speeds.

Renault Captur, Jorg Riechers and Sébastien Audigane are making steady progress, computed to be up to third today, but the German-French pairing struggled momentarily with a rudder problem which took some time to fix. They also suffered a steering issue in the Strait of Gibraltar which they were dealing with when they strayed into a separation lane. They were today notified of a 20 mins penalty from the International Jury. Their minor misdemeanour, failing to bear off to 90 degrees, receives a small penalty.

Bruno Garcia (ESP) We Are Water: “Our decision (to go west at the Canaries) was because we were at the back of the fleet and the high was quite close to the Iberian coast and it was quite stationary.  So that means the wind will veer from the NE to E as we go south and so being west is always the best position. We Are Water and We Are Very Happy with our Boat!  We are limiting the boat rather than it limiting us. Four years ago when we broke the mast we had the same winds as we are having now, the sea is quite rough. That means that to get down to the Big South we need to be quite cautious.”

Sébastien Audigane, FRA, Renault Captur: “We're in the Cape Verde archipelago. It was two nights ago when we saw fishing boats and some factor ships but it was all OK, they didn’t really get in our way. It was tougher with the fishermen during the night, but we got through all that.
The leeward rudder kicked up. We were chatting at the time, changing watch, and it was a bit hairy, as we were going along at between 18 and 20 knots. So we had to spend time furling the gennaker and setting up the rudder again.

“We’re working hard to catch the leaders, paying attention to the trimming, hoping to get back up there as we reach the Doldrums. Without taking too many risks. Apart from the rudder, we haven’t had too many problems. Just minor bugs with the electronics and computer system. The boat is in good shape and we’re taking care of her.

“Since the start, we haven’t been able to sleep much. But we have managed to get short two-hour rests. We take it in turns every couple of hours. Later on, it should be easier to grab some more rest.”

“Renault Captur is zooming down the slopes. On several occasions we were caught doing more than 27 knots, but the local police just don’t have the power to catch us.

“Joking aside, at around 6 this morning, by which time the wind had dropped off and as we were about to change watch, the leeward rudder suddenly kicked up…

“We broached, eased off the Code5 and furled it, not forgetting to put the keel back in the middle position to avoid a Chinese Gybe … It is easy enough to say, but when you’re faced with doing all that, you’d rather be somewhere else. We got back on track half an hour later.

“Since then, after a good well-deserved meal, we shall continue to head towards the cape Verde Islands and then the Equator. There may be something interesting coming up (in terms of catching the leaders). We shall see…