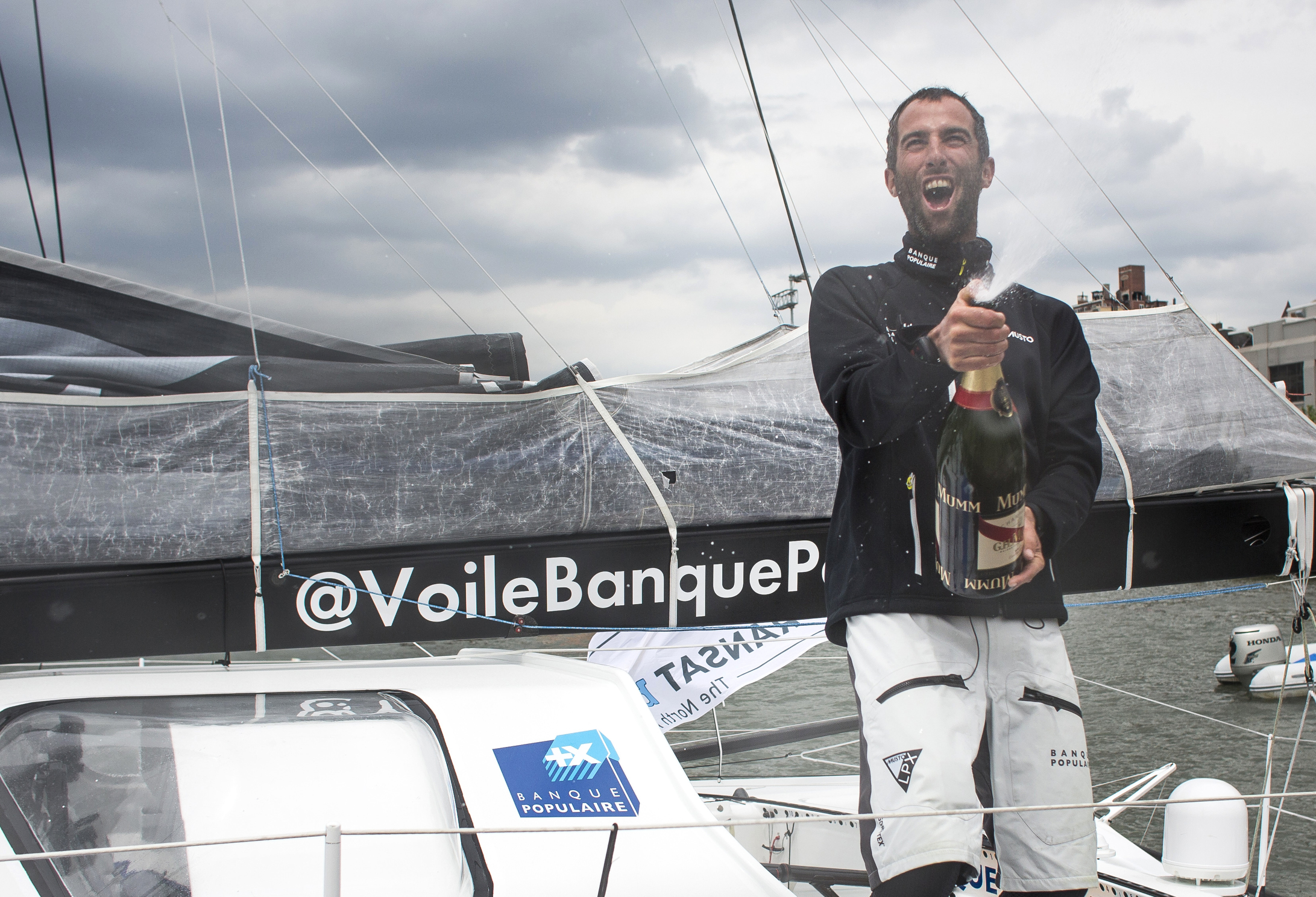 He is known as the Jackal in French sailing because of his relentless competitive zeal and Armel Le Cleac’h lived up to his name with an impressive win in the IMOCA 60 class of The Transat bakerly today – his first victory in the class in 10 years.

The two-time Vendée Globe runner-up had completed the 3,050-nautical mile course from Plymouth in 12 days, 2 hours and 28 minutes and 39 seconds. His total time includes a 31-minute penalty for the accidental breakage of his boat’s engine seal. Le Cleac’h informed the Race Director about this at 16:26 local time yesterday.

The French skipper had sailed a total of 3,751 miles through the water at an average speed of 12.91 knots. As he crossed the finish line, waving in his moment of victory to his shore team on their coach boat, Le Cleac’h’s main rival for line honours in the IMOCA 60 class, Vincent Riou on PRB, was 31 miles out to sea.

Ever since day three, as the leading IMOCA’s surged westward after turning to starboard at Cape Finisterre, Le Cleac’h has kept Riou at bay and covered his every move.

This was a fascinating battle between the foiling Banque Populaire and the more conventional hull on PRB as two of the favourites for this year’s Vendée Globe went toe-to-toe. In the end, it was as Le Cleac’h was docking his boat at Brooklyn Bridge Park, that Riou was crossing the line, just 2 hours, 21 minutes and 32 seconds behind him.

Riou reported earlier today that 24 hours after the fleet set sail from Plymouth on 2nd May, he lost two of his sails overboard, which forced him to rethink his tactics and routing for the race.

The Transat bakerly showed us two things. One, that even without two of his most important sails Riou can mix it with the best of the foilers, and two, that Le Cleac’h has a boat that is robust enough to deal with a full Atlantic storm. Just two days ago he said this race had given him the confidence he needs in his new rocketship to take on the Vendée Globe in it.

Speaking at the dockside, Le Cleac’h said he was delighted to take his first win in the IMOCA 60 class for a decade.

“I am very happy,” he said. “Ten years ago I came into the IMOCA class and this is the first time I have won. I have finished second a lot of times – in the Vendée Globe, The Transat, the Transat Jacques Vabre and the Route du Rhum, so today is a new day for me. I now I hope to be the first in the Vendée Globe.”

He paid tribute to Riou: “Vincent is a very good competitor. He has won all the races over the last year and he was favourite at the start. It was a pleasure to do this transatlantic race, because every day I could see Vincent behind me, and I said to myself, ‘OK, this race is for me.’”

Asked about his new boat, Le Cleac’h commented: “The foiling boat is a good choice. Last year it was the first year with this boat and we had some little problems and we didn’t have good speed.

“But now, we make a statement. And I hope it is the best boat for the next Vendeé Globe and I that I proved it during this race. So I am very happy for me, for Banque Populaire and for this very nice boat.”

Behind Riou the third-placed IMOCA 60 is Jean-Pierre Dick’s St Michel-Virbac which is still 138 miles from New York and expected to arrive at midnight tonight. Then comes Paul Meilhat on SMA who has been using The Transat bakerly as a qualifier for the Vendée. He still has 343 miles to go to reach the finish.

Two other IMOCA 60 skippers have failed to complete the course. Seb Josse on Edmond de Rothschild, retired mid-way through day two after the battens in his mainsail were damaged during a gybe. And yesterday Britain’s Richard Tolkien was forced to abandon his yacht 44, 880 nautical miles west, southwest of Horta in the Azores. After struggling with technical issues and sustaining an injury to his head, Tolkien has been taken on board the cargo ship Anton Topic which is bound for Philadelphia.

In the four-boat Multi50 class, Gilles Lamiré (Frenchtech Rennes St Malo) is less than 30 miles from the finish line, and is expected to arrive by 17:30 local time this evening, with a 320-mile advantage over Lalou Roucayrol (Arkema).

Trading places at the top of the Class40 fleet are Thibaut Vauchel-Camus (Solidaires en Peloton–Arsep), and Phil Sharp (Imerys). Earlier today, Isabelle Joschke (Generali-Horizon Mixité) officially announced her retirement from The Transat bakerly, after discovering serious damage to her boat’s structure yesterday. She is now en route to Saint-Pierre-et-Miquelon in Newfoundland.