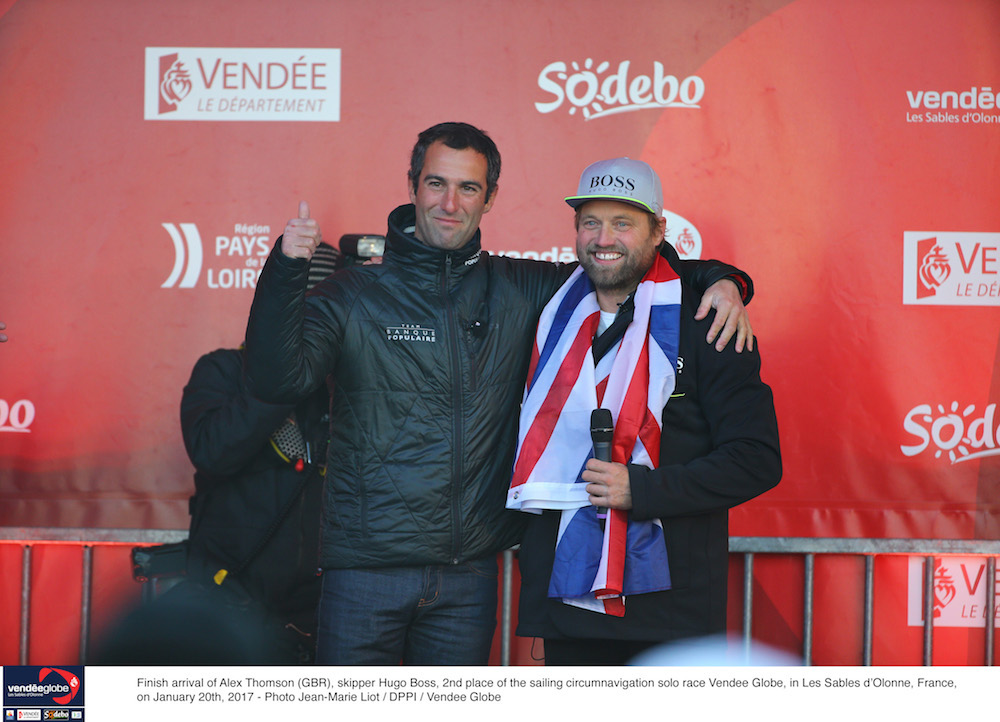 Vendée Globe winner Armel Le Cléac'h and second-placed Alex Thomson were today basking in the glory of becoming the solo round the world race's fastest ever sailors. Le Cléac'h and Thomson arrived in the race's home port of Les Sables d'Olonne in France just 16 hours apart after more than 27,000 nautical miles of racing over 74 days to claim the top two podium places.

French skipper Le Cléac'h's time of 74 days, three hours and 35 minutes set a new Vendée Globe record, breaking the previous fastest time by almost four days. Despite losing one of his two foils two weeks into the race Thomson also broke the pre-existing record, set by Francois Gabart in 2013, taking 74 days, 19 hours, 35 minutes to sail from Les Sables round Africa's Cape of Good Hope, Australia's Cape Leeuwin and South America's Cape Horn then back to the start. Although fiercely competitive on the water Le Cléac'h and Thomson are great friends on dry land, and the Frenchman was first in line to welcome his British adversary as Hugo Boss pulled into the marina. “The next one's for you,” Le Cléac'h told Thomson as the two shook hands on the dock, a nod to Thomson's record in the Vendée Globe of third in 2013 and now second.

Thomson, 42, set out become the first Brit ever to win the race, but ultimately had to settle for second behind the formidable Le Cléac'h, the runner-up in the past two editions. He was in high spirits as he coated the scrum of reporters and cameramen waiting on the pontoon in champagne before hinting that a possible return to the Vendée Globe in 2020. “Second is an improvement on third, but it also means there's room to manoeuvre afterwards,” Thomson told a packed press conference. “Third, second, then it has to be first. I can't leave it just at second, I would never be satisfied with that. But it's a huge commitment, and it's often harder on the family than it is on the skipper. I haven't had that conversation with my wife yet!”

Among the many famous sailors sending messages of congratulations to Le Cléac'h and Thomson was François Gabart, winner of the 2012-13 Vendée Globe. “I'm really happy for them,” Gabart said. “I just wanted them to put on a big show, and they did that. It was great to see these guys going so fast, with Alex pushing Armel all the time. It was a wonderful show right up until the end.”

While Le Cléac'h and Thomson were immediately thrust into a hectic schedule of media duties, 500 miles south west of Les Sables Jérémie Beyou was making 10 knots towards the finish line in a comfortable third place. Beyou, who has been sailing 'blind' without weather information for much of the race, said he faced a tricky last few days to the line, compounded by problems with his wind instruments. “When those ahead of you start to finish, you want to be there too,” the Maitre CoQ skipper said. “Plus the wind instruments aren't working properly so I need to be at the helm all the time. I've been steering since yesterday and I'm a bit fed up.”

Jean-Pierre Dick has slipped from fourth to six after opting for a routing slightly to the west. The French skipper is slightly more north than Yann Eliès and Jean Le Cam but their position 75nm south-east puts them slightly closer to the finish line. Meanwhile Spanish skipper Didac Costa became the 15th skipper to round Cape Horn, passing the milestone on the southern tip of the South American continent at 1343 UTC, some 75 days, one hour and 41minutes after the race start on November 6. Romain Attanasio, in 16th, was this afternoon 65 miles adrift of Cape Horn in 25 knots of wind from the north-west.