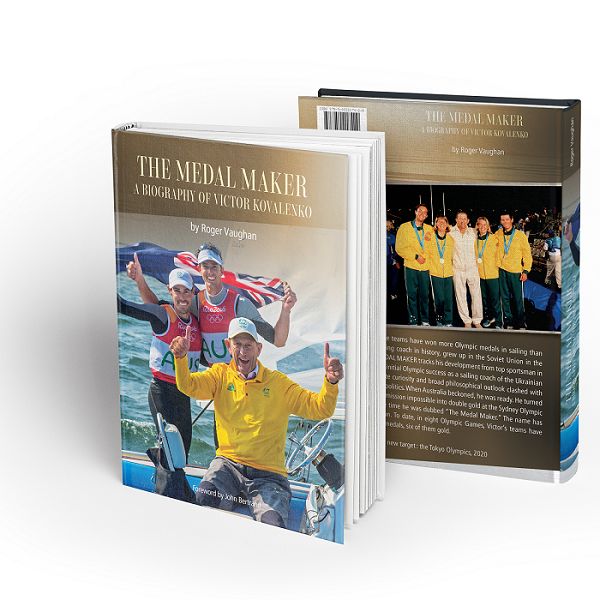 Written by Roger Vaughan ‘The Medal Maker’, a biographical story of Victor Kovalenko Australia’s most celebrated Olympic sailing coach, will be launched at a function at Middle Harbour Yacht Club on Thursday evening, 18 May.

David Kellett will host the launch at the club, home to the Australian Sailing Team, with special guests in attendance and Kovalenko on hand to sign copies of his life story.

In October, Kovalenko, who became an Australian citizen on Australia Day in 2003, will also celebrate 20 years since he arrived on Australian soil to take up a sailing coaching position, later to become Head Coach of the Australian Sailing Team.

‘The Medal Maker’ tells Kovalenko’s life story, from his birth in Dnipropetrovsk, Ukraine, to life as a student on the Ukrainian athletic team, to 10 years later becoming an Honorary Master of Sports and subsequently President. It describes his own Olympic sailing aspirations, denied the opportunity because of a boycott on the 1984 Games.

Moving on to coach the 1996 470 Men’s and Women’s Ukraine crews to Olympic Gold and Bronze respectively, Kovalenko first visited Australia with his team in 1991 for the 470 Worlds.

“I stayed to help Jeni Lidgett and Addy Bucek with their 470 Olympic campaign. I loved Australia. I loved the people and the gold and green hills – Australia is my love affair,” Kovalenko declared on his return in 1997.

Struggling to coax results from its 470 sailors, the Australian Yachting Federation (now Australian Sailing) asked Kovalenko to coach its male and female 470 teams, his reputation earning him the sobriquet, ‘The Medal Maker’.

He shunned that moniker, saying it made him uncomfortable, but as the Olympic medal tally continued, Kovalenko became accustomed to it.

The man behind Australia’s most successful results at the 2012 Olympics has received many accolades since arriving in Australia; an Order of Australia medal in 2012 and inducted into the Sport Australia Hall of Fame in 2013.

Today, this softly spoken man, whom I refer to as ‘the boat whisperer’, is arguably the most successful sailing coach in the world. He has coached crews to 10 Olympic sailing medals, among them Malcolm Page, the only person to win two (they were successive) Olympic gold medals and the most decorated 470 Men’s sailor of all time.

In 2007, Page wrote to me: “Victor arrived and was put in charge of a woeful Australian 470 team. It must have been a daunting task to bring them to the top of the world from the bottom. Later, he took the selected boats to the Sydney Olympics and won the double 470 Gold (Tom King/Mark Turnbull and Jenny Armstrong/Belinda Stowell).

“He is one of the proudest Australians I’ve ever met. His citizenship certificate sits proudly on the window sill, so it will always be in the corner of his eye as he looks across Sydney Harbour and out into the ocean – and probably keeping an eye on his team training.”

Page, Captain of the Australian Sailing Team from 2005-2012, finished: “I still remember his first session. The local coach was putting us through our paces and Victor was an onlooker. Our performances must have been bad, because the next moment I looked, he was falling asleep in the boat. He insists it was jetlag. I’m not so sure…

“A day later, he was in full force with that whistle and it didn’t take long for us to realise that things were going to be hard – but rewarding.”

Today, Page, Chief of Olympic Sailing for US Sailing, says: Victor is such a good guy – and obviously an important person to me. Oh, and he’s also done a pretty good job at coaching as well!”

Married with one son, Kovalenko says he could not have accomplished all he has without the support of his wife, Tatiana. “She looks after everything.”

‘The Medal Maker’ will be distributed in Australia from 19 May through Boat Books at 38 Oxley Street, St Leonards, NSW, or order online at: boatbooks@boatbooks-aust.com.au

Those outside Australia can order via: www.altamiracreation.com/books