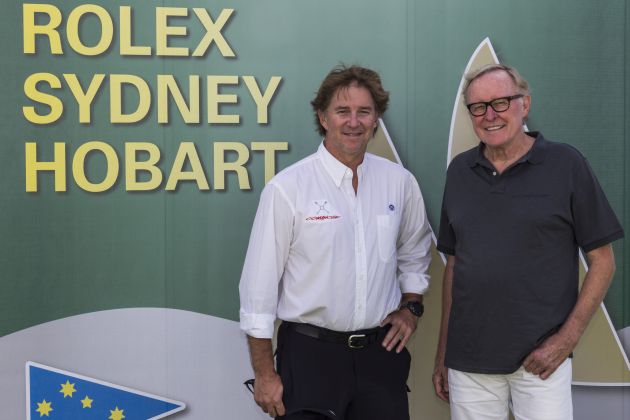 Michael Logan, the Australian Bureau of Meteorology’s NSW Weather Resources manager, delivered the early race forecast to all the competing skippers this morning at the Cruising Yacht Club of Australia, and the overriding message is that this 2015 Rolex Sydney Hobart is going to be one of the most fascinating ever – there is something for everyone.

Logan expects Sydney to turn on a glittering Harbour start on Saturday, in a good 15 knot nor-easter, which will build to 25 knots offshore during the afternoon. A rollicking, hang-on and enjoy the ride first few hours as the super maxis and grand prix boats light up. Make the most of it though, guys, because by Saturday evening a front will work its way through the fleet.

“This will be an active front,” Logan reckons, “with rain and thunderstorms.” Winds around 25 to 35 knots, but that’s the average. The gusts around those thunderstorms could hit 45 knots.

Wind against a south flowing current will be about as uncomfortable and boat breaking as the NSW coast gets. Crew breaking too – some beaches may be awash with Christmas dinners on Sunday morning.

The southerlies will continue into Sunday, but contrary to early long range forecasts, far from 50 knot winds in Bass Strait, the breeze will moderate, and by 5pm the BOM expects light winds along the Tasmanian coast

By late Monday the winds around Tasmania and in Bass Strait will be really light; very ordinary news for the mid-sized yachts in the race for the Tattersall’s Cup, awarded to the overall winner.

The forecast makes it very difficult to pick a favorite, other than to say that the owners of all-round boats like the Farrs, Carkeeks, older TP52s and perhaps the vintage IOR boats like Maxi Ragamuffin and Wild Rose will think they are in with a better chance than the downwind and reaching sleds. Keep an eye on Rambler if the forecast holds and the front runners get the best of the breeze.

The big issues will be getting through that first night aggressively but undamaged, and choosing the best angle down Tasmania to Tasman Island.

As for line honours, there is a bit of deja-vu in all this for Comanche’s owner, Jim Clark. The red and black hulled American monster is undoubtedly the fastest super maxi in the world, but “light air is not our friend. The last bit will be the challenging part for us,” Clark admits.

“Every boat is built for different reasons. We go fast off the wind, but in light air Comanche starts to become a big fat lady. If we are not healing over, there is a lot of drag.”

Last year Comanche stormed into Bass Strait, then forfeited the lead to Wild Oats XI when the American boat hit atypical light air mid-way. Oats took 25 miles out of Comanche, and though skipper Ken Read and crew staged a fearsome comeback, there just wasn’t enough race track left to run down the Australians.

“We’ve made some changes to the boat since then,” Clark says, “and if we had this boat last year, we would have gotten through that lull more quickly.

On this forecast Comanche will love the first six or seven hours of the race and should open up a lead. She goes well to windward too, but these southerlies will be like a wet track in horseracing. It will bunch the field.

The other super maxis will put as much pressure on Comanche as they can. At the speeds these giants travel one mistake, a jammed halyard, a blown headsail, can add up to a lost 10, 15, 20 miles – just like that.

Wild Oats XI and Rambler, both light air speedsters, will pounce on any opportunity on offer in the lee of Tasmania and on the Derwent River.

It is fair to say that on his broad shouldered Perpetual Loyal, Anthony Bell is feeling a bit like Jim Clark: “We were more comfortable with the forecast a few days ago.”

Last year’s delamination destroyed Bell’s race, but that has all been fixed and he is confident his boat will go the distance, but “surviving the first night will be important” he says.

There are times when you just have to throttle off on these super maxis. You can’t simply throw these things off a cliff after cliff at 35 knots. That’s what it will be like on Saturday night: a climb up the face of each wave and then nothing on the other side. A 20, 30, foot drop.

Mind you, David Witt, the sailing master of Syd Fischer’s Ragamuffin 100, declares he has no intention of lifting his foot off the peddle. “Our goal is to win it before the old boy can’t do it again. We’re running out of races so we can’t throttle back.

“At 88, Syd’s still on the boat, extremely passionate, in the yard every day. I think it’s fantastic he‘s still doing the race. If he’s willing to go, you’d be mad not to take him. He’s inspiring. And he’s mellowed a bit, which we’re very happy about.”

This 2015 Rolex Sydney Hobart is wide open. Could we see a remake of the great Condor of Bermuda/Apollo shoot-out on the Derwent, when just 7 seconds separated first and second?

And just how close to the New Year will it be before we know the outright winner?