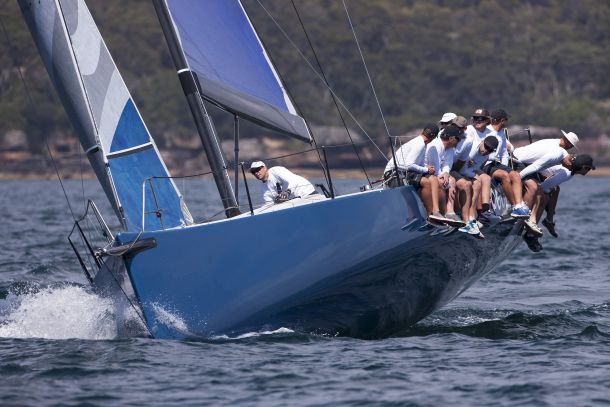 Yachting Australia President Matt Allen is bringing the newest member of his Ichi Ban family to Airlie Beach Race Week, making it the second time the TP52 will race under her new name.

The former Shogun V produced fabulous results for Rob Hanna, including beating Allen’s Carkeek 60, Ichi Ban, for overall honours in the 2013 SOLAS Big Boat Challenge. And Allen is expecting no less from the boat to which he has added a new keel fin and mast.

“In an IRC sense, the boat will rate a bit higher, but we should be faster reaching and running,” commented Allen, who agrees he will have to put the hammer down upwind to compensate for the higher rating.

“I’m really looking forward to Airlie Beach Race Week. It’s one of the best regattas and a lot of fun,” said the yachtsman, whose Carkeek 60 finished second to an impregnable Patrice at the Whitsunday Sailing Club hosted event last year.

Allen sailed his TP52 for the first time on Sydney Harbour in early July and will only have a short time on the boat before he heads of to the Transpac Race this month, sailing aboard Syd Fischer’s Ragamuffin.

“In a sense it’s quite different to my Carkeek. The mechanics of sailing the boat are different. We’re still very much on the learning curve. I’m bringing in some people who are familiar with the boat to bring us up to speed – Wade Morgan and Nitro (Noel Drennan).”

Will Oxley, the eminent navigator, will join the Ichi Ban crew too, having satisfied his Volvo Ocean Race obligations. The full crew will be a strong one, throwing down the gauntlet to others racing in the IRC Racing class.

As Shogun V, the boat finished second on line second and overall in the 2015 Pittwater-Coffs race. It won the Flinders Islet and Newcastle Bass Island races in the CYCA’s 2014 Blue Water Pointscore, which it led until missing the Rolex Sydney Hobart, the last race of the series.

Shogun V also finished the 2014 CYCA Trophy second on countback and won Class A of the 2013 Audi IRC Australian Championship.

With the Carkeek 60 Ichi Ban, Allen was fourth on line and overall in last year’s Gold Coast race and third in Division O. He made modifications ahead of the Rolex Sydney Hobart to improve the overall performance and finished eighth on line, following a third overall in the CYCA Trophy Series and winning the SOLAS Big Boat Challenge overall.

A past CYCA commodore, Allen has also produced good results with his Farr 400 Ichi Ban at earlier Airlie Beach and Hamilton Island Race Weeks. He also produced the goods with a Beneteau 44.7 with victories a three Kings Cups and at the Top of the Gulf, and an Adams 10 which won Division 2 of the Kings Cup.

The 26th edition of Airlie Beach Race Week will be held from 7-14 August on the waters of Pioneer Bay and the Whitsunday Passage.

There will be a lay day mid-regatta, offering a great opportunity for competitors family and friends to take advantage of the various entertainments organised by WSC, along with the leisure activities and restaurants Airlie Beach and its surrounds are renowned for.

Entry is online only and closes on Saturday 1st August 2015. The race committee may accept late entries after this date, subject to an additional late fee of $150.00, so save by entering now.

For entry form, Notice of Race and all information, go to: www.abrw.com.au/