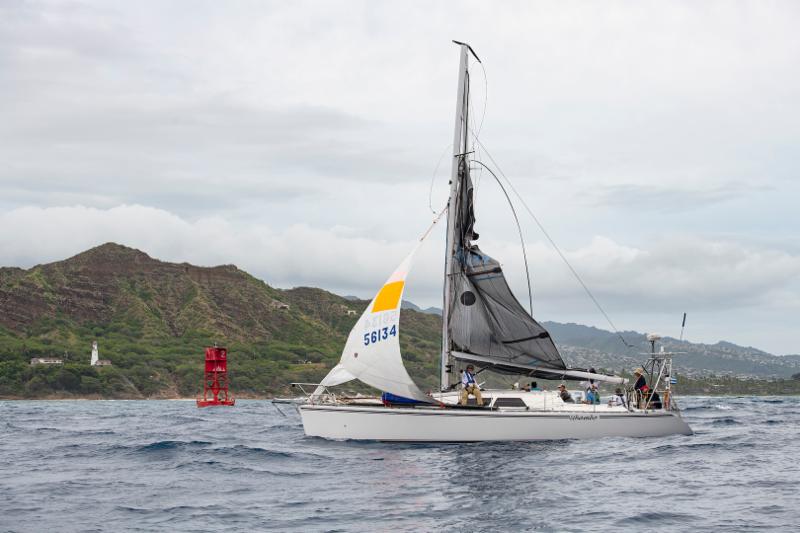 HONOLULU, HAWAII – By sunset on Monday, only a handful of yachts were still at sea heading towards the finish in the 50th edition of the LA-Honolulu Transpacific Yacht Race, organized by the Transpacific YC. This day was overcast and almost dreary compared to the bright tropical sunshine of all the other finish days, and with the final stretch after many days at sea many teams were more than ready to cross the finish at Diamond Head.

A source of fatigue and frustration for many was the unusual sea state produced by cross-swells, making the smaller and slower boats in particular difficult to sail efficiently. One team sent a message saying “On land, I will miss thrashing about the boat, getting vibrant bruises that connect to form geographic regions all over my body.” Kidding aside, for some this was also the source of damage that had serious effects on their race.

For example, Steve Ashley's Beneteau First 40.7 Onde Amo reported last night the rudder on the boat had “been lost” so they were retiring from the race and proceeding to Honolulu using the emergency rudder. No reports of injuries or damage, they have about 130 miles to go and are proceeding at a pace of about 5-6 knots. No word yet on the cause, but the reports from the course and stories from arrivals have indicated the challenging conditions from choppy and confused seas has been hard on helmsman, trimmers, sails and gear.

A rolling sea can make it hard to keep the spinnaker filled, and repeated collapsing and filling will not only be slow, but can wear down and even break sails…Russ Johnson's Jeaneau 52.2 Blue Moon has reported they blew up their last spinnaker and are proceeding under headsail.

Another example is Carlos Brea's and David Chase's Fast 42 Uhambo, who as reported last night suffered breakage to the top of their carbon spar. Yet the ultimate cause may have started with a serious spinnaker wrap a few days earlier that was so severe they were unable to untangle the sail from the spar and headstay, and were forced to sail with the mainsail only for nearly three days.

“The sea state was really confused on this race,” said Chase. “Except for one on our team, we have a crew that is new to Transpac.” Chase went on to explain getting the driving in this sea state in sync with the trim was a challenge, and this helped cause the wrap. Eventually they got it unraveled, they reset the spinnaker, and resumed racing at full speed.

But then sea state and wind strength conspired once again to cause a broach, and in the confusion the afterguy was released, the sail loaded and pulled the spar over, breaking at the third spreader set below the hounds. The team then set about fashioning a jury rig with a headstay attached to the top of the spin pole track, and a storm trysail to fly in the new foretriangle.

“For a while we tried two headsails to go downwind, keeping the main centered, and we could go 5-6 knots,” said Brea. But this rig reverted back to the trysail when on the final reach from Koko Head to Diamond Head.

The team arrived looking exhausted, but got a rousing welcome on arrival in the Ala Wai Harbor and high praise for their valiant efforts and determination. After a few mai tais and some puu puu's at their Aloha Party their spirits revived.

Another tale of sea state challenge came from Dustin Durant who raced with the large and mostly pro team on Chubasco. He said the cross seas made it tough to drive, trim and maneuver on this 67-foot renovated S&S classic yawl. Being an accomplished match racing skipper from Long Beach, Durant is accustomed to precision boat placement on the race course, but as a helmsman on Chubasco he met his match.

“Going downwind I've never driven a boat so hard to steer,” he said. “Gybing was incredibly difficult in those seas with the enormous spin pole and having to also gybe the huge main and mizzen as well. It took all of our team's skills to make this happen, this boat is simply not set up for trimming and boat handling like a race boat. We had to think through everything to not damage the boat or hurt anyone on it.”

Off watch was no better, with the boat rolling side to side in the sea state in what were cramped cabins for a lot of the crew. The galley is forward on Chubasco, and Durant claimed the motion was such that while cooking “the eggs flipped themselves.”

The first to finish Cal 40 from Division 10 was The Eddy Family's Callisto, who crossed the finish line at Diamond Head buoy at 5:11 PM local time, while the next boat in the class finishing an hour later was Don Jesberg's Viva, followed by Rodney Pimentel's Azure coming in just about an hour after that at sunset. The Cal 40's are an emotional favorite at the Transpac, being for some the pivotal design that bridged the old and new era's of yacht design, and one that in their heydey dominated the top results in this race.

“This last day the wind was higher than forecast, a good 20-30 knots,” said Callisto navigator Kerry Deaver. “No one got any sleep, but you never on the final push in this race.” Callisto sailed with only four on board: Deaver, Jim Eddy, Park Eddy and Fred Berg. “We were kept pretty busy,” she said. “When you were not sailing you were sleeping, and so we did not have the luxury of plotting tactical moves coming into the finish – we just sailed with what we had and it worked out.”

More on the tactics of the division winners will come in a final analysis report from the Navigator's meeting held after every Transpac.

In the meantime finishers will continue to fill “Transpac Row” in the Ala Wai harbor, with the rate slowing down considerably from this time yesterday. The “Tail end Charlie” award appears to be reserved for Jason Siebert's Schock 40 Gamble who is now about 300 miles out.