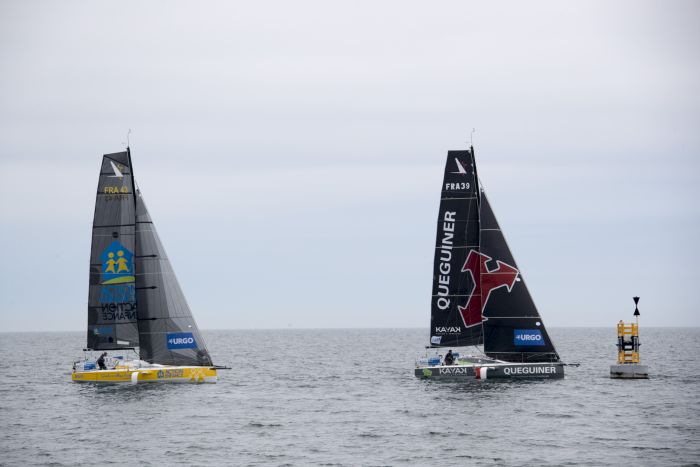 With an accumulated overall lead time of one hour and 11 minutes, and just 85 miles left to sail to the finish of the final leg on Stage 4 of La Solitaire URGO Le Figaro, overall leader Yoann Richomme (HelloWork/Groupe Télégramme) might reflect on the warnings of ‘The Godfather’ Michael Corleone: “Hold your friends close and your enemies closer.”

But – given the very calm conditions and the likely spread of the fleet through the last night of racing – Richomme can do little more than sail his own race across the bay of the Seine to the finish line in Dieppe.

After passing around the final turning mark of the course this afternoon, Saint-Marcouf on the east side of the Cherbourg peninsula, the fleet has spread far and wide to follow three basic strategies.

Richomme therefore has little or no chance of controlling or staying with his five main rivals whose time deficits extend from second placed Gildas Mahé’s at 1 hour 11 minutes, down to fifth placed and top rookie Benjamin Schwartz (Action Contre La Faim), who is 2 hours and 48 minutes behind him on elapsed time after the three stages sailed so far.

All were within 1.2 miles of him at 1700hrs BST this afternoon. But at average speeds, in the glassy conditions, of between 0.7 and 1.1 knots, anything can happen. And on this particularly engaging 50th anniversary edition of the French multi-stage solo race, there has been no shortage of surprises.

Richomme, the 2016 overall winner of La Solitaire who went to college in Southampton, last night displayed his nous and confidence in his decisions, tacking away from the leading pack on the way to the Owers mark. Along with Yann Eliés, Eric Péron and Brit Alan Roberts, they worked the change of tides to best effect and made good gains on the fleet.

Péron (French Touch) has held the lead since the Owers turn, although his middle route across the bay this evening was coming under attack on both sides.

“Yoann Richomme was one of those who went on the attack at the Isle of Wight,” explained Race Director Francis Le Goff this afternoon from the safety/media boat Étoile. “I think he is confident. He studied in Southampton and I don’t think he spent all his time in the lecture theatres. He must have got out there sailing more than once. He seemed so sure of his option. We’re 90 miles from the finish. Looking at what he has done in all four legs, it’s is looking good for him. We’ll see tomorrow morning.”

“In the next few hours we have a situation with just about no wind during tonight on the Bay of the Seine,” confirms Yann Château, the ex-racer and weather adviser to Race Direction. “Yoann can do a lot of different things in terms of choices. But using four different weather models there can be a north-south lateral separation of 45 miles (on the 90 mile stage to the finish). There are those who will go offshore looking to get to the new breeze which should come in from the north. There are those who will sail the shortest distance – the rhumb line – and take what comes. And there are those who will stay south, close to the coast looking to work the thermal winds.”

This one last transition zone, among the many which have marked this memorable La Solitaire, represents the very last chance of overhauling Richomme. But with widespread predictions of brisker winds coming tomorrow morning there will be a sprint finish from Antifer to the line, and that should be good for Richomme, the man who has one hand on his second La Solitaire trophy.

Sounding cool and confident this afternoon, Richomme said: “I found myself further away from the fleet, further offshore and lost a bit, but nothing too serious. We’re going through a transition before the wind stabilises from the northeast, which should stick with us until we get to Dieppe. The gybe (this afternoon) under spinnaker allowed me to get some sleep and eat. That was great as this is a long leg. There was a little bit of wind allowing us to get away from Saint Marcouf. The current is still hindering us as we want to get north, but when the tide changes it will be easier. It’s a pity that Eric has moved away. It was nice with him close by. But we’ll just continue now on our own way.”

Alexis Loison, who is seventh this evening at 1.1 miles behind Péron summed up the remaining challenges of the Stage. “There’s been some pleasant sailing between Owers and Saint-Marcouf with us finally getting some sunshine to dry things out. We haven’t had any big thunderstorms, which is why I decided to continue towards Saint-Marcouf. There were some good options off the Isle of Wight, which allowed those who went north to get ahead by Owers. After that it was all a question of speed getting to Saint-Marcouf.

“Eric Péron got a lead of half an hour over Yann Eliès thanks to his excellent trajectory and is being followed by most of the fleet. The wind is still northerly with a bit of east in it. It is expected to turn to the left to help us during the return leg. Eric Péron is well ahead, but behind it’s all very close. There may be a transition after Antifer with some light stuff before the northeasterly wind develops. Then it will be a matter of speed again and sailors like Eric Péron and those chasing him should not need to worry. But we need to keep an eye on the light airs around Antifer, because afterwards, the wind will be stronger with 25-30 knots to finish with stronger gusts. We’re going to have to keep up our energy levels for those final hours of racing.”

The first skippers are expected to arrive in Dieppe early afternoon tomorrow, to round off what has been an exceptional anniversary edition of La Solitaire URGO Le Figaro that looks set to continue right through to the finish.