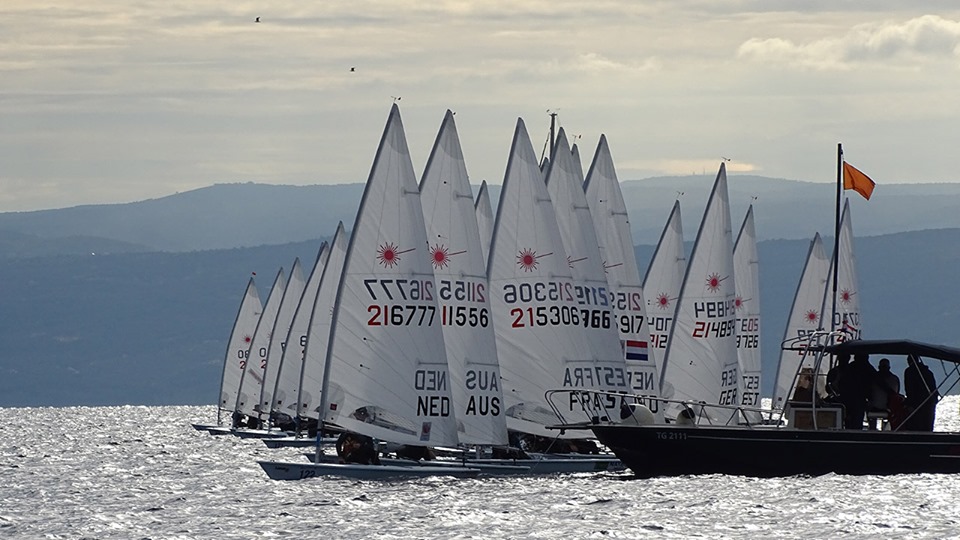 Start shows Ethan McCaullay (AUS 211556) getting of the start nicely

Split, Croatia: Much like yesterday, everyone was up bright and early, sailors were rigging boats before 0700, and race committee left the harbor by 0730 for the 0900 first signal, with the Golf flag was lowered at 0750 and sailors gathered in the starting area by 0830 under sunny skies and good north-east breeze.

Stable winds at 8-10 knots under clear and sunny skies, and the sailors were eager for races, but fortunately weren’t too eager at the start.

The Men’s Yellow fleet was keen to race, as well, but with the forecast calling for a fade mid- or late-morning, race committee postponed to allow time for the Blue fleet get around the course. If Yellow started and completed a race, and then the wind died, the two Men’s fleets would be unbalanced again.

All held well for the two fleets on the course. The wind had dropped, but remained stable at six to eight knots. At ~1000, Blue completed the entire course, and the Women were shortened at Mark 2, after two beats and a reach.

The Men’s Yellow fleet was ready to start, to be followed by Men’s Blue and the Women, but wind had decreased to a marginal 4 to 6 knots. More problematic was a significant shift to the right with oscillations in excess of ten degrees in either direction.

The Race Committee held the sailors on the water for some time, waiting for stable conditions for a fair race, but it did not come. AP over H sent the sailors to shore at 1130, and racing was called for the day at 1400.

So, where do things stand going into the final day?

All fleets have two races each. Reassignment for the Men’s Yellow and Blue fleets has been done. And, if two races are completed tomorrow, and the forecast suggests it will, then we will have a championship.

In the Men’s fleet, Pere Ponseti (ESP) is leading Vishnu Saravanan (IND) by one point, although they have been racing in different fleets. That will change tomorrow with fleet reassignments. They are followed by Under-19 sailors Paul Morvan (FRA) and Juan Pablo Cardozo (ARG).

The hope is to have at least two more races tomorrow (four are needed for the Championship to be valid) and the rankings are likely to change before it’s over. Also, if four races are completed, one discard is allowed.

And so, it all comes down to the last day. Good luck to all of the sailors. And, especially, to the race committee!