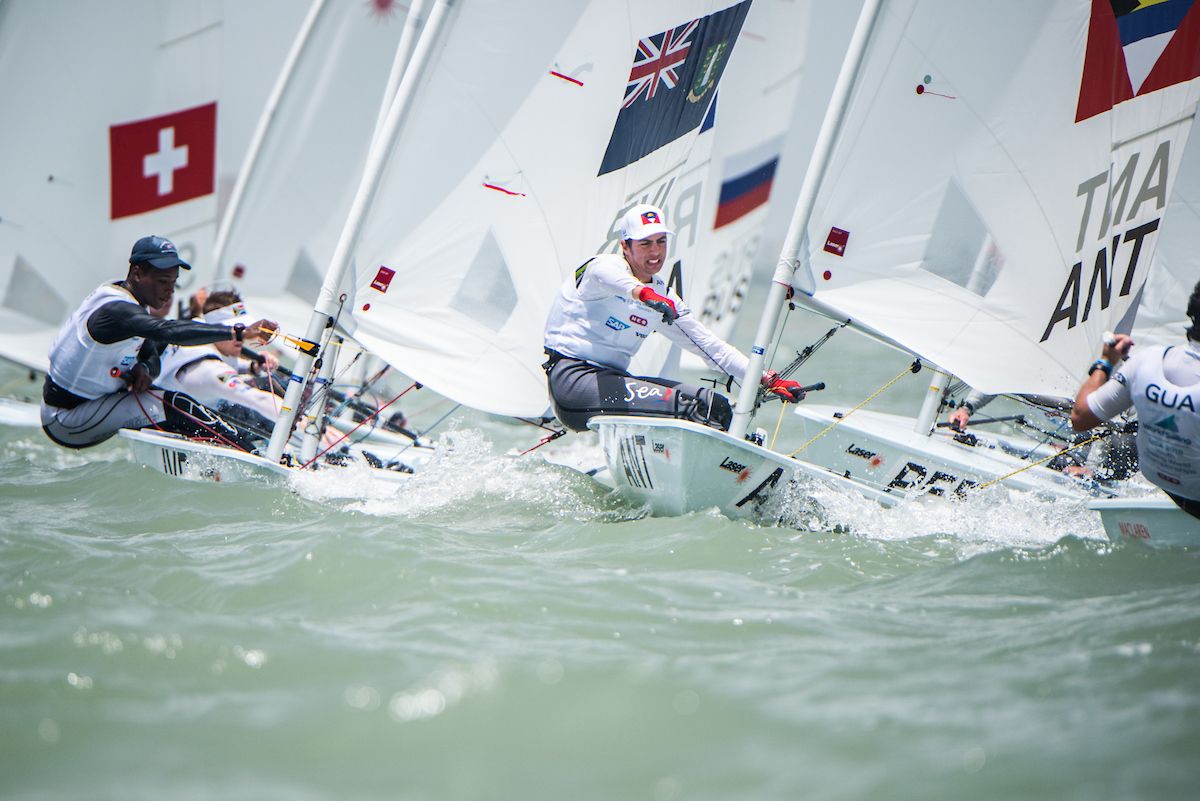 Following on from last evening's splendid Opening Ceremony hosted by 11th Hour Racing and The Harte Institute, a blustery southeasterly breeze allowed for the full complement of 23 races scheduled among the nine classes.

No one on the US team shone brighter today than Geronimo Nores, the 18-year-old representative in the Boys' RS:X Class. Nores won all three races and leads with the low score of 2 points. (Each crew in every class gets to discard its worst finish after three completed races.)

“I'm pretty surprised, it's very exciting,” said Nores, whose first name is from his Argentinian mother and not a reference to the legendary American Indian. “It was a combination of good wind, being well rested and energized, and sailing well.”

Energy has been lacking for Nores in the past year. It was one year ago when he was diagnosed with diabetes while racing in France. It turned out to be such a severe case that he has a canine working dog, a 20-month-old yellow Labrador named Luna, by his side at all times to alert him if his blood sugar levels drop to dangerously low levels. Luna even goes on the coach boat to monitor Nores in between races.

“I spent a week in the hospital in France,” said Nores. “This year has been about recovering and getting back to sailing. I've had a difficult time competing, being on the water. It's amazing to see the progress I've made pay off on a day like today.”

Although Nores put forth a commanding performance, the Boys' RS:X Class is tightly bunched. Second-placed Nicolo Renna of Italy has four points, third-placed Aleksander Przychodzen of Poland has seven points, fourth-placed Fabien Pianazza of France has eight points, while Leonidas Tsortanidis of Greece and Jim van Someren of the Netherlands each have nine points.

Every class is tightly packed after the first day, a result of just one day of racing but also of well-prepared sailors. In the Boys' 420 Class, JC Hermus and Walter Henry of the U.S.A. lead by five points, but second through 10th are separated by just seven points. (Australians Otto Henry and Rome Featherstone are 8th, 10 points off the lead.)

“It felt good today,” said Hermus, the skipper who is on leave from the U.S. Naval Academy. “It was pretty fluky, there were some big shifts and some puffs came out of nowhere, so I'm happy for the consistent scores. We were just trying to stay out of the fray and survive the first day.”

In the Boys' Laser Radial Class, Argentina's Juan Cardozo and Norway's Uffe Tomasgaard each have eight points, but Cardozo holds the tiebreaker by winning the second race. Australia's Zac Littlewood and New Zealand's Josh Armit are also tied with nine points, but Littlewood holds third place over his trans-Tasman rival by winning the first race.

The Girls' RS:X Class sees New Zealander Veerle ten Have in the lead with two points, followed by Islay Watson of Great Britain with three points and Italy's Giorgia Speciale with five points.

The Girls' Laser Radial Class is led by Emma Savelon with three points, followed by Charlotte Rose of the U.S.A and Poland's Wiktoria Golebiowska, tied on five points. Rose, the gold medalist in the class last year, won the second race to hold the tiebreaker over Golebiowska.

Another returning gold medal crew, Carmen and Emma Cowles in the Girls' 420 Class, picked up where they left off last year. The sisters won both races and lead the class with two points. Great Britain's Vita Heathcote and Emilia Boyle, Spain's Julia Minana Delhom and Silvia Sebastia Borso di Carminati and Switzerland's Solene Mariani and Maude Schmid all have six points apiece for second, third and fourth place, respectively.

The Boys' 29er Class was the last one off the water this evening and Australians Henry Larkings and Miles Davey lead with the low score of three points in another tightly packed class. New Zealanders Seb Lardies and Scott Mckenzie hold second with four points, Italy's Federico Zampiccoli and Luca Fracassi are third with six points.

Racing is scheduled to resume tomorrow with another 23 races planned among the nine classes.