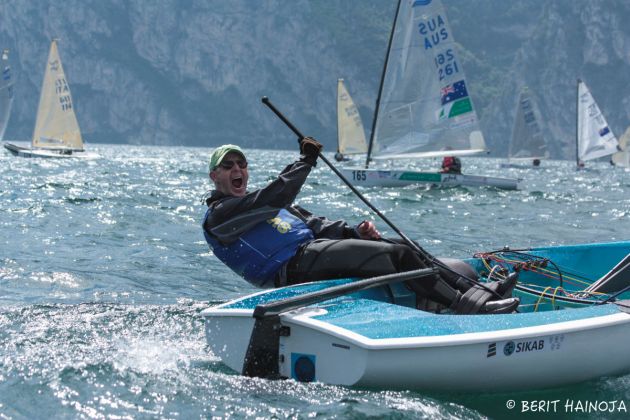 Circolo Vela Torbole tonight welcomed more than 355 Finn sailors from 32 countries for the opening ceremony of the 2016 Finn World Masters. There are Finns and Finn sailors everywhere you look, spread along the shore all the way between Torbole and Riva. Before the opening ceremony, the practice races were held in near perfect conditions with more than 250 Finns taking to the water to sample Garda's glacial waters.

Lanfranco Cirillo (RUS), who is sponsoring the event through his Fantastica Sailing Team, as well as sailing in the championship, spoke about the spirit of the Finn class and Finn sailors worldwide, an Olympic class for all, for the strongmen of the sailing world. “The Finn is not just a boat it is a lifestyle.” Not many present tonight would disagree with his sentiments.

Uppermost in everyone's mind though is that this event in Torbole is making history. The previous record of 273 entries has been far surpassed, though the forecast for the week has reduced the entry list from its previous higher numbers.

Sunshine and showers have been the predominant themes so far with lake Garda is not yet showing the conditions that it is famed for. Many of those who arrived early spent time watching a windless lake through the rain, while enjoying Italian hospitality.

The hope is that conditions will improve through the week, and certainly the practice races on Sunday produced the best conditions for the past week with sunshine and 14-18 knots of Ora marking a spectacular precursor to an event the fleet has spent two years looking forward to.

Even though the club is rather congested the sailors are making the most of meeting old and making new friends from across the world. For some The Finn Masters is their only event of the year.

Regardless of the damp conditions tonight, spirits are high, especially with the much awaited free bottle of Fantastica Sailing Team labelled wine for everyone from Cirillo, promised when he presented the bid to host the event two years ago. Finn sailors have long memories.

For some it is a first visit to Garda, for many it is a return to a hallowed sailing ground, but the interest of an event in Garda was always high. The fleet is now looking forward to a great week of racing. Eight races are scheduled from Monday to Friday, with a medal race for the top sailors on Friday.

Under the cliffs at the northern end of Lake Garda, four starts were arranged on Sunday to give the race team and sailors some practice. Colour groups didn't seem to matter much with a huge fleet starting on the first gun, eager to get the practice done and negotiate the tricky landing to head to the bar. From Monday, the 355 Finns will sail in four colour groups on two course areas. It will be some spectacle.

Competitors in Torbole include many former Olympians and many former champions. Increasing numbers of sailors are returning to the class for the great competition that it offers and the standard is rising every year. The defending champion is Vladimir Krutskikh (RUS), but he will have a tough job retaining the title with many new first time Masters, who have trained hard for this event.

Keeping with tradition is as much a part of the Finn class as great competition. The tradition within the Finn class is that once a Finn sailor, always a Finn sailor. And to prove just that, the 2016 Finn World Masters has attracted 33 Legends, those over 70 years old, who just can't seem to give it up. They are an inspiration to the fleet and proof, if any was needed, that Finn sailing remains a sport for life, as well as a lifestyle.