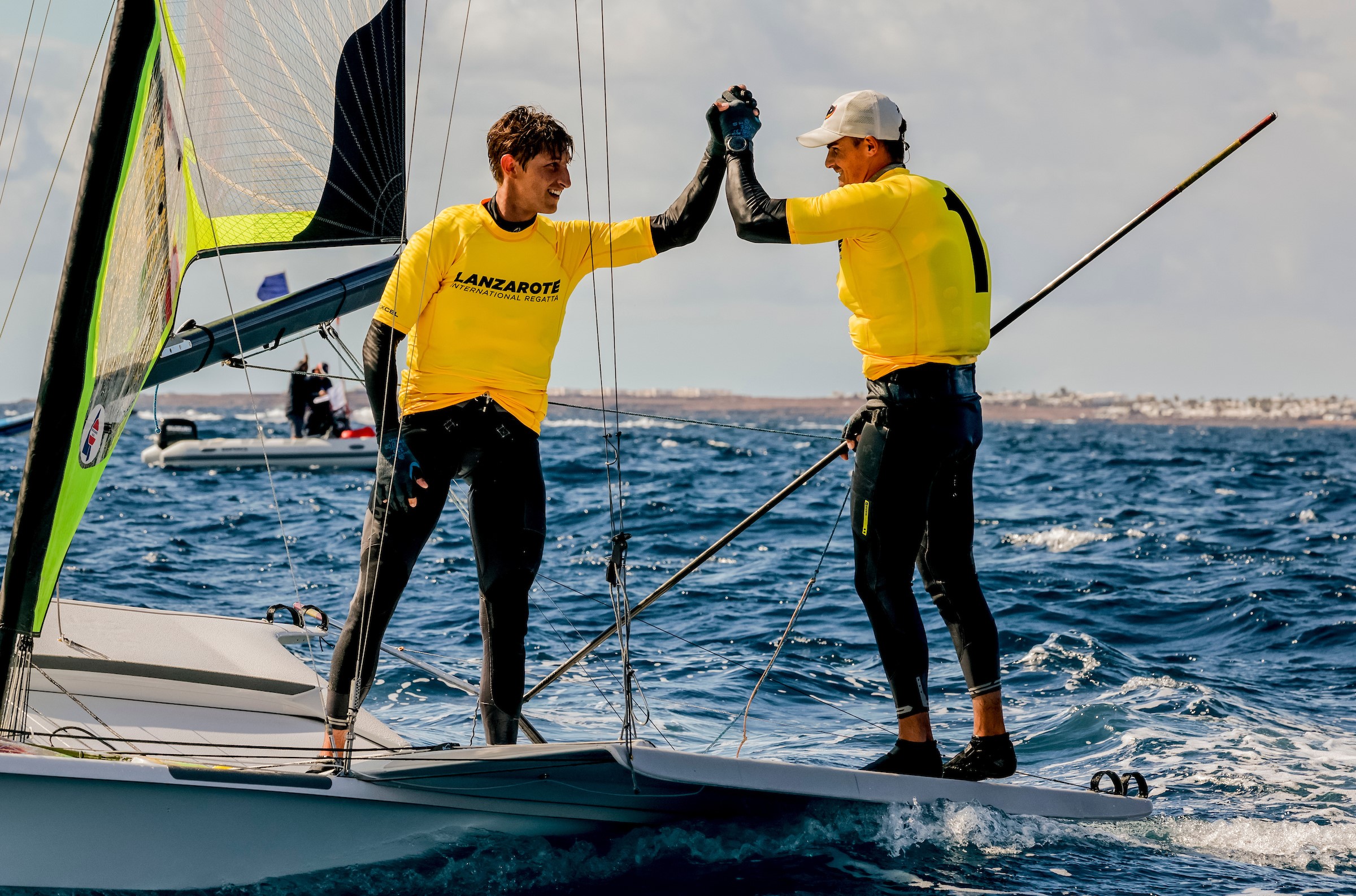 Canary Islands: The final of the second edition of the Lanzarote International Regatta begun with the 49er fleet, going out to a race course with almost no waves, with winds blowing between 14-18 knots.

After three races with the Papagayo beaches as a backdrop, the Spanish flag stood out in the men’s fleet. This flag is shared by Cantabrian Diego Botín and Catalan Florian Trittel, who are competing together for the first time in the Canary Islands, making their debut with this victory in Lanzarote. Although both sailors also won with their former partners a year ago on the island.

“We made our debut as a team and we have fulfilled with the result, but we have a lot of work ahead of us, this has only just begun towards Paris 2024,” the Catalan sailor said. “We chose Lanzarote to prepare for Tokyo 2020, and it was a great discovery, it is an incredible place to train in winter,” Botín added.

Silver was regained by the German pair formed by Jakob Meggendorfer and Andreas Spranger, after losing it to the Canary Islander based in Mallorca, Elías Aretz, and his Mallorcan partner, Albert Torres, who compete for the Real Club Náutico de Palma. The Spanish duo lost positions in these last races but has managed to stay in the top 10.

“A pleasure to sail in the Canary Islands, a luxury to sail with heat and wind, and with the best teams in the world,” said the Canarian sailor. For his teammate, “we are happy and eager to work and improve,” Torres said. For the Germans, “Lanzarote is an incredible location, although the competition was tough.”

On Saturday, the Spanish flag also stood out, the one from Andrés Barrio, sailor of the Real Club Náutico de Gran Canaria, who competes with Alicante’s Antonio Torrado, who achieved a seventh place, after putting on a show with a third place in the first race and a second place in the following race.

“Competing in the Canary Islands, my home, is a privilege, but it also helps to measure ourselves against all the sailors,” the Gran Canarian sailor said. The local favourites congratulates the race committee, since the conditions have been very complicated, but they have taken out quite a few races. “It has been a very complete regatta with a high level, very important for the season,” said the Valencian sailor, who says he feels “at home in this wonderful place.”

From the 49erFX field, Brazilians Martine Grael and Kahena Kunze emerged victorious, invincible after their first victory in the first race, three victories in total out of the 10 races sailed, plus a fourth place in the medal race. Although the Finns, Ronja Grönblom and Veera Hokka, followed closely behind, even taking second place in the medal race and the overall classification.

Third place went to Norway, represented by Helene NÆSS and Marie RØNNINGEN. “Lanzarote is a very special place for us, we were there last year during the pandemic, and we have done very good training in this paradise,” Kunze said. For Marine Grael: “These regattas are very good to put our training into practice.”

Representing Spain, Maria Cantero from the Canary Islands and Patricia Suarez from Galicia fought to stay in the top 10, finishing sixth after the medal race: “We are very happy to have been able to spend the winter season here in Lanzarote and that the regatta continues to be held every year, today we had onshore wind conditions, very gusty and unstable, being able to look out was the key to the regatta,” explained the sailor from Gran Canaria.

Norwegian Hermann Tomasgaard who is proclaimed champion of the ILCA 7, rose to the top on the final day. “It has been very nice to train and compete here in Lanzarote, incredible weather with good wind conditions, although there may be big waves or not, you train in front of anything.” After the Norwegian sailor, Nik Aaron Willim (Germany) gets the silver medal, followed by the British Michael Beckett.

From Spain it was finally the sailor from the Canary Islands who qualified in the top 10 after achieving a sixth place in the last regatta, but a 14th place in the medal race left him in ninth place in the overall classification. “Very good championship to continue the preparation for this new season, with different conditions and very good races, with a very competitive fleet, it is perfect to start the year, I leave with a ninth overall, which is not bad, but the result is the least,” the Canarian sailor concluded.

For the full results, see: https://www.lanzarotesailingcenter.com/lanzarote_international_regatta/resultados-sailti.php