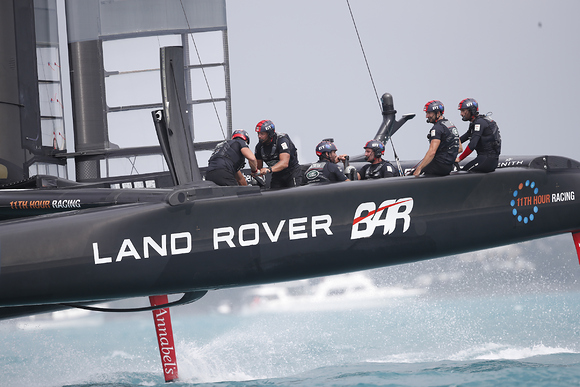 Land Rover BAR's first Challenge for the America's Cup ended today on the Great Sound, Bermuda, at the Louis Vuitton America's Cup Playoff Semi-finals. Despite the team's consistency on the start-line, and the rapid pace of development of their race boat, the team finished the semi-final 5-2 down to Emirates Team New Zealand.

A massive three race day concluded the Playoff Semi-Finals. The team sailed their race of the series, posting a win in race two and also achieving 100% flight, from start to finish.

It's just two days short of exactly three years since the British team – who have their home in Portsmouth – officially launched their long-term challenge to bring the Cup home to British waters. It's a vision that the team are as committed to now as they were at the official launch on that beautiful day at the Royal Museums Greenwich.

Today, Land Rover and 11th Hour Racing have both confirmed their commitment to continue their partnerships with the team. These will go alongside the existing partners already signed up for the team's next challenge, and the strength of the continued commitment from Land Rover BAR's Shareholders.

Land Rover will continue their support as Title and Exclusive Innovation Partner, and they will increase the technology and engineering resources and expertise offered to the team for the design and development of the next America's Cup race boat.

Alongside their goal to win the America's Cup, Land Rover BAR have put sustainability at the core of all the team's operations, working closely with Exclusive Sustainability Partner, 11th Hour Racing, a programme of The Schmidt Family Foundation. 11th Hour Racing will extend their support of the team to AC36 and the team's goal to become the most sustainable sports team in the world.

Sir Ben Ainslie, Land Rover BAR Skipper and Team Principal: “Firstly well done to Emirates Team New Zealand. But I was really proud of the way the team sailed both today and with our approach to this whole series. We struggled coming into this with a lack of speed for a number of different reasons. The whole team; the designers, engineers, shore team and everyone in the office have dug so deep to make us more competitive. We did that throughout this competition to the point that there wasn't a huge amount between the two boats today. It's a huge credit to our team – and a huge thank you to them, I couldn't be more proud. And a huge thank you to everyone back home in Britain for supporting us; we will be back next time and with support already in place today from Land Rover and 11th Hour Racing, I know we will be stronger.”

Mark Cameron, Land Rover's Experiential Marketing Director: “The Land Rover BAR team has accomplished so much and we are immensely proud of the partnership that has been forged. It has been an incredible success for us both in terms of engineering collaboration and the launch of our new Discovery which is why we are delighted to announce our continued support as Title and Exclusive Innovation partner for the 36th America's Cup.

“It would have been fantastic to have progressed further, but you cannot underestimate how significant Land Rover BAR's achievement has been. To win the Louis Vuitton America's Cup World Series outright as a rookie team and to successfully launch the Land Rover BAR Academy, also competing here in Bermuda, are real highlights for Land Rover.”

Wendy Schmidt, Co-Founder of 11th Hour Racing, President of The Schmidt Family Foundation, and Co-Founder of Schmidt Ocean Institute: “Having been involved with Land Rover BAR from the beginning we are very proud of the journey Ben and his team have brought us along to enjoy.

“We are also thrilled to have the opportunity to extend our partnership into the future – further strengthening our mission and engaging the international sports community on the environmental challenges we face across the world.”

In 2016 the team launched the Land Rover BAR Academy, to find and support talented young British sailors and create a pathway into the America's Cup. The team will race at the Red Bull Youth America's Cup, begining on Monday 12th June and concluding on the 21st June.