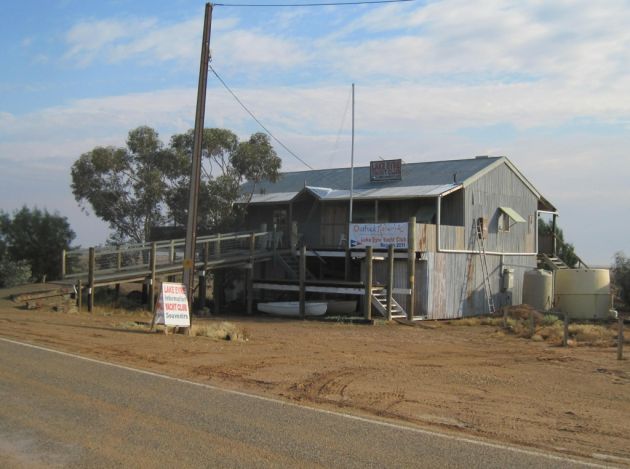 A yacht club in the desert in one of the most remote locations on earth is planning its first regatta in four years – but only if there’s enough water.

The Lake Eyre Yacht Club in South Australia sits on the shores of the continent’s largest lake and the thirteenth biggest inland body of water in the world.

It is also dry most of the time and only completely fills about four times each century – the last time being 1974.

But seasonal rains are beginning to arrive in Lake Eyre after flowing to the salt lake through a network of rivers that drain into a basin covering a sixth of Australia – about the size of Spain.

Lake Eyre Yacht Club Commodore Bob Backway said boats had not been on the main lake since 2011 but the recent rains had members excited.

“This rain has primed all the Queensland rivers, which is great. If we have what is considered another rain event in the first half of February then it would be fantastic,” Backway said.

“We’ll probably get boats out on the water in March because this time of year it’s just too hot.

“But we’re hoping that this follow-up rain will bring a proper flood down from Queensland.”

“We’re very excited about it. Everybody’s waking up in the membership and thinking about what to do this year but we’re all praying for follow up rain … if we get the rain it will be our best season since 2011.”

The club, located about 700km north of the South Australian capital city Adelaide, has 220 members from all over Australia and even some from the United States, United Kingdom and Germany.

It stores 10 boats in sheds at the club but the majority of members bring their yachts on trailers by road.

The closest community to Lake Eyre, William Creek, is 60km away and has a permanent population of six.

Backway said the club was planning a regatta in April on a lake in the area but probably not Lake Eyre itself. He said smaller lakes had more suitable camping grounds and were safer.

The last regatta hosted by the club was in 2012, on Lake Killamperpunna about 120km east of Lake Eyre. It attracted 42 boats and was held over six days across two divisions and included multiple classes.

“We typically have about 35 yachts and 120 people. We don’t like it to get much larger than that because it becomes unmanageable in such a remote area,” he said.

Backway said some members also cruised their yachts through the Simpson Desert on the Warburton River and Kallakoopah Creek – part of the network that feeds Lake Eyre – when there was enough water.

“Some places you’re sailing through Coolabah swamps, which is quite exciting, so it’s a real adventure.”

The club is located at Maree where the Oodnadatta Track meets the Birdsville Track. There’s a pub, general store, caravan park, airport and a few houses at Maree. The club has an excellent range of merchandise popular with the tourists – polos, vests, caps etc. Visitors are always made welcome.
– Chris Wilson