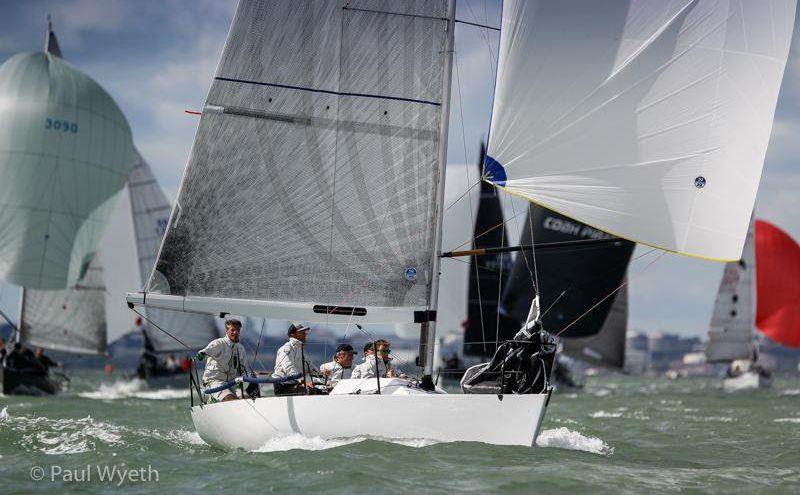 Winds ranging from 5 knots to 27 knots provided a thorough test for competitors at this year's Coutts Quarter Ton Cup, with few teams able to maintain a consistent performance across such a wide range of conditions, so for most, it was a very high scoring series.

However, Sam Laidlaw's Aguila dominated the front of the fleet throughout the Championship and put up an impressively flawless performance today, winning all three races.

Speaking after racing, Laidlaw said he was delighted to have finally got his hands on the legendary Quarter Ton Cup: “I'm really excited, because we've had a number of attempts at this and been in the top three on several previous occasions,” he said.

“The crew have been fantastic. Brett has done a great job of looking after and preparing the boat and has been sailing with me for a long time now. With Dan on the bow, Tom on the jib and Robbie too, we've got a very solid team.

“We couldn't have had two more different days. It's been a really well run regatta. It was a pity there was no racing on Wednesday, but I think it was the right call. The courses were very good and Rob Lamb did a great job, particularly in getting four races in on Thursday which was a real triumph.

“We haven't really made any changes to the boat for this season. We lost our mast in Cowes last year so had to replace that, but otherwise we've just had a lot of time in the boat, working on our crew work and making small tweaks rather than anything major. It's the crew who do all the work, I just sit at the back and steer.”

Apart from a shocker in the final race, Ian Southworth's Whiskers also sailed a consistent regatta, counting predominately first and second places to finish in second overall on 14 points. Third overall was taken by Mark Richmond's Cote on 29 points and fourth by Paul Gibbons' Anchor Challenge on 32 points.

The first start today (for Race 5) was postponed at the last minute when it became clear, in the words of Principal Race Officer Robert Lamb, that: “there was way too much interest in the port end of the line.”

The pin was moved six lengths downwind for the next start, but the fleet was still very keen to approach the line, with a couple of mid-line boats over with 20 seconds still to go, and a big bunch of boats rapidly piling into the pin end.

Now confident that the line was fair, Lamb signalled a General Recall and a Black Flag for the next start.

This time the fleet was much more line shy, getting away cleanly, with Mark Richmond's Cote winning the pin end, ahead of Whiskers. Richard Fleck's Per Elisa was also well placed, on the windward hip of Whiskers, while Louise Morton's Bullit looked good ahead of the other boats starting mid-line.

In the early part of the first beat, Whiskers, Mike Daly's Cobh Pirate, Blackfun and Peter Morton's Innuendo all went well left. At the first windward mark, however, William McNeill's Illegal came out with a commanding lead ahead of Cobh Pirate, with Aguila and Per Elisa rounding in unison in third and fourth places.

Aguila regained the lead on the second lap, while Whiskers crept up to second place both on the water and on corrected time on the run to the finish.

Further back in the fleet, two of the favourites for winning the Quarter Ton Cup – Tony Hayward's Blackfun (who started the day second overall) and Peter Morton's Innuendo – had a very disappointing start to the day, languishing in 16th and 17th places respectively.

Race 6 started cleanly, with the fleet much more spread along the line than in the first. Aguila led the fleet around the first mark, an impressive 40 seconds ahead of Whiskers.

While yesterday's downwind legs were a high-adrenaline battle to stay in control, today's were much more gentle tactical affairs in which gybing on the biggest wind shifts, while staying in the favourable tide in the north channel for as long as possible, was critical.

At the end of the second windward leg, Whiskers had narrowed Aguila's lead to less than three lengths. The former gybed at the spreader mark, with Illegal following in her wake, while Aguila continued on starboard for 150 metres.

The two leaders then closed each other, before Whiskers gybed onto starboard, and forcing her opponent to gybe almost simultaneously, crossing the finish overlapped, with Whiskers taking line honours, barely the length of the foredeck ahead of Aguila.

In Race 7 there were three premature starters, and a number of boats that returned unnecessarily.

Aguila again showed excellent speed in the softening breeze, but behind her there was a major shakeup in positions. At the end of the first leg, Per Elisa was second on the water, ahead of Cote and Cobh Pirate, positions they all held to the finish.

Whiskers and Blackfun, the top two boats at the end of yesterday's racing, both had a shocking race, well buried in the fleet and with the former almost failing to weather the spreader mark having hoisted the spinnaker prematurely.

As well as the main prize for the overall winner of the Quarter Ton Cup, the event also awards a raft of other prizes. The Roger Swinney trophy for boats other than the winners of the Open and Corinthian Divisions rating lower than 0.910 was won by Whiskers.

Terence Dinmore's Captain Moonlight won the prize for the oldest crew, with a combined age of 334 years, and Willie McNeill's Illegal the youngest (167 years). The oldest bowman, winning the walking stick, was 59-year old Led Pritchard of Whiskers. The Concours d'Elegance for the best-presented boat went to Lincoln Redding's Lacydon Protis.